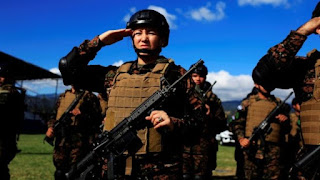 
They will monitor cross-border crime along 600km (375 miles) of the frontier shared by El Salvador, Guatemala and Honduras.


Increasing numbers of gang members commit crimes in one country and flee to another.


The new force was officially launched in a ceremony in the western Honduran city of Ocotepeque, near the point where the three countries' borders meet.
The three countries' presidents - Juan Orlando Hernandez of Honduras, Jimmy Morales of Guatemala and Sanchez Ceren of El Salvador - attended the ceremony.


According to InSight Crime, a foundation studying organised crime in the Americas, most of the migratory flow in the Northern Triangle comes from El Salvador where a government crackdown on gangs by security forces has been taking place.


InSight Crime says over 365 alleged Salvadorean gang members were arrested in the first ten months of the year.


Many El Salvador gang members who fled have set up their own gang structures in Guatemala.


Gang members have traditionally survived through extortion rackets but have increasingly become involved with drug cartels and the trafficking of drugs.


But critics say a tough-on-crime approach will not address the chronic poverty that drives young people to join gangs.


The region has one of the highest murder rates in the world, with the UN reporting murder rates in 2012 in Honduras standing at 90.4 deaths per 100,000 and El Salvador at 41.2 deaths.


An estimated 10% of the population in the Northern Triangle has fled danger, forced gang recruitment and dismal economic opportunities.