NANA AKUFO-ADDO HAS BEEN SWORN IN AS GHANA'S NEW PRESIDENT Heads of state from across Africa and thousands of guests and dignitaries watched him take the oath of office at a ceremony in the capital, Accra.
Mr Akufo-Addo, a 72-year-old former human rights lawyer, promised free high school education and more factories.
But critics have questioned the viability of his ambitions.
Taking the oath of office in the capital's Independence Square on Saturday, he promised to "protect and defend" Ghana's constitution.
He said he would reduce taxes to boost the economy, adding that Ghana was now "opened for business again". 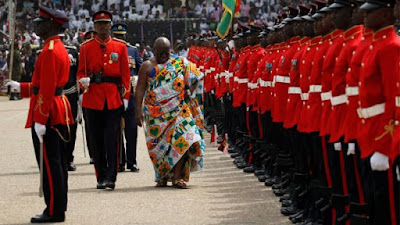 Mr Akufo-Addo later posted the full text of the presidential oath on the social media site Twitter, using the hashtag #Inauguration2017.
He tweeted that his position was was not an avenue for making money and that he would not disappoint the people of Ghana.

Other Side of the Room

The Pledge of Allegiance and Its Origins

What French painter Jacques-Louis David can teach you about marketing

How to Deal With Social Issues in the Medical Setting

University students in Beijing have been locked into two bunkers for 200 days, during which they will recycle their urine as part of a test

NANA AKUFO-ADDO HAS BEEN SWORN IN AS GHANA'S NEW PRESIDENT