Every Phone coming out these days has a dual Camera setup, but not many can boast three, this one can its Samsung's Galaxy A7 2018, it's just a ride so let's check it out.

So we have the box here and under the way it is the Galaxy A7 2018, let's take this plastic off and check it out pretty shiny, under that we have some reading material and here is the sim tool, there's a microUSB cable, no USB-C here it's bundled with a 7.5 watt charger and finally there's a pair of earbuds included in the box nice. 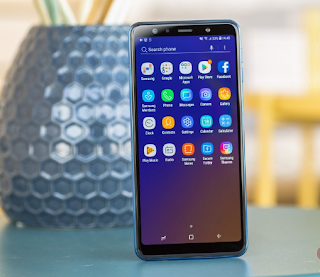 DESIGN
An eye-catching design- with the coating as shiny as this one the A7 is sure to turn some heads, the uniform metallic blue covers both the glass back and the aluminum frame, the glass is curved a little bit where they meet adding some extra shiny highlights down at the bottom we have a 3.5 millimeter jack for headphones, but what was Samsung thinking with this outdated microUSB port since last year's had USB C and what happened with the water resistance.

AMOLED DISPLAY
The Galaxy A7 has a 6 inch AMOLED display with a tall 18 point 5 by 9 aspect ratio unlike plenty of other mid-range phones these days the A7 doesn't have a screen notch cut out the selfie cam and sensors are embedded in the top bezel, the display itself has a 1080p resolution and content looks pretty sharp, we'll run some display tests and let you know how it does in our full review. In true Samsung fashion there's an always-on display too great if you want to check notifications at a glance there isn't a notification LED though if you were looking for a more power saving option.

UNCONVENTIONAL BIOMETRICS
The Galaxy a7 2018 has a fingerprint reader mounted on the side most phones have it either on the back panel or on the chin on the front, I can't say I'm a big fan of this it feels kind of slow to read and wake up the phone and maybe it's just me, but it didn't seem to respond a hundred percent of the time.

But one neat trick is that you can swipe down on the reader to pull down the notification shade making things easier if you're using the phone with one hand, there is face unlock too if you want to use that it seems accurate though probably not the most secure option.

We snap a couple of photos during the day for you to check out looks decent so far.

There's an intelligent scene optimizer too which can automatically adjust settings for you AI scene recognition is getting quite popular these days, the ultra wide cameras you take those super wide shots just a click of the toggle and you can catch all of your friends or a whole building and there's a 120 degree field of view. There's a bit of distortion at the edges but that's normal overall it's a pretty useful option to have.

Here's a look at the portrait mode on the a7 20-18 the D focus background is adjustable and edge detection looks mostly accurate so it looks like the depth sensor is doing something right.


DECENT CHIPSET
A decent mid-range processor- the A7 2018 runs on Samsung's Exynos 785 chipset, an upgrade over last year's Exyno 7880, it runs on 8 cortex A73 cores instead of the A53 cores of last year, along with increased RAM at 4 or 6 gigs it should result in a nice performance boost.
From what we've seen so far the UI Samsung experience 9 seems to run quite smoothly too.

So there you have it guys the A7 2018 seems to be a solid mid-ranger with some cool camera options, I'm not a big fan of them moving the fingerprint reader though and losing the water assistance and USB-C port of last year what do you guys think, let us know down in the comments below as well as any questions you might have and we'll try to answer them in our full review coming soon.