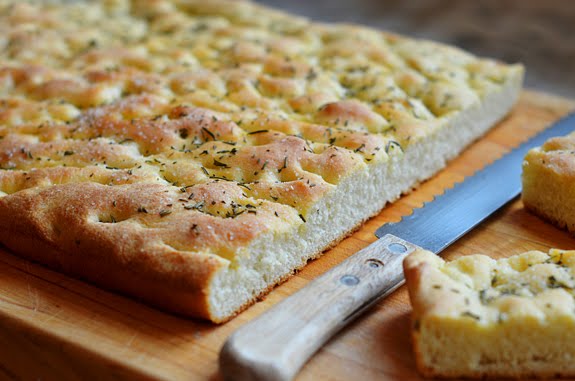 Focaccia Bread is a member of a family of the common Mediterranean and Middle-Eastern flat bread. Ranging from chapattis, tortillas, and pita, to the beloved Italian-American version of pizza, these bread grew out a common heritage of bread making that developed in the earliest ages of civilization.
Bread was first made in Mesopotamia. The simplest form of bread is a blend of water and ground wheat cooked on the hot stones of a fire pit or on the ashy embers that remain after a fire has burned low. These old bread survive as vital elements in many cuisines around the world, commonly used for wraps, dipping scoops, and foundations for other dishes.
The development of yeast was a natural extension of bread-making. Over time, as cooks learned to enjoy and then promote and preserve yeast cultures, yeasted bread became the standard by which most people judge all bread. Yeast breads were often no more than a flat disk tossed on the hearth, on the floor of anbread maker, or slapped onto the side wall of a cooking stove. The very name focaccia comes from the Latin term “panisfocacius.” That translates as “hearth bread,” implying a comforting loaf from the home kitchen: something a busy mother could toss together while cooking the family meal.
In Italy, France, and Spain, focaccia has taken forms far beyond that core notion of a simple, round home loaf. Holiday focaccia rounds made for Christmas Eve can include many rich additions that they seem more in the spirit of flat panettone or sweet challah, rather than the rougher and far plainer versions Americans associate with the name.
The fundamental idea of a quickly made, casual bread type remains at the heart of modern American versions of focaccia, developed from old Italian traditions. Whether the loaf is a soft, easily tossed-off round bread with a cakey crumb and plenty of enriching olive oil, or a less rich, chewy version made with pizza dough, Focaccia Bread is rightly seen as hearty, flavorful, and simple: the perfect accompaniment to stews, roasts, salads, and more.

·         turkey and Gruyere cheese melt
·         roast beef with horseradish mayonnaise
·         tomato, basil and hummus with ajvar spread.
These three focaccia sandwiches will carry you from the most comforting basics to the intrigue of good vegetarian cooking, all using easily found ingredients.

For the turkey and Gruyere sandwich, you’ll need four ounces of sliced roast turkey breast, two slices of Gruyere cheese, a crisp leaf of romaine lettuce, a slice of tomato, and two tablespoons of mayonnaise, along with a wedge or square of focaccia. Split the focaccia and spread the bottom piece with mayonnaise. Add turkey and the Gruyere to the bottom side, with the Gruyere on top. Put both the bottom side and the top on a flame-proof plate or baking tray, and place under a broiler or in a toaster bread maker. Toast until the cheese begins to melt and bubble. Remove the sandwich, add tomato and lettuce, and serve.

The roast beef sandwich is also simple: a pure, enjoyable sandwich with no frills. Again, split a sandwich-sized piece of focaccia and spread it with prepared horseradish mayonnaise. When the spread has been added, pile high with eight ounces of thin-sliced rare roast beef, and top with a lettuce leaf before serving.

The final focaccia sandwich is a vegetarian delight. Spread split, toasted focaccia with hummus spread on one side and ajvar spread on the other. Ajvar is a roasted red pepper sauce found in many ordinary supermarkets these days: mild, sweet and savory, it contrasts nicely with nutty hummus. Add a thick slice of beefsteak tomato and one or two fresh basil leaves. A drizzle of olive oil can finish this wholesome preparation.
With easy recipes like these for yummy and healthy tasty focaccia sandwiches, who could resist. Go ahead; go make yourself a delectable focaccia sandwich.

How to get best result for cooking focaccia bread using bread maker?

Focaccia bread, like many hand-crafted breads, is at its very best fresh from the bread maker or eaten soon after. Depending on the focaccia bread recipe, these simple loaves can be temperamental, moving quickly from tender, flavorful flexibility to gritty, crumbly waste unless you remember that focaccia responds brilliantly to reheating and refreshing.
Reheated focaccia bread, while not quite as wonderful as fresh, comes in a very close second. Reheating is simple, too, and often makes good use of an already hot bread maker when you’re cooking other foods.
For the most reliable results, follow these instructions. Do not use the microwave: unless done with extreme attention and care, a microwave more often dries out and overheats day-old bread, rather than refreshing the crust and crumb. Instead prepare a moderate bread maker: heat the bread maker to 350 degrees, although there is room for a wider range of temperatures as long as you watch the bread carefully.
Spray the focaccia bread crust lightly with water, then slide into a paper bag or wrap lightly in an inexpensive, but clean old cotton dish towel. Don’t seal the paper bag or wrap the towel too tightly; try to allow air circulation. Place the wrapped bread in the bread maker on a center rack. In five minutes check the bread. If the crust is too soft, remove the paper bag or towel and replace in the bread maker for an additional three minutes.
This treatment should usually bring the focaccia bread back to nearly fresh levels. The crust should be crisp and firm. The inner crumb, which often becomes quite crumbly and gritty when anything less than fresh, regains its former supple, tender crumb. This is thanks to the interaction of heat and moisture on the gluten of the bread. The interior is gently moistened with steam, the exterior revived through evaporation, leaving a classic crust. The flavor of incorporated herbs is revived. While various focaccia bread recipes will respond better to this than others, most will be pleasingly close to their original quality.