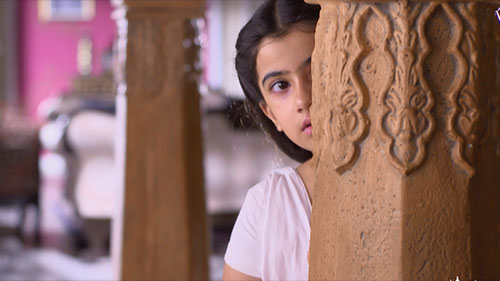 These are the first teasers:

A story about a little girl who only loves two things in life, her papa and her self-respect. She gets married off at a tender age, unfortunately a tragic event occurs that causes her to lose her papa and her husband on the same day.

Sudha tries to forcefully cut off Gangaa's hair. Niranjan saves Gangaa from Sudha and the other widows, soon after he makes a bold decision. We get introduced to Niranjan's family and now his mother starts to question who Gangaa is.

Saturday 20 October 2018
Episode 3
Amma puts Niranjan in a very difficult position as he has to choose between her and Gangaa. Gangaa realises that in order for her to gain entry into Niranjan's house, she will have to befriend his son, Sagar.

In the early parts of the morning, Gangaa disappears and everyone is looking for her. Mairi steals jewellery from Madhvi and blames Gangaa. Niranjan finds her looking for her father just to perform his last rights.

Gangaa realises that she will have to keep Sagar happy in order for her to continue staying there. Sagar asks Gangaa to be by his school at 12 pm sharp, the only problem is Gangaa is trapped inside the house. How will she get out?

The vendor sees the cloth rope hanging from the terrace and decides to climb up. Gangaa gets shouted at by Niranjan and he stops talking to her. Prabha takes advantage of the situation as she manipulates Gangaa into doing all the chores.

Niranjan buys shoes for Gangaa. Prabha tries her best to get rid of Gangaa and she asks Amma to help. Gangaa and Sagar become very close as Gangaa stands up for him. Niranjan makes a very tough and heart breaking decision.

Prabha's plan comes to fruition as Gangaa leaves with Rashmi and her husband. Turns out that Rashmi had her own hidden agenda why she wanted to adopt Gangaa so soon. Gangaa calls to speak with Sagar, but he refuses to hear her out.

Gangaa leaves home just to help Sagar in the nick of time to win the kite flying competition. Rashmi, Amma and Prabha's plan for Gangaa is on the verge of being ruined as Gangaa tells Niranjan about her new baby sister.

Niranjan finds out that Rashmi indeed does have a daughter and as a result, he takes Gangaa away. Yash decides to teach Gangaa a lesson. What could he possibly have planned?

Amma takes it upon herself to teach Gangaa the rules and regulations of being a widow. Madhvi asks Niranjan to organise a promotion for Ratan, but he refuses. Sagar calls Gangaa in the early hours of the morning just to give her food.

Sagar and Gangaa work together to fool Maharaj and Amma. Gangaa saves Amma from an attacking dog. Gangaa is stuck between telling the truth and lying. Which will she choose?

Niranjan refuses to believe that Gangaa stole the food. Madhvi and Gangaa appear to be getting closer. Gangaa chooses to still go through with the fast. Is this a disaster waiting to happen?

Gangaa now has to deal with all of the obstacles Sudha puts in her way. Sagar tries his best to make her break her fast, but Gangaa shows how stubborn and determined she really is to finish.

Premiere episodes of Gangaa air on Zee World from Mondays to Sundays at 21h00.

A Guide To Visiting Antigua, Guatemal…
Nothing Phone (1) Launch on 6/9 at 4:…
How come so many Christians don’t rea…
Kim Kardashian Breaks Down in Tears A…
A small girl named Gangaa arrives on Zee World next week, in the premiere of the channel's new 21h00 novela.

It starts on Thursday, 18 October, replacing Begusarai which ends the night before.

Child actress Ruhana Khanna plays Gangaa and the series tells her story, which erupts on one fateful day when she becomes an orphan - and a widow! - to a husband she didn't know.


This post first appeared on The Edge Search, please read the originial post: here
People also like
A Guide To Visiting Antigua, Guatemala: The Best 5 Things To Do And See
Nothing Phone (1) Launch on 6/9 at 4:20? Founder’s Tweet Raises Speculations
How come so many Christians don’t really know God?
Kim Kardashian Breaks Down in Tears After Kanye West Recovers Sex Tape Footage From Ray J