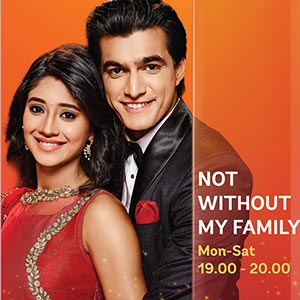 Coming up on Not Without My Family this September 2018:

Saturday 1 September 2018
Episode 2081
Naira behaves rudely with Kartik when he tries to console her. Akshara waits eagerly to meet Tina. Naira calls Naitik from Akshara's phone. Later, she hides from Akshara when Naitik calls back.

Kartik saves Naira from a few goons. Naira tells her friend about Akshara. Meanwhile, Akshara learns that Tina is Naira when she discovers that she is from Udaipur.

Akshara is delighted to see Naira. But, Naira refuses to reveal her identity to her. Later, Akshara requests Naira to return home. Tejani asks Negi to vacate the orphanage. Akshara tells Varsha about Tina's true identity.

Varsha suggests that Akshara should convince Naira to return. Kartik apologises to Naira for his misbehaviour. Naira agrees to return to Udaipur, only if Akshara supports the orphanage.

Naira tells the children about going back to Udaipur. Akshara shares the good news with Naitik. The Singhanias make arrangements to welcome Naira.

Naira decides to leave the house. Akshara is dejected with Naira's rude behaviour. The family is also worried on seeing her strange behaviour. Meanwhile, Varsha questions Shaurya about a deal with the client.

A dejected Akshara questions Naira about her rude behaviour. She asks Naitik to find the reason behind it. Later, Naitik tells Akshara that Naira hates her and that she had left the house because of her.

Akshara apologises to Naira for her mistakes. Naitik tries to clear the misunderstanding between them. The Singhanias decide to mend Naira and Akshara's relationship. Later, Naira and Kartik bump into each other.

Kartik visits the Singhanias to meet Naitik. Naira is shocked to see him. Meanwhile, Jasmeet's cousins discuss about their plan to stay at the Maheshwari House.

Naitik thanks Kartik for helping Akshara. Naira refuses to forgive Akshara. Later, she tells the family that she will go back to Haridwar after a month. Naitik and Naira have a chat.

Nani asks Akshara to stop Naira from leaving the house. Naira falls ill and faints. Ranveer and Ananya visit the Maheshwaris. Akshara decides to leave the house. Why?

Naira confronts Kartik for interfering in her personal matters. Ananya is surprised to meet Naira. Meanwhile, Kuhu locks Happy and his parents in a room.

Naitik apologises to Akshara for blaming her and promises to mend her relationship with Naira.

Tuesday 11 September 2018
Episode 2097
Naitik informs Kartik about leaving for Nigeria along with Naman to help Manoj. Meanwhile, Akshara apologises to Gayatri and Naksh for her conduct.

Naksh tests Naira's feelings for Akshara. Kartik overhears Naira telling someone that she hates Akshara. But what is he doing in Naira's room?

Kartik becomes a paying guest with the Maheshwaris. Naira visits the Maheshwaris with Akshara. Meanwhile, Naira does something to make Akshara happy.

Naira misses her father. The family suggests that Naira join the dance academy. Meanwhile, Naman and Karishma are keen to get the file that Kartik gives to Akshara.

Naira decides to fulfil Naitik's dream of starting a dance academy. Meanwhile, will the Singhanias accept Yash's marriage to Rose?

The Singhanias are shocked to see Rose in an Indian attire. Meanwhile, she is upset for failing to impress Yash's family. Later, Akshara is happy to see Naira working towards fulfilling Naitik's dream.

Rukmini asks Yash to come home with her. Naira and the Singhanias play a prank on Bhabhima. Bhabhima is elated to meet Naira. Later, Vishambharnath grows suspicious on seeing Kartik in the house.

The Maheshwaris visit the Singhanias. Later, the families play a game. Akshara gets emotional when Bhabima asks Naira to show how she reacted when she met Akshara at Rishikesh. Will Bhabima accepts Yash's relationship with Rose?

Naira dances at Bhabhima and Devyani's insistence. Rajshri asks Varsha to gather information about Kartik. Naira challenges to prove Rose as a perfect girl for Yash. Will Rukmini let her succeed?

Rukmini agrees to help convince Nandini to accept Rose and Yash's relationship. Later, Naira gets injured while playing basketball with the family.

Kartik apologises to Akshara and Naira. Nandini is not happy with Yash and Rose's wedding announcement. Will Yash go against Nandini?

Akshara tells the family about Rose's parents. Nandini finally agrees to Yash and Rose's marriage. Later, Akshara and Naksh realise that they need a degree in dance before opening their academy!

Tuesday 18 September 2018
Episode 2109
Akshara tells Naitik about Yash and Rose’s marriage. Naira is surprised to see Pungi at Singhania House. Meanwhile, the Maheshwaris search for Ananya's gold chain. Who has stolen it?

On learning that the Kohlis are the Maheshwaris' tenants, Kartik confronts them for cheating. A grateful Rajshri thanks Kartik for helping Vishambhar. Later, Kartik apologises to Vishambhar for his past behaviour.

Kartik agrees to stay with the Maheshwaris. Rukmini gets busy with the arrangements for Yash and Rose's engagement. Meanwhile, Rose's mother goes to Rukmini's house.

Martha opposes the idea of celebrating her daughter, Rose's engagement as per Indian customs and shares her past with Akshara.

Thursday 20 September 2018
Episode 2113
Yash and Rose get engaged. The boys and girls compete against each other in a dance contest. Later, Mr. Kohli apologises to Kartik for his mistake.

Mohit confronts Anmol for behaving strangely with the family. Naira punishes Anmol and his friends for teasing Pungi. Later, Mohit insists that Anmol apologise to Pungi.

Gayatri shares her feelings for Kartik with Rose. Akshara tells the family members that Martha wants Yash and Rose to get married in a church! Gayatri takes up the responsibility of organising the wedding.

An auspicious date is set for Yash and Rose's wedding. Vishambhar asks for Rukmini's approval to organise Yash's sangeet at their house.

Naira stops Kartik from leaving when the Kohlis are asked to vacate the house. Together they select a church for Yash and Rose's wedding. Meanwhile, the family awaits a special guest.

Kartik is in love with Naira. Rose asks him and Gayatri to dance at her sangeet. Naira secretly gets food for someone in her room. Who is that?

The Singhanias attend Yash and Rose’s engagement. Akshara gifts a necklace to Rose. Later, Naira warns Kartik not to interfere in her dance performance.

Akshara welcomes Salman Khan on the stage, and Rose gives a superb dance performance with him. How will the family react when they learn that Kartik has invited a Salman Khan look alike to the party?

Tuesday 25 September 2018
Episode 2121
Naira dances with Kartik after Gayatri injures her leg. Meanwhile, Akshara learns that Naira is helping Chandu to escape from the police. Will she support Naira this time?

Naksh feels intimidated by Kartik's presence in the house. All the family members get dressed up for the mehendi ceremony. Later, Kartik recites a romantic poem for Naira, which makes Akshara question him.

Martha and Nandini apply mehendi on Rose and Yash's hands. The Singhania and the Maheshwari men recite poems for their wives. Later, Pungi assaults Anmol and his friends for insulting her.

Akshara reaches the warehouse to find the necklace. Two truck drivers knock her unconscious and steal the necklace from her. Meanwhile, Naira and Kartik learn that Akshara is in trouble.

The family is worried about Akshara. Later; Akshara manages to send her location on Naira's phone but will Naira and Kartik be able to trace her?

Yash plans his bachelor party at his house with Naksh and Kartik. Meanwhile, Naira too has plans to party with the girls!

Kartik mistakes Naira to be a ghost. Later, Naira and the girls try to scare the boys. Meanwhile, Mishti and Kuhu get drunk!

Akshara confronts Anmol for bringing alcohol to the party. Rukmini is angry with Rose's friends for serving alcohol to Mishti and Kuhu.


Premiere episodes of Not Without My Family air on Star Life at 19h00 and 19h30 from Mondays to Saturdays.