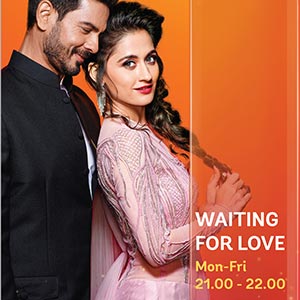 Coming up on Waiting for Love this September 2018:

Kamini is puzzled to find that Madhav has taken his ring back. Further, she tries to reveal her intentions of breaking up with Madhav.

Madhav promises to divorce his wife and requests Kamini to reconsider her decision. Later, to surprise Kamini, he takes her to the airport.

Rajmaata refuses to allow Kamini as long as Vijayalakshmi stays at the palace. But, surprisingly, she invites Kamini and her family for tea!

Kamini's father questions Madhav about his previous relationship. When Kamini's family is about to leave, Vijayalakshmi arrives!

Kamini faints after sharing an intimate moment with Madhav. Later, Heena too faints after eating the sweets sent by Rajmaata!

An excited Kamini goes wedding shopping. Mr. Mathur does not disclose about Kamini's wedding to Mili.

Reporters spread rumours about Kamini, considering her absence on the sets! Where is she?

Vijayalakshmi removes Madhav's belongings from the palace. Shockingly, she blames Ali Bhai for poisoning Kamini during her visit!

Rajmaata confides in Prathap about her fears regarding Vijayalakshmi. Later, Madhav shows up at a book event to surprise Kamini.

Kamini and Madhav challenge each other in a cooking contest. Further, Vijayalakshmi deceives Madhav into believing that his daughter hates him.

Rajmaata is worried about the divorce papers. The Mathurs face problems regarding income tax. Will they learn about Rana's involvement in it?

Madhav is shocked to find his signature on the receipt. Kamini gets a big world tour offer. Later, over a phone call, Kamini and Madhav get romantic.

Madhav receives the divorce papers while Rajmaata and the Mathurs fix the wedding date. Arunoday gets a tip-off about an IT raid on Kamini!

Arunoday informs his wife about Raghu's tip-off. As Kamini leaves for Delhi, Suyash follows her!

Kamini and Madhav manage to evade Suyash as he finds them in a hotel. An unknown person stabs Kamini. Will she be alright?

Kamini is in a fix on learning about the income tax raid. She decides to visit her house and accompany her parents. Will Arunoday agree to it?

As Arunoday condemns the department personnel, Karanveer comes to their rescue and offers to buy air tickets for the Mathurs.

Rana asks the IT officer to keep an eye on Kamini. He yells at Suyash for the news telecasted on his channel. Why?

Tuesday 18 September 2018
Episode 33
Arunoday and family manage to evade the income tax department's car. Arunoday restricts Kamini from shopping for her marriage. Why?

While Rana shares his plan of putting Kamini on the IT department's radar, Vijayalakshmi reveals her master plan to wreck Madhav!

Rana and Vijayalakshmi conspire against Madhav and Kamini while the priest learns about Kamini's marriage! Now, what?

Suman instigates Kamini to switch on her mobile and make a video call to perform a puja for the couple. They succeed in tracing her whereabouts.

Thursday 20 September 2018
Episode 37
Rajmata asks Madhav to carry the traditional sword for his marriage. Madhav learns that Vijayalakshmi went to a temple to perform a puja.

Rana and Vijaylakshmi plan to cancel Madhav-Kamini's wedding. Rana tells that Madhavi will be staying with Vijaylakshmi which enrages Madhav.

Madhav warns Rana to stay away from Madhavi. However, Rana asks Madhav to choose between Madhavi and Kamini. Who will he choose?

Madhav is in a dilemma as Rana asks him to choose between his daughter and Kamini. He cancels his plan of visiting Kamini. Why?

Madhav makes his choice. On the other hand, Kamini gets ready to start a new life with Madhav.

Kamini wears her bridal dress while, Prathap is asked to break the shocking news to her!

Kamini is shattered when Pratap tells her that Madhav has refused to marry her. Will she ever be able to accept the truth?

Kamini is in shock after receiving Madhav's letter. Can Madhav explain himself to her?

While Madhav reveals his feelings, Kamini puts Madhav's memories on fire. Is this the end of Madhav and Kamini's love story?

Thursday 27 September 2018
Episode 47
Upset with her failed marriage, Kamini slits her wrist! Rana Saab has an offer for Madhav and Rajmaata. What is it?

Rajmaata agrees to Rana Saab's terms, while Kamini breaks all ties with Madhav. Vijayalakshmi deceives Rajmaata to win over her trust.

Karnveer ensures that Shekhar doesn’t say anything to the media about Kamini cancelling the marriage. Later, Kamini is arrested! Why?

Premiere episodes of Waiting for Love air on Star Life at 21h00 and 21h30 from Mondays to Fridays.