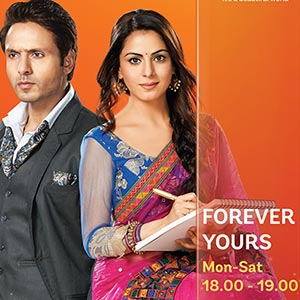 Coming up on Forever Yours this September 2018:

Lavanya is furious when her husband defends Paakhi. She gets upset when Girish’s Bua comes home but Bua brings a guest, who ends up making Lavanya happy. Meanwhile, Paakhi continues to struggle with the house budget.

While Paakhi tries to tighten the household budget, Lavanya remains upset with Bua’s presence in her house. But more trouble comes Paakhi’s way when she and Anshuman get stuck in an elevator at a construction site.

While Paakhi gets injured on the construction site, Lavanya gets upset when she finds out that she is spending more time with Anshuman. Buaji annoys her further by praising Paakhi and asking Anshuman to take care of his wife.

Naina’s presence keeps reminding Lavanya that she cannot have her own child. Back in Anshuman’s house, Paakhi confronts the servants about the missing items in the kitchen. She is later surprised when Anshuman asks her out for lunch.

Anshuman asks Paakhi to organise a business party at his house but Girish finds out that this is his plan to humiliate Paakhi and asks him to tell her the truth. Can Paakhi manage to fit the party’s expenses into the week’s budget?

As the cooks in the house go on leave, Paakhi decides to cook food for Anshuman’s party herself. Meanwhile, Lavanya suspects that Girish is having an affair. Back in the house, Mahaji comes up with an evil plan to spoil Paakhi’s cooking.

Lavanya’s suspicion grows when she finds a picture of a girl in Girish’s phone. Meanwhile, Mahaji manages to ruin the expensive crockery inside the dishwasher. Will Paakhi’s party planning turn into a disaster?

Episode 18
Anshuman is surprised to learn that Paakhi actually managed to save money despite making the party a success. Meanwhile, as Lavanya accuses Girish of cheating on her, Anshuman tries to come up with a plan to get Paakhi out of his life.

Paakhi threatens to fire the servants when she finds out that they lied to her on the day of the party. Meanwhile, Anshuman includes Lavanya in his plan and asks her to invite Paakhi for a get-together. What does Anshuman have in mind?

Anshuman asks Rana to be patient when he accuses him of betraying him. He then asks Paakhi to participate in a tennis competition with him. Is this part of a new scheme to embarrass Paakhi?

Even as Girish helps Paakhi improve her tennis skills, Anshuman decides to make things difficult by hiding the rules of the application form. Paakhi’s real challenge comes when she learns about the dress code for the competition.

Episode 22
Anshuman is forced to withdraw from the tournament when Paakhi refuses to wear a mini-skirt. Mrs. Jaisingh insults Paakhi and Anshuman when she learns about this.

Episode 24
Anshuman advises Paakhi to go back to Chittor to her old life. Paakhi’s brother is also keen to leave after being insulted by Lavanya. Meanwhile, Rana invites Anshuman to a party and asks him to humiliate Paakhi in front of everyone.

While Lavanya is forced to take care of Naina in the absence of Girish and Buaji, Anshuman is relieved when Paakhi leaves with her brother. However, he has no idea that Paakhi is not going to give up so easily. What is Paakhi’s next move?

Paakhi’s western outfit takes everyone at the party by surprise. Paakhi’s brother takes this opportunity to humiliate Lavanya at the party. The incident leaves Rana fuming with rage. How will Anshuman react to Paakhi’s return?

Lavanya enjoys taking care of Naina, but Girish remains nervous about approaching her with the topic of adoption. Meanwhile, Paakhi gets hold of Anshuman’s divorce papers and asks him for a gift if he wants them back.

While Anshuman tries to figure out what Paakhi wants, Lavanya is convinced that she is going to ask him for a child. However, Paakhi soon gives Anshuman the final clue to her request. Will Lavanya and Anshuman’s fears turn out to be true?

Anshuman is reluctant to let Paakhi meet his son Ayaan, who is about to return home. Lavanya also feels that Paakhi can’t be a real mother to Ayaan. However, Paakhi decides to pay a surprise visit to Ayaan at his school.

Episode 30
Lavanya is upset to find Naina’s adoption papers in Girish’s cupboard. Meanwhile, Anshuman loses his temper when Ayaan attempts to drive his car. While he decides to send his son back to boarding school, Paakhi asks him to be patient.

Lavanya blames Paakhi for Anshuman’s decision to send Ayaan to boarding school. Paakhi asks Anshuman to give her more time to change Ayaan. While she remains confident that she can connect with her stepson, Ayaan has planned a new prank.

Ayaan lies about Paakhi to his History tutor and even seeks the servants’ help to annoy her. Paakhi, on the other hand, asks Anshuman about Ayaan’s likes and dislikes in order to connect with him.

Paakhi asks Anshuman for tips to impress Ayaan and soon comes up with a mischievous plan to connect with him. However, she later finds him crying in his room, missing his birth mother. Is Ayaan playing a new trick to get rid of Paakhi?

Anshuman follows Paakhi to the market to find out why Ayaan asked her to get a nylon rope. But while he looks for clues, Paakhi finds herself surrounded by a bunch of goons. Will Anshuman come to her rescue?

Saturday 15 September 2018
Episode 35
Ayaan tells his History tutor that Paakhi beats him and doesn’t feed him properly. Meanwhile, Lavanya invites Anshuman’s family for a party. Ayaan tells Paakhi that he would come to the party later with the driver.

While Ayaan tells his teacher that Paakhi locked him up inside a cupboard, Lavanya informs the guests about her decision to adopt Naina. On returning from the party, Paakhi is surprised to find the History teacher’s purse in her bedroom.

Ayaan asks Anshuman to take Paakhi out for ice-cream and then calls up his teacher to complain about Paakhi. However, he accidentally calls Anshuman and Paakhi ends up hearing the whole conversation. Will she find out about his plan?

Ayaan’s teacher gets Paakhi arrested for child abuse. Paakhi is shocked and sad to learn about Ayaan’s hatred towards her. While Girish yells at Anshuman and Lavanya for not stopping Ayaan, Paakhi’s challenge is to prove her innocence.

Even as Paakhi’s bail application gets rejected, Ayaan refuses to admit that he was behind her arrest. Meanwhile, Rana is pleased to learn this and advises Anshuman to let her stay in jail. Paakhi now faces painful interrogation in jail.

Reluctant to accept Rana’s proposal, Paakhi’s immediate wish is to see Ayaan. Meanwhile, Ayaan’s teacher takes back her complaint as soon as she learns about Paakhi’s innocence. Ayaan and Mahaji start to worry about Paakhi's release.

Paakhi confronts Mahaji about her lies and demands an apology. Ayaan is equally scared after Paakhi’s return and decides to ask Anshuman for help. But Anshuman decides to punish him for his misdeeds. Will Paakhi also get tough with Ayaan?

Ayaan’s disappearance puts everyone in a state of panic. But they are soon relieved when Paakhi finds him and brings him back. Anshuman gets mad when he learns that Ayaan had left the house out of guilt.

Ayaan is confused when Paakhi asks Anshuman to be gentle with him. Meanwhile, Girish feels guilty about hiding the truth about Naina’s parents from Lavanya. Anshuman, feels uncomfortable when Paakhi asks him to plan a secret picnic.

After having fun at the picnic, Ayaan receives another surprise gift from Paakhi. Meanwhile, Lavanya is shocked to learn that Girish is Naina’s real father. Paakhi feels she is finally going to find happiness with her new family.

Episode 46
Anshuman makes Ayaan think that Paakhi wants to send him to boarding school. Meanwhile, Lavanya is furious at Girish for hiding the truth about Naina from her. Paakhi must now find a new way to tackle Ayaan’s hatred.

Paakhi tries to get Anshuman and Ayaan in the same room. But Ayaan turns her plan around with a trick of his own. Anshuman, on the other hand, faces a new problem when he learns that Tanya is arriving.

Episode 48
Tanya’s arrival creates tension in the Rathore household. Despite Anshuman’s best efforts, she eventually finds out about his marriage to Paakhi. Meanwhile, Paakhi is still trying her best to win Ayaan’s love.

Tanya tells Paakhi that she needs to spend more time with Anshuman for her book. Paakhi has no idea about her true intentions and is in for a shock when she learns that Ayaan wants to go to boarding school.

Episode 50
Lavanya refuses to forgive Girish for his lies and demands a divorce. Meanwhile, Paakhi decides to change Ayaan’s mind about going to boarding school. On the other hand, Tanya presents Anshuman with a tricky challenge involving Paakhi.

Tuesday 25 September 2018
Episode 51
Anshuman plans to ask Paakhi out on a vacation as per Tanya’s challenge. Meanwhile, Girish is reluctant to sign the divorce papers. Will Tanya’s plan work on Paakhi, who is busy making sweets and flying kites to impress Ayaan?

Episode 52
Ayaan is upset when Anshuman asks Paakhi about the vacation. He plans a prank to get back at the two. Meanwhile, Tanya criticises Paakhi in front of Anshuman for asking him to plan a trip to Hong Kong.

After Girish’s refusal to sign the divorce papers, Lavanya decides to make him realise she doesn’t love him anymore. Meanwhile, Paakhi tries to convince Ayaan against going to the boarding school.

Even as Ayaan gets angry at Paakhi for her strict treatment, he starts to doubt his decision to go to boarding school. Unaware of Paakhi’s secret plan, Anshuman thinks she is ill-treating Ayaan.

Anshuman plans to get secretly engaged to Tanya, who asks him to be patient. Meanwhile, Lavanya decides to take revenge on Girish. As Anshuman decides to go ahead with his plan, Paakhi ends up arriving at the venue before the engagement.

Suspecting that Ayaan is faking an injury to deceive Anshuman, Tanya decides to send him to boarding school and separate him from his father. She asks Anshuman and Paakhi to go to a charity event in order to get time alone with Ayaan.

Anshuman is livid when he learns about Ayaan’s fake injury. But his anger is short-lived as Ayaan soon suffers a real head injury. Meanwhile, Tania’s effort to send Ayaan away are interrupted by Paakhi.

Anshuman continues to make up stories to hide the truth about the engagement from Paakhi. Meanwhile, Girish continues his efforts to avoid a divorce. On the other hand, Paakhi has only a day left to make Ayaan accept her as a mother.

No teasers available - we'll update once they are.

Premiere episodes of Forever Yours air on Star Life at 18h00 and 18h30 from Mondays to Saturdays.

Teen Depression: Essential Signs & Ho…
Why I Chose to Be Vaccinated Against …
First Sounds From Mars Captured By NA…


This post first appeared on The Edge Search, please read the originial post: here
People also like
Teen Depression: Essential Signs & How Parents Can Help
Why I Chose to Be Vaccinated Against COVID-19
First Sounds From Mars Captured By NASA Rover