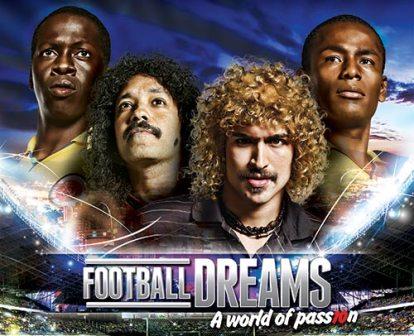 EVA's new 'novela Football Dreams premieres on the channel next Friday, 24 August at 20h00, replacing Under The Storm which ends the day before.

The series is based on the true life experiences of former footballers in the Colombian National Football team, specifically: Carlos Valderrama, Freddy Rincón, René Higuita and Faustino Asprilla.

EVA describes the series having a fictional touch that recreates the true facts, sacrifices, disappointments, happy moments and experiences lived by the players on-and-off the soccer field, which is unknown by fans.

These are the first teasers:

Tuesday 28 August 2018
Episode 3
The Kid (Carlos Valderrama) and Clarisa argue over a newspaper report, where she's quoted saying The Kid asked for a week to answer the Red Devils' offer.

Wednesday 29 August 2018
Episode 4
The Kid, after seeing that his family left the house, goes after his wife to apologise and to assure her they won't argue again.

Thursday 30 August 2018
Episode 5
Maturana decides to visit The Kid at home, after feeling pressured by the press for not having called him.

Friday 31 August 2018
Episode 6
The Kid learns that Clarisa is pregnant with his son minutes before leaving for the Colombian National Team camp. Tino makes a deal with his uncle.

Football Dreams airs on EVA from Mondays to Fridays at 20h00.