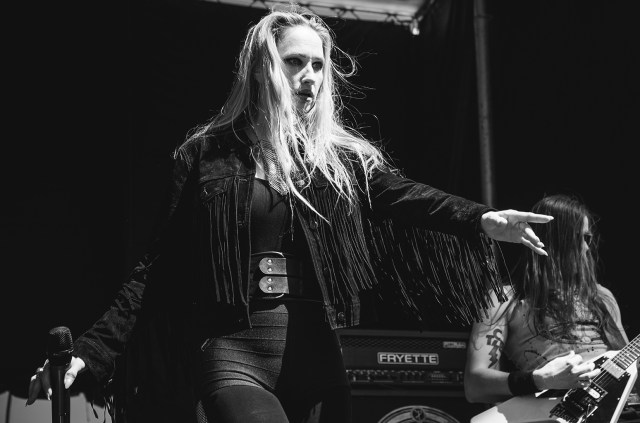 Jill Janus, lead singer of the heavy metal band Huntress, has died at age 43, her family and band said on Thursday.

Janus had long struggled with mental illness and killed herself outside Portland, Oregon, on Tuesday, her relatives and bandmates said in a statement released through publicist Alexandra Greenberg.

“It is with a heavy heart that we announce that Jill Janus- frontwoman for the California heavy metal band Huntress- died on Tuesday, 14 August. A long-time sufferer of mental illness, she took her own life outside of Portland, Oregon. Janus spoke publicly about these challenges in hopes of guiding others to address and overcome their mental illness.

“Janus was a truly special creative involved with numerous musical projects including her role as vocalist for female metal/hard rock cover bands The Starbreakers and Chelsea Girls.

“In addition, Janus was co-composer and creator of an upcoming rock opera with Trans-Siberian Orchestra’s Angus Clark and had a decade-long career as NYC DJ Penelope Tuesday. Her musical career began in childhood.

“Beyond her accomplishments in the music world and her advocacy for mental health issues, she was a beautiful person passionate about her family, animal rescue and the world of natural medicine. She will be missed more than she could have ever known.”

Janus fronted Huntress from the group’s inception in Los Angeles in 2009, singing on three full-length albums and on tours with bands including Motorhead and Lamb of God.

Founding member Blake Meahl said on his Facebook page Thursday that he and Janus “spent 9 years together creating a home, having a family and building our passion project Huntress. The devastation of knowing I will never see her again is the most gutting emotion i have ever experienced.”

“I hope you have found the peace that you couldn’t find on this planet” Meahl added.

The band’s sound was classic thrash-inflected metal, with Janus, one of the few female vocalists in the genre, screaming through songs like Spell Eater, Eight of Swords, and Sorrow with her long blonde hair and tight, black leather stage suits.

She also sang in an all-female metal band known as The Starbreakers on the side.

Janus had been an advocate for mental health and encouraged fans who were suffering to seek help. Her struggles with bi-polar disorder nearly brought an end to the band in 2018, but they returned for another album and more touring.