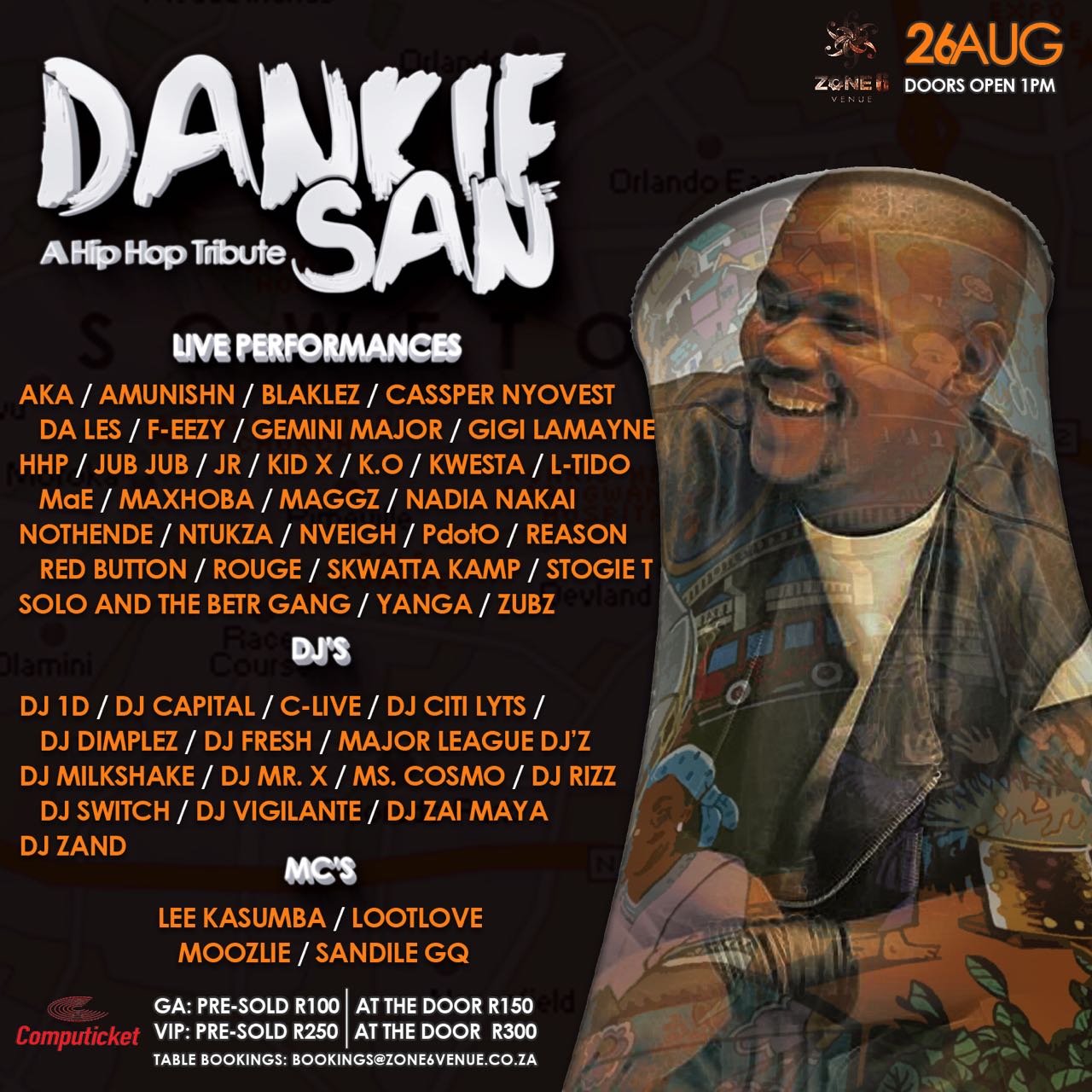 South Africa’s Hip-Hip community presents the Dankie San Concert, a  Hip-Hop Tribute
Johannesburg, South Africa – On the 26th August the South African Hip-Hop community will come together at Zone 6 venue in Diepkloof, Soweto to honour and celebrate the late Linda ‘PRO’ Mkhize in a tribute concert including the best of South Africa’s hip-hop artists and DJ’s.

The line-up will include

Citi Lyts, DJ Fresh, Vigilante, Major League DJs, DJ Dimplez, DJ Capital, DJ Switch, P Kuttah, C-live, DJ 1D, DJ Milkshake, Ms Cosmo, P-Kuttah, DJ Mr X, DJ ZanD , DJ Rizz and DJ Zai Maya.
The event will be hosted by MC’s Moozlie, Lee Kasumba, Lootlove and Sandile GQ.
There is a no loftier legacy to collectively pay homage to than that of larger than life, lyrical magician, that number 1 Soweto boy Linda “PRO” Mkhize. The loss of this prolific storyteller has left an entire community of artists broken. Pro’s contribution to the hip-hop culture was so refreshingly new and unprecedented that the void will never be filled, but rather will be lauded with memories of Pro on and off stage.
From his debut Heads & Tails all the way to his last album Continua, he never had a single moment of comprising, his honesty and creativity were consistently spellbinding. He was not just an outstanding artist, he was a loving human being with the biggest heart. Smiling, welcoming, dancing, encouraging himself into everyone’s heart who happened to be in his presence.
On the 26th of August, we will celebrate PRO in his glorious entirety.
Every fan of PRO and South African hip-hop as a whole is invited to come to celebrate and pay tribute at the DANKIE SAN Hip Hop Tribute Concert.
The concert will take place from 1pm to 1am at Zone 6 Venue in Diepkloof, Soweto.
Tickets are available from Computicket from R100 for general access and R250 for VIP. All proceeds from the concert will go into an education fund for PRO’s daughter Nonkanyezi.
EVENT:             DANKIE San Hip Hop Tribute Concert
DATE:               Sunday, 26th August
VENUE:            Zone 6, Diepkloof, Soweto
TIME:               1pm – 1am