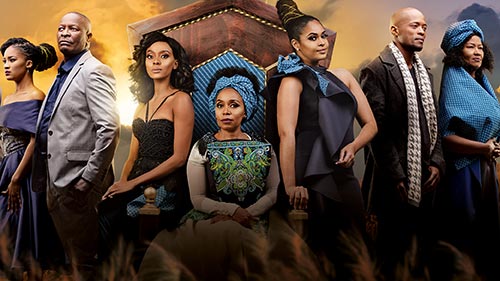 As we mentioned in the first teasers here, The Throne replaces Ring of Lies 2 on Mzansi Magic from Monday, 30 July at 19h00.

Coming up in August:

The villagers celebrate Mosetsana’s return. Dipuo and Moseki come up with a plan to convince the Royal Council. Lerole gives the Queen unwanted advice.

The Queen struggles with the secret of her cancer. Moseki and Dipuo plot to murder The Queen. The Queen fails to tell her children about the cancer.

The Queen offers a R100k reward for information at a Bakwena urgent community meeting.  Themba blackmails Moseki and Dipuo to extort money for his silence.

Detective Puso continues with his investigation, with Sephiri pointing him in a few directions, but when Queen Mosadi discovers this, she's upset.

Moseki and Dipuo are feeling the walls closing in on them. The Queen is finally convinced that her brother is out to kill her.

The Queen comes face to face with one of her assailants and things end badly. Moseki and Dipuo fall out. Mosetsana raises Goitseone’s hopes too high.

Through The Eye of a Needle

An arrest is made after a shooting takes place at the Great House. The family is divided when it comes to holding someone accountable.

Lerole advises the Queen that it’s time she tells her daughters about her health. Queen Mosadi almost finds Goitseone in Mosetsana’s room.

Sephiri lies to the Queen and then makes some inroads with Moseki. Goitseone finally declares his love, and then gets hurt.

A Shot in the Foot!

Kefilwe confronts her mother about forgetting about the Super 8 deal, which escalates to the Queenship succession. Mme Naledi confronts Goitseone with a sjambok.

Sephiri keeps a close eye on Mosetsana and Goitseone through Boipelo. Goitseone ends up in big trouble for talking to the Princess.

Dipuo reveals to Moseki in the ambulance why she faked her collapse. Mme Naledi begs Moseki to make her son’s case disappear.

The Queen is Stuck Again

There is another attempt on the Queen’s life. Tumelo’s dirty secret is revealed.

Dipuo finds a way to keep Mme Naledi quiet. Sephiri gets the girls to fight to keep their mother alive. Moseki is about to put himself as the stand-in when Odirile interrupts.

Odirile reveals her true intentions, she’s back for the Throne. Kefilwe addresses the villagers, but things get out of control and she’s forced to flee.

The Queen’s condition hasn’t changed and Odirile and Moseki plot separately in hopes that they will be voted regent of the throne.

The Queen is dying and her children are desperately trying to find the miracle plant that might save her life.

The Throne airs on Mzansi Magic from Mondays to Thursdays at 19h00.