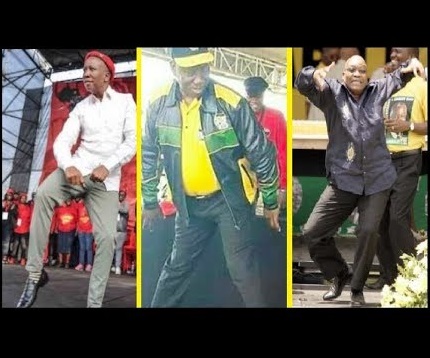 According to Wikipedia, Julius Sello Malema

Julius Sello Malema (born 3 March 1981) is a Member of Parliament and the leader of the Economic Freedom Fighters, a far-left and racial nationalist South African political party, which he founded in July 2013. He previously served as President of the African National Congress Youth League from 2008 to 2012. Malema was a member of the ANC until his expulsion from the party in April 2012. He occupies a notably controversial position in South African public and political life, having risen to prominence with his support for ANC president, and later President of South Africa, Jacob Zuma. He was described by both Zuma and the Premier of Limpopo Province as the "future leader" of South Africa. Less favourable portraits paint him as a "reckless populist" with the potential to destabilise South Africa and to spark racial conflict.

According to Wikipedia, Jacob Gedleyihlekisa Zuma

Jacob Gedleyihlekisa Zuma born 12 April 1942 is a South African politician who served as the fourth President of South Africa from the 2009 general election until his resignation on 14 February 2018. Zuma is also referred to by his initials JZ and his clan name Msholozi.
Zuma served as Deputy President of South Africa from 1999 to 2005, but was dismissed by President Thabo Mbeki in 2005 after Zuma's financial adviser, Schabir Shaik, was convicted of soliciting a bribe for Zuma. Zuma was nonetheless elected President of the African National Congress (ANC) on 18 December 2007 after defeating Mbeki at the ANC conference in Polokwane.
On 20 September 2008, Mbeki announced his resignation after being recalled by the ANC's National Executive Committee. The recall came after South African High Court Judge Christopher Nicholson ruled Mbeki had improperly interfered with the operations of the National Prosecuting Authority (NPA), including the prosecution of Jacob Zuma for corruption

According to Wikipedia, Matamela Cyril Ramaphosa

Matamela Cyril Ramaphosa (born 17 November 1952) is a South African politician and, since 15 February 2018, the fifth and current President of South Africa. He followed the resignation of Jacob Zuma, having taken office following a vote of the National Assembly on 15 February 2018.

Previously an anti-apartheid activist, trade union leader, and businessman, he served as the Deputy President of South Africa from 2014 to 2018. He was elected President of the African National Congress (ANC) at the ANC National Conference in Nasrec, South of Johannesburg in December 2017. He is also the former Chairman of the National Planning Commission, which is responsible for strategic planning for the future of the country, with the goal of rallying South Africa "around a common set of objectives and priorities to drive development over the longer term"