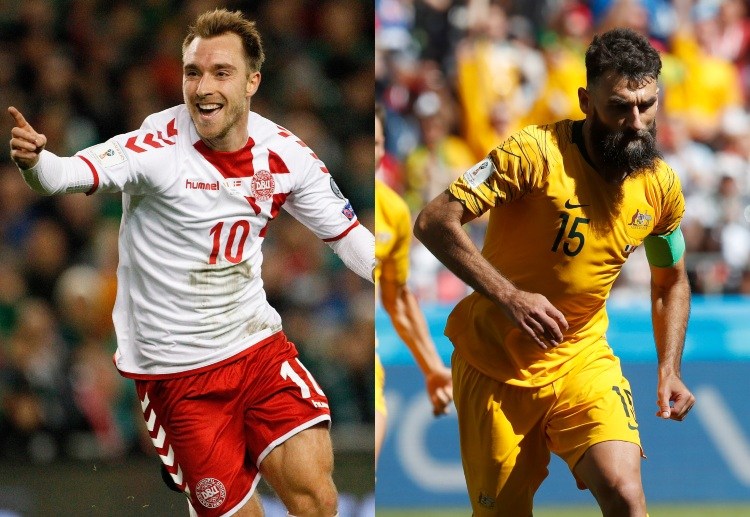 Denmark's Jonas Knudsen flew home to see his little child girl quickly after Saturday's World Cup prevail upon Peru, however, came back to the squad on Tuesday and is in conflict to confront Australia.

Lasse Schone could supplant William Kvist, who was taken off on a stretcher amid Denmark's opener, however, the midfielder stays confident of returning before the finish of the gathering stages.

Denmark began their World Cup campaign with a hard-fought victory against a Peru side making their first appearance in the competition since 1982.
Peru had earlier missed a penalty which was given by the video assistant referee for a foul by Yussuf Poulsen but the offender then gave Denmark a slim lead in the second half.
It took Denmark 27 minutes to have their first shot on goal in Saransk and they were forced to defend for large periods of the game but will still fancy their chances against an Australian side who have only made it out of the group stages on one occasion at the World Cup (2006).
Following the shock resignation of coach Ange Postecoglou in November, Van Marwijk has had limited time to prepare his Australia squad but they produced a good performance against one of the tournament favourites France.
Australia are aiming to emulate their achievements in 2006, but got off on the wrong foot with a late 2-1 defeat in Kazan.

Denmark coach Age Hareide: “Australia are a bit different to us. We have a few players who are at a higher level than them if you look at the squads player by player. But it’s going to be a tight game.
“If you look at the results during this tournament then it would appear that many of the favourites have a tough time dealing with that role. If you go back two years and look at the Matches there, then that was the case there as well.
“They leave all the pressure on the favourites because they can play free without pressure. And when a wall of 10 men is waiting for you in the box, then they can become very tough to break down.”
Australia midfielder Aaron Mooy: “We have a gameplan, which we’ve played since Bert Van Marwijk and the coaching staff took over and not a lot is changing. We just try and do our jobs better.
“The gameplan worked well against France, maybe we need to attack a bit more but that depends how the game’s going. We need to win so hopefully we’ll get a few chances and put them away.” “Every game at the World Cup is like a final.”
On Denmark’s Christian Eriksen: “He’s an excellent player, he’s had a great season and he’s probably Denmark’s most dangerous player. We have to keep a close eye on him, and try and stop the supply to him. We have to do it altogether as a team.”