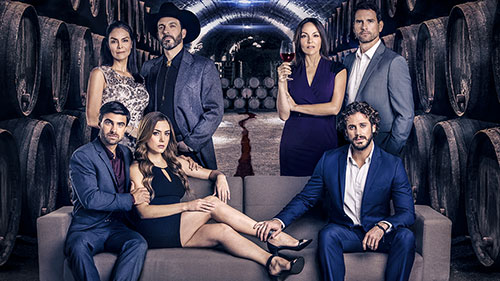 Telemundo's new novella Blood & Wine premieres on the channel today (Monday, 7 May) at 17h00, with new episodes airing each weekday.

Coming up in the first episodes:

Monday 7 May 2018
The Montiel and Castañeda families meet as usual to begin the harvest. Emilio and Juan José buy a van to fulfil their dream of travelling to Ushuaia.
Tuesday 8 May 2018
At Emiliano’s funeral, Crisanto makes it clear that the friendship between the two families has been damaged forever. Juanjo is put in jail.
Wednesday 9 May 2018
Mercedes confronts Crisanto for firing Paloma and Aurora. Natalia tells Paco that all her problems are because of Juanjo.
Thursday 10 May 2018
Juanjo gets into a fight in jail. Aurora goes to Roberto’s beach apartment with Serena, who tells her to forget about Juanjo.
Friday 11 May 2018
Paloma and Jordán start working in Epifanio’s restaurant. Roberto tells Aurora that he loves her, and tries to kiss her.
Monday 14 May 2018
Smith tortures Juanjo to try to force him to say where he is hiding the drugs and money. Roberto hires Aurora in Matías’s project.
Tuesday 15 May 2018
Juanjo is shocked to see Aurora pregnant and holding hands with Roberto. Crisanto and Mercedes are upset to learn that Juanjo is free.
Wednesday 16 May 2018
Aurora gives birth to her baby prematurely. Roberto arrives at the hospital only after his son has been born, having been arrested.
Thursday 17 May 2018
Crisanto offers Roberto a job, but Roberto asks to be a member of the winery. Paloma confronts Roberto when she sees him checking Aurora’s phone.
Friday 18 May 2018
Roberto begins to criticize everything at the Castaño Winery and tries to meddle in the accounting, but Crisanto doesn’t allow it.
Monday 21 May 2018
A small fire in the warehouse ruins the accounting books. Serena and Juanjo study together, and Aurora feels jealous.
Tuesday 22 May 2018
Horacio invites Aurora to give a conference in Los Angeles, but Roberto sabotages the trip. Crisanto asks Ramón Carmona to follow Kimberly.
Wednesday 23 May 2018
Juanjo is attacked by three hooded men and left badly wounded. Goyo takes him to hospital. Aurora suspects that Roberto is to blame.
Thursday 24 May 2018
Crisanto and Dimas are detained but later freed due to lack of evidence. Aurora goes to see Juanjo at the hospital with Serena.
Friday 25 May 2018
Aurora asks Roberto to seek help with his jealousy or their marriage will end. Juanjo receives an anonymous telephone threat.
Monday 28 May 2018
Juanjo takes shooting practice to protect himself from his anonymous enemy. Cándido sees that two of Iván’s men are working as waiters at the event.
Tuesday 29 May 2018
Joaquín is found unconscious and taken to the hospital. Candido is full of remorse. Everyone is worried about Juanjo’s disappearance.
Wednesday 30 May 2018
Juanjo and Iván are face to face, each aiming a gun at the other when the police turn up. Joaquín asks Crisanto to adjust the price of their grapes.
Thursday 31 May 2018
Aurora is shocked to see Juanjo and Serena kissing, and feeling overwhelmed, decides to accept Roberto’s proposal to move to Calistoga.

Premiere episodes of Blood & Wine air on Telemundo from Mondays to Fridays at 17h00. The omnibus airs on Saturdays and Sundays at 14h30.

Friday 1 June 2018
Roberto spies on Aurora’s phone, and prevents her from going to Pete’s Bar. Juanjo discovers that Crisanto buys grapes from Mexicans.
Monday 4 June 2018
Serena, now without a job or a home, accepts Juanjo’s proposal to build a house and live together. Crisanto returns the grapes to the Mexicans.
Tuesday 5 June 2018
Aurora finds herself locked in her own house in Calistoga. Roberto manipulates Sara and uses her to spy on Aurora.
Wednesday 6 June 2018
Aurora and Juanjo meet at the Chicago hotel, while Paloma breaks up with Jordan. Crisanto has no choice but to buy the grapes from Natalia.
Thursday 7 June 2018
Aurora feels scared of Roberto, and doesn’t accept his apology. Paco buys a camera for Paloma and names her the official photographer for the project.
Friday 8 June 2018
Juanjo realises that Fernando has been physically abused, and offers to help him. Roberto secretly records Aurora’s therapy session.
Monday 11 June 2018
Juanjo manages to escape from Edgar’s guards, but Fernando is wounded. Paloma discovers Roberto’s gun and Aurora demands that he return it.
Tuesday 12 June 2018
Roberto places cameras around the house to spy on Aurora. Juanjo seeks help to finish that harvest, while Crisanto prepares Emilio’s wine launch.
Wednesday 13 June 2018
Aurora comes home drunk late at night, and Roberto is furious. Wilmer leaves prison and retrieves Natalia’s laptop.
Thursday 14 June 2018
Aurora and Juanjo are trapped in a lift at the hotel. The Bodega Montiel loses a large amount of wine after an earthquake.
Friday 15 June 2018
Aurora’s therapist advises her to report Roberto to the police. Meanwhile, Crisanto asks the Bodega Montiel to store his wines.
Monday 18 June 2018
Aurora decides not to report Roberto. Leonardo and Paloma discover that there are bottles missing from the wine shop, and inform Crisanto.
Tuesday 19 June 2018
Serena and Juanjo visit Aurora, worried about her situation with Roberto, but Aurora denies everything. Roberto harasses Dolores in his office.
Wednesday 20 June 2018
Aurora tells Serena that she no longer loves Roberto. Natalia tells Luis that they’re going to replace 5,000 litres of Crisanto’s wine with their own.
Thursday 21 June 2018
Roberto receives an email containing a video of him cutting the brake lines on Juanjo’s truck. Aurora goes to Juanjo’s house and they cook together.
Friday 22 June 2018
Crisanto demands that Juanjo leaves Aurora alone. Aurora arrives at her parents’ house and finds Roberto lying in the doorway with a head wound.
Monday 25 June 2018
Crisanto tastes his wine and suspects that there is something wrong with it. Wilmer takes the money that Roberto left at Emilio’s grave.
Tuesday 26 June 2018
Roberto meets with a real estate broker to sell his apartment at the beach. Joaquín is worried about Juanjo and goes looking for him.
Wednesday 27 June 2018
Serena goes to see Juanjo, and they reconcile. Roberto tortures Wilmer to try and force him to say where the money and the tablet are.
Thursday 28 June 2018
At the Montiel winery, a meeting is held to debate the presidency, and they carry out a vote. Roberto disposes of Wilmer’s body.
Friday 29 June 2018
Aurora sends a message to Juanjo to let him know that Dimas is in hospital. Crisanto blames Aurora for the gas leak.

Premiere episodes of Blood & Wine air on Telemundo from Mondays to Fridays at 17h00. The omnibus airs on Saturdays and Sundays at 14h30.


This post first appeared on The Edge Search, please read the originial post: here
People also like
Belle & June – Best Selling Elyria Marble Vanity Tray Set
Cuomo’s got millions to run again. But he may be too toxic to build a team.