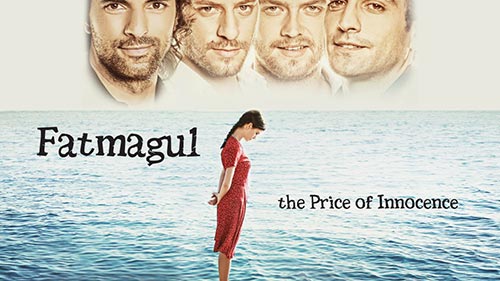 Coming up on Fatmagul this April 2018:

Monday 2 April 2018
Episode 21
Mustafa and Fatmagul meet for the first time since they met in front of their burning house but now they talk about Fatmagul's marriage in front of her house. Fatmagul faces her past and Mustafa meets the new Fatmagul.

When Fatmagul gets rid of her last memory from her past, Kerim starts to have hope about their relationship. Now he is more courageous to share his feelings with Fatmagul.

Wednesday 4 April 2018
Episode 23
Fatmagul starts to work and is very excited - her first guest is Kerim. Kerim sees that Fatmagul wears her wedding ring and she won't take it off anymore.

Mukaddes deals with old issues again. Mukkades meets with her first love Salih and this meeting will be breaking point for Mukaddes.

Mukaddes leaves home by taking her child with and this situation drags Rahmi down. Kerim supports Fatmagul with regards to her helpless situation against her brother. Mukaddes goes to Salih with her son Murat. Salih's dad witnesses their conversation, which is a big opportunity for Mukaddes.

Fatmagul is angry with Kerim after he confesses his love for her. Kerim loses hope after Fatmagul's response to him.

After Kerim's confession, Fatmagul is excited to trust someone again. Fatmagul wants to give Kerim one more chance even after she sees him meeting with Vural.

There will be a first mutual decision for Kerim and Fatmagul and it will also be the first family dinner together. This dinner is also important for Fatmagul's healing process. But those who are at the table don't have any idea of what Fatmagul lived through that day....

In order to prove his love to Fatmagul, Kerim confesses everything about the crime to the police and this becomes the beginning of a new difficult period.

In order to start the legal process, Fatmagul has to complain about what happened. Ebe Nine starts to find a lawyer and tries to find Kadir who is advised by Kerim's master at the town....

Friday 13 April 2018
Episode 30
YaÅŸarans can't prevent the police taking Selim and ErdoÄŸan to confess at Äzmir. On the other hand, Fatmagul and Kerim face lies and threats for the first time after the investigation.

While Kerim is worrying about how he would be affected with this case, Fatmagul tries to handle her fears about the case. When their hopes for his case decrease slowly, lawyer Kadir stands by their side. And There is no exit for YaÅŸarans to hide the absence of Selim to Meltem from her family.....

Mustafa's deposition at court, which is the only way out for Yasaran family, becomes more important.

Fatmagul and Kerim are getting closer to each other to protect themselves from Mustafa's cruelty. However, their relationship arouses Mustafa's anger.

The farewell gathering organised by Kristen is a turning point in the relationship between Fatmagul and Kerim. However the night is going to be ruined by Kristen too.

Kerim and others are in shock after they read the letter. Everybody is suspicious of Mukaddes. In order to protect herself, she discloses the secret that Fatmagul and Granny have already read the letter. Kerim is disappointed as well.

Flowers sent to Gul's Kitchen on the opening day disconcerts the whole family. Kerim wants to call Mustafa to account for the flowers. The only person who enjoys the situation is Munir.

Mustafa's visit to Gul's Kitchen proves that Fatmagul is wrong about Mustafa. Having known that Kerim is away for a while is a chance for Mustafa to disturb Fatmagul.

Kerim follows Fatmagul as he thinks she is going to meet Mustafa. Mukaddes finds out she is really pregnant and has to make an important decision before she enters a new stage of her life.

Wednesday 25 April 2018
Episode 38
Kerim buys a wedding dress as a birthday gift. The wedding dress opens Fatmagul's old wounds. Having realised his mistake, Kerim is disappointed but Fatmagul's attitude towards Kerim means she loves him. Granny finds out about Murat's visit to the school in order to see Mukaddes.

After months in the court room, Fatmagul faces her enemies and for the first time she is strong enough to ask them for an account of what they have done. The sun is still hiding behind the shadows.ErdoÄŸan, Selim and Vural are released till the next court date.

Kerim's arrest while innocent starts a new period in his and Fatmagul's life. As Kerim hopelessly awaits his court day in prison, the only person he wants to prove his innocence to is Fatmagul. Having left Fatmagul alone against Mustafa and YaÅŸarans is the worst thing for Kerim.

Fatmagul's visit is a breath of fresh air for Kerim. Fatmagul has started to feel Kerim's absence in her life. The short time they spend together in the visitors' room is not enough, but it gives them hope. There is so much to say in so short a time.

Fatmagul airs on eBella from Mondays to Fridays at 21h00. The omnibus airs on Sundays at 16h30.

10 of the best pubs in Wales with out…
Why I Chose to Be Vaccinated Against …
What Is the Worst Credit Score?
SSS tells members, employers, pension…
The Year of the Staycation


This post first appeared on The Edge Search, please read the originial post: here
People also like
10 of the best pubs in Wales with outdoor space
Why I Chose to Be Vaccinated Against COVID-19
What Is the Worst Credit Score?
SSS tells members, employers, pensioners: use online facilities, drop box system as NCR Plus remains on ECQ
The Year of the Staycation