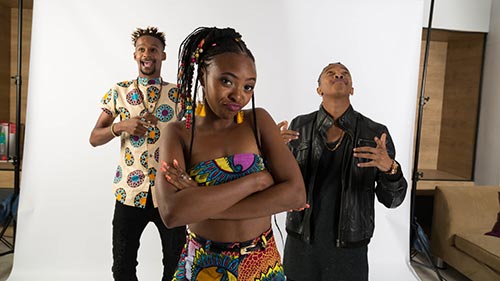 Monday 09 April 2018
Episode 03
We meet a talented young musical trio: Sino, her brother Angel and her sweetheart, Ezekiel. They are struggling to make ends meet while pursuing their dream to make it big.
Monday 16 April 2018
Episode 02
Sino, Angel, along with other children that Mancwane had fostered, mourn the death of their beloved Gogo. Bongi is taking it the hardest but hides behind her phone.
Drama series which follows three aspiring artists from the Eastern Cape Town of Alice, who are lured to Cape Town by businessman and record label owner Leo Black by the promise of breaking into the industry via his label, Platinum Records.

With a tagline that asks "what is the cost of your dreams?", music industry exploitation is at the heart of the series.

The naive youngsters - Sino, Ezekiel and Angel - soon find themselves immersed in a shiny new world, with the promise of glamour, wealth and extravagance.

Of course... as we all know, this cutthroat world is as full of promises as it is lies, and it is soon revealed that Leo Black's intentions are not as savoury as what the group were first led to believe.

Sino sees the move to Cape Town as her last resort for success, with her family back in Alice relying on her for financial support. But when a member of her band strikes a deal with Leo Black, her future - and that of her family - is in jeopardy.

A beautiful, lost queen, gifted but afraid of her full potential. This self-sacrificing young talent has the hopes of her family riding on her success in the big city.

Sino's boyfriend, Ezee is an imaginative and thoughtful poet with a wealth of ideas. He is hard-working, generous and deeply loyal.

Angel is a charming, small-time hustler with his finger on the pulse. He is impulsive, impressionable and optimistic to a fault. Sino's brother and Ezekiel's best friend.

Leo is a charming and charismatic businessman and record label owner, but all's not what they seem when the group gets to know the 'real' Leo after moving into his Cape Town mansion.

Sino's younger sister Bongi is jealous of Sino's looks and popularity. Bongi wants to be the centre of attention for once, and this is a catalyst for drama.

The orderly matron. Religious and motherly, she is the hardworking single parent who will do anything to see her son Ezekiel succeed.

Sive Matiwane portrays a big friendly giant who's not afraid to throw his weight around. Zola hopes to ultimately be a lawyer and maintain peace among the people he loves.

The show's loudmouth funnyman yearns for female attention. China also desperately wants to go to Asia to fulfil his lifelong dream of becoming a kung-fu fighter.