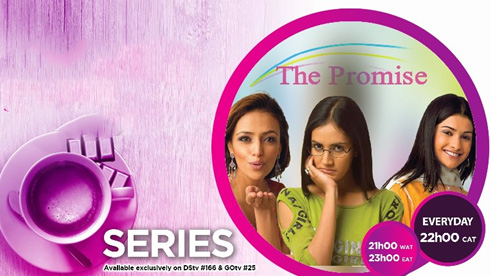 Zee World's new novella The Promise premieres on the channel tonight (Monday, 2 April 2018) at 22h00 and will air seven days a week as per Zee's schedule set-up.

It is the day of the big bid in Dubai and Jai finds himself at a great loss. Pia on other hand is struggling to come to terms with her night with Jai. It looks like Jai has an enemy that wants to take him down.

Tuesday 3 April 2018
Episode 2
Pia attempts to resign from the company since she can't face Jai anymore, but Bani convinces her to stay. It is discovered that Sahil has saved the family from a great loss. Jigyasa uses this opportunity to divide Rashi and Rano.

It turns out that Sahil received help from Jai’s enemy to save the Walia Company. Bani finds a letter to Jai from Pia expressing her love, but she mistakes it as one to Pushkar. Barnali seems to have something against Jigyasa.

Jigyasa is worried about Barnali's intentions and can't seem to keep her focus. Bani shares her true feelings with Jai and that she can never share him with anyone. He is shocked to hear this as he thinks back to his night with Pia.

Barnali enters the Walia house to invite Jai and the family to a party she is hosting, it looks like she is adding fuel to the fire. Bani is suspicious of Barnali and decides to find out about the truth.

Jai finds out that Sahil turned to Barnali for help to save the Walia Company. Barnali is happy to have the upper hand in this situation. What will Jai do?

The sisters attend a friend's wedding. Pia is shattered to see Bani being given attention because of her status as Mrs Walia. Jigyasa rubs in the fact that Piya is not part of the Walia house, making her feel worthless.

Pia decides to leave Mumbai, she will only stay if Jai stops her from leaving. Barnali turns Sahil against Bani. Will her plans succeed?

Jigyasa catches Bani snooping around and searching the storeroom. Anu’s baby is kidnapped and no one has an idea who it could be. Jigyasa has the recording of what happened between Piya and jail. What is up to her sleeve now?

Bani is near to finding the hidden secret and Jai is stuck when questioned about this. Jai is faced with problems from all direction. Piya confronts him, giving him the result of the night they spent together. How will Jai take this?

The secret that the Walias have been hiding for long is creeping back into their lives. Jigyasa, on the other hand, is not helping ease the tension. Instead, she is adding more fire to Rano and Sahil’s problems.

Sahil believes that Bani’s every step is separating the family members. Due to this resentment, he gives Rano an ultimatum to choose between him and Bani.

Rashi manages to convince Ranveer to return to the Walia house. Jigyasa organises a party and suggests that Piya get closer to Jai at the party. Pia accepts her friendship but what is Jigyasa up to now?

Jigyasa receives a letter of threat if she does not tell the family the truth she will die. Barnali confesses to killing Jai’s father, Uday Walia.

Nachiket approaches Jai and proposes amends. Even though he is trying to reach out to him, it seems as though Jai is not willing to hear him out. Piya pulls all strings to bring Jai closer to her.

Jai and the family accept Nachiket, a relationship is mended. Rano is shattered to know that her sisters who used to be close are now set apart by a man.

Sahil is blackmailing his way through to the top of the company, he will not stop at anything. A DVD of Jai and Piya’s night is delivered, how will Bani react to this?

Pushkar is shattered to know Jai and Piya’s secret. Ranveer’s behaviour is changing, he is now showing affection towards Rashi. Bani finds a clue to the truth but once again Rano manages to save Jai from this destruction.

Bani believes that she has mistrusted Jai and her doubts were wrong. Rano approaches Piya and confronts her about her affair with Jai Walia. Rano plans to use her pregnancy to stop Sahil from taunting her.

Pushkar loses all hope to save his marriage. Piya tells Bani that the child she is carrying is not Pushkar’s. Bani then makes it her personal missing to find out who the father of the child is.

Rano forces Pia to leave the Walia house, but to her surprise, Piya agrees with the decision to leave. Preparations for Bani and Jai's wedding anniversary are at the way and everyone is in a celebratory mood.

It is a festive at the Walia house as everyone celebrates Bani and Jai’s anniversary. Piya uses the opportunity to lead Bani into believing that her baby’s father is at the party. Her lie leads to Bani finding out the truth about them.

Bani packs her bags to leave the Walia house. Aunt Billo is not taking Jai’s secret easily, she decides to perform Jai’s last rights. Bani chooses to stay in the Walia house at Aunt Billo's request.

It appears that Piya drugged Jai back in Dubai and Aunt Billo's daughter was witness to this. Bani is still in shock state and is unable to take the news of her husband cheating.

Jai gate crashes the party organised to celebrate Bani leading the company. He declares his divorce to Bani in front of everyone, handing her the divorce letters. It is revealed that Bani is pregnant.

Friday 27 April 2018
Episode 26
Piya finds out about Bani’s condition and feels threatened by this. Sahil, on the other hand, puts Rano in a difficult spot. He pushes her to give up her baby. Bani refuses to let her pain pull her down but faces Jai fearlessly.

Sahil decides to give his and Rano's child a chance at life. Piya is up to her deceitful tricks again. She plots a drama to stop Bani and Jai reigniting their connection.

Rashi doubts Ranveer’s faithfulness. She is then shocked when she finds out that he has been working on saving her life. Bani mistakenly tells Jai about her pregnancy. How will Jai react to this?

Rashi uses her condition to bring Jai and Bani together. Will her plan work? Jai seeks back his place in the family. He, however, receives unexpected outcome.

The Promise airs on Zee World from Mondays to Sundays at 22h00.

Don’t make this Rings of Power market…
Top Things to Do in San Francisco, Ca…
Automatically Post To Social Media Fr…
Man United's American suitors Apollo …
Building a science centre that will i…