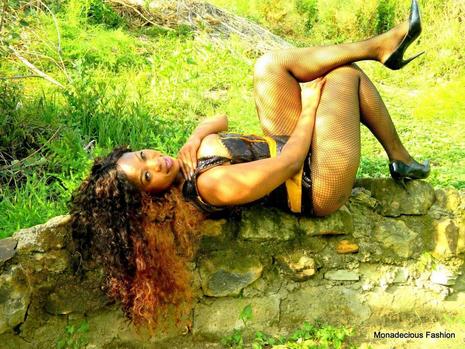 It's been a year since Skolopad, real name Nonhlanhla Qwabe, was introduced to Mzansi.

The controversial entertainer first made headlines in February 2017, when she walked red carpet at Metro FM Awards wearing  "that yellow dress".

Since then, the registered nurse — who hails from Qwa-Qwa in the Free State — has made waves on the local scene and has become infamous for her bold fashion sense and raunchy social media pictures. Remember the boerewors dress she wore to the the 9th annual Feather Awards in November last year?

The latest, being a full nude spread that she has shared with fans on Twitter — the motive for the "morning glory" snaps is still unknown, but Skolopad's manager, Tebogo Mofokeng, was previously quoted saying that she made the promise when she thought that Zuma was going to step down.

Maybe this is her final curtain, if the news reports of President Jacob Zuma being on his way out are anything to go by. Well that, and 50 000 Twitter followers.
Here are some of the responses to the her latest "offering":