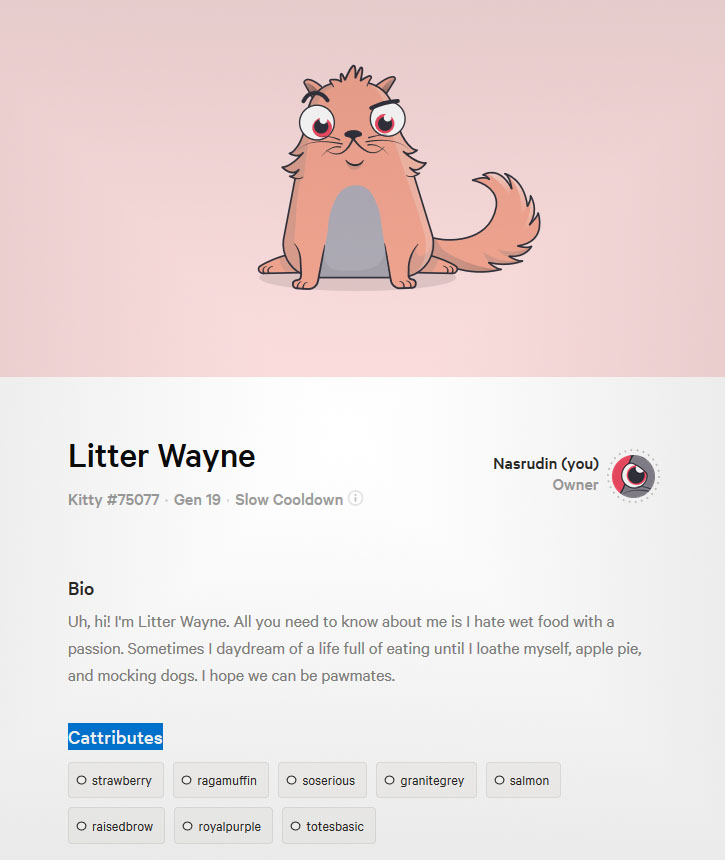 CryptoKitties is a breakout application built on the Ethereum blockchain, and it’s taking over the crypto world.
Crypto users are going crazy for the virtual cat game, which features collectible kittens with a real-world value.

The Potential of Smart Contracts in H…
Why Bitcoin Crashed – Is it Safe to I…
Tribal Credit Raises $34.3 Million to…
5 Tips For Protecting Your Cryptocurr…
A Furry’s Guide to Cryptocurrency
The application bridges the gap between the Ethereum “world computer” and a mainstream audience, thanks to its wide appeal and simple user interface.
If you’re interested in the kitty craze, or in Ethereum, the game and its blockchain mechanics are detailed below.

CryptoKitties lets users purchase collectible kitties with Ethereum, and then breed them to create more kitties.
Each cat has its own genetics which are inherited from its parents and stored in a 256-bit hexadecimal number.
These genes exhibit themselves as “Cattributes”, which define how a cat looks.
Cattributes define colour, expression, body type, and furriness of a CryptoKitty – and players breed kitties to develop rare Cattributes.
Kitties are genderless and can act as either the dad or mom in a breeding pair.
Players can also breed their cats with those of other players, selling the “siring services” of their digital cat for Ethereum.

CryptoKitties has become wildly popular since its launch at the start of December and during peak times it accounts for over 15% of all transactions on the Ethereum blockchain.
Players have spent almost $5 million buying kitties on the platform, with rare cats traded for over $10,000 and the smart contracts that make up the game’s codes flooded with transactions.
This has caused a dramatic slowdown on the Ethereum blockchain, with transactions taking up to 20 minutes to be processed – and minimum transaction fees increasing to around $0.25.
While the success of CryptoKitties is great for consumer Ethereum adoption, the stress it has placed on the blockchain means developers face more pressure to implement a scaling solution.
Raising the miner gas limit can alleviate transaction bottlenecks in the short-term, but long-term scaling for Ethereum will only come from solutions like proof-of-stake or sharding.


This post first appeared on The Edge Search, please read the originial post: here
People also like
The Potential of Smart Contracts in Healthcare
Why Bitcoin Crashed – Is it Safe to Invest In Bitcoin In 2021?
Tribal Credit Raises $34.3 Million to Support SMEs in Emerging Markets
5 Tips For Protecting Your Cryptocurrency Investments
A Furry’s Guide to Cryptocurrency
Banco central proibe transferência via WhatsApp