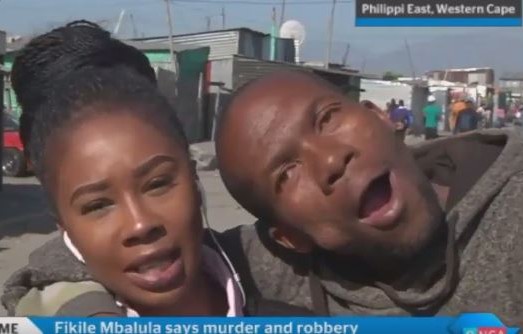 Her live broadcast was interrupted by a passer-by.

Gender activists and other public figures have expressed outrage and condemn what they call men's entitlement to women's bodies.

what a nerve! We have just witness a crime. I can't believe ppl laugh at this
— abner letsele (@abnerletsele) October 24, 2017

how do stay so calm & focused when a stranger out of nowhere hugging you, while on duty?

Horrible,I hope they reported a case so that he learns it's wrong,either this guy is mental or ignorant.I can never touch strangers that way
— Cash (@Caswell_Phasha) October 24, 2017

Others have commended Mtongana for maintaining her composure in a difficult situation.

She loves her job. She dealt with the situation in a very calm manner and most of all continued
— Sir Kay (@iKay_Mo) October 24, 2017

Great journalism, some journos can let a lot from you mama, well done. No fear, No favour
— asandabrown (@number_1_sport) October 24, 2017

Gotta love and understand our people regardless. I love how Athi handled it
— Lunga Felane (@TheeFela) October 24, 2017