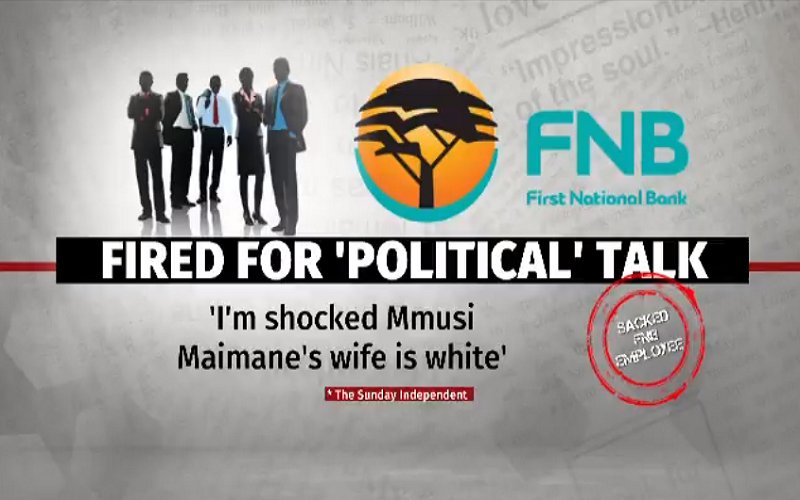 A negative comment about DA leader Mmusi Maimane on WhatsApp is among the many political comments that led to the sacking of four young FNB ANC-supporting employees.
Siphesihle Jele, Simon Masimula, Sipho Coke and Xolani Nkosi, who were employed as premium bankers at FNB in Inanda, Sandton, were fired for “political talk and using insulting language” after the Bank monitored their business e-mails and WhatsApp group conversations for several months last year.

How to Integrate Bitcoin Payments in …
Homebuyers anticipate lockdown exit a…
In one of the e-mails another employee, Linda Mahaye, said: “I’m shocked Mmusi Maimane’s wife is white,” to which Jele responded: “White voice, white party, white wife, very soon he will be a Michael Jackson and bleach his skin.”
In his response to an e-mail from Masimula, Jele wrote: “If we don’t want white people to look down at us, we then should stop the notion that everything white is beautiful.
“Luck or anything good and everything black is associated with ugliness, black sheep, etc, cos (sic) that simply means if you’re almost white then almost beautiful and if you’re darker then you’re far from being beautiful.”
Jele was also accused of inciting fellow employees after he forwarded a WhatsApp message stating: “Leaders, as we wake up even on a Saturday and going to slavery, let us also not forget that a black employee cannot afford to buy a house, cannot afford to buy a car and also cannot afford to provide basic commodities for his/her family. Leaders, it is upon us to fight for equality and to transform that untransformed FNB. Leaders, it is also true that the time is now.”
Another e-mail that landed Jele in hot water was his response to a colleague, Sbusiso Nyembe, in which he wrote: “The imperialists are the ones we should be using our energy and resources cos (sic) they are milking our country and continent and they are not remorseful about that. They brutally ruined our land, killing them, our forefathers, and they are still not remorseful about that. Instead they want us to think they are mentally superior.”
These comments saw Jele and his three colleagues being accused by the bank of “making (a) racially-based and motivated statement which is generalised, which constitutes discriminatory sloganism and which is racist and bigoted in nature”.
They were subsequently slapped with 10 charges including “gross misconduct and breach of your duty of good faith towards the bank”. The four were also accused of causing “an irretrievable breakdown of the trust and working relationships between yourself and the bank, to the extent that the bank and its managers no longer believe that they can exercise confidence in you to exercise your duties as a premier banker or in any other capacity at the bank”.
In response to e-mailed questions on the matter, FNB spokesperson Shamala Moodley said the bank “respects every employee’s constitutional right to privacy and freedom of association”. She confirmed the four employees were dismissed “following a thorough and vigorous internal disciplinary and Commission for Conciliation, Mediation and Arbitration process”.
Moodley said the bank considered the matter closed. However, the employees believed their dismissal was politically motivated.
Jele, 30, said he and his colleagues would still have been employed by FNB if, in their intercepted conversations, they had said something negative about the ANC or President Jacob Zuma.
Jele said his “unfair” dismissal made it virtually impossible for him to find a new job. “Life has become a living nightmare for me. I can’t provide for my three daughters and my family back home in KwaZulu-Natal.
“I paid a heavy price for exercising my constitutionally guaranteed right to freely express myself I doubt we would have been dismissed if we had heaped praise on Mmusi Maimane and the DA.
“Our dismissal was also racially motivated because we had a grievance against a senior white colleague who was victimising us as we were advocates of transformation within the bank,” claimed Jele.
“Clearly, that did not go down well with the bank management, which started, without alerting us, monitoring our e-mails, an act which was a gross violation of our privacy.”
Masimula, 36, also said he was the breadwinner and it would be extremely difficult to take care of his three children and his family.
“I was also taking care of my parents and extended family. Our reputation has been seriously damaged and has made it virtually impossible for us to get new jobs.
“I have been submitting several job applications and haven’t received a single call,” he added.
Masimula called on employers not to punish their staff for freely expressing themselves on issues they felt strongly about.
“What we found strange, once disciplinary processes started, was that our employer started beefing up security.
“How do you unleash armed security guards on young employees who are privately expressing themselves on e-mail and social media?” Masimula asked.
Sunday Independent