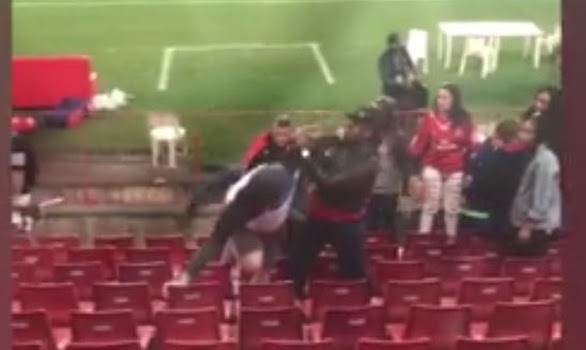 Racial insults‚ drinks and expletives flew as spectators got involved in a scrum after this weekend’s Sharks win over the Golden Lions at Ellis Park.

Sijadu Mzozoyana‚ who witnessed the scuffle‚ said a man had allegedly called a woman a k****r when she did not take kindly to him groping her as rugby fans left the stadium.

“There was an altercation between a white man and a black woman. This gentleman physically grabbed the black lady’s bum. She was upset about it and she slapped him across the face and started screaming at him‚” he said.

Mzozoyana said he then heard the white man say to the woman‚ “shut the f** up you black k****r”.

“He said this more than once. I then walked towards him and asked who is this k****r he was referring to. Before I could get to him‚ a group of white guys came up and stopped me. I didn’t want to throw punches. I wanted to speak to him.

“I wanted to ask what the word meant to him‚ but people started getting in the way‚” said Mzozoyana. “The guy got up and ran away.”


Mzozoyana said he was “agitated” that people had stopped him from getting to the man. “They should have restrained the guy.”

He said he intended reporting the skirmish to stadium management.

“I would like to meet the guy and make him understand the extent of racial tensions that exist in this country because of people like him. If people can openly speak in this manner‚ people can be killed because the people you refer to as k****r are our mothers. It (the word) carries more weight than f**k you‚” said Mzozoyana.

He said if the incident was not dealt with‚ the man would do the same thing to other people.

“Ellis Park Stadium (Pty) Ltd as well as the Lions Rugby company will never condone this type of behaviour and take strong exception to this .… We will do anything possible to get to the bottom of this unacceptable behaviour. We have started an investigation‚” said Erasmus.

Erasmus said that stadium management would examine their CCTV footage


This post first appeared on The Edge Search, please read the originial post: here
People also like
7 Reasons Why You Should Hire A Female Divorce Attorney
How Gender Equity Impacts the Bottom Line
How To Run a Beauty Salon And Not Lose Your Own Beauty
Keeping in Touch – Chapter 1
The Eight Wives of Henry VI society (EWH6)
Music Profile: Jackie's Boy - R&B Artist - Georgia, Usa | SRL Networks London Music PR
Vanity, Vendors, and Vulnerabilities
Sex on Your Period – Reasons to Do It