Buhle Mkhize is said to have been offered a deal she couldn’t resist. 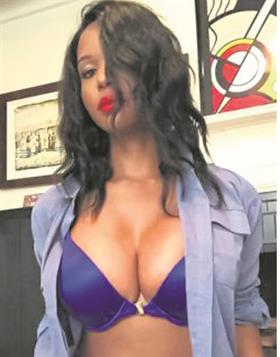 Buhle set Twitter ablaze in May this year when she threatened to release some details of her affair with the minister.

She was reacting to an interview Gigaba’s wife Norma did with news channel eNCA.

According to sources, the socialite has now landed herself a reality show.

Buhle, who is currently based in New York, in the US, will soon start shooting her reality show, our mole says.

The sexy bombshell rose to fame in 2015 when she exposed her alleged affair with the then minister of Home Affairs, Gigaba.

Sources close to the situation told the People’s Paperthat Buhle had been offered a deal she could not resist.

“She was offered a staggering amount of money she could not say no to,” a source claimed.

The source said Buhle will travel the world.

Another source said the reality show will also show the business side of Buhle, who is currently shooting her fitness DVD.

“During the show she will show viewers how she stays in her terrific body shape,” said the source.

Buhle will also show her background, how she grew up and her journey that ended up with her relocating to New York.

“There are many mystery questions around who Buhle is,” said the second source.

Apart from being known for her controversial tweets, Buhle is a celebrity stylist, fashion curator and yoga instructor based in New York.

She was born and raised in Gezinsila in the Eshowe region of KwaZulu-Natal.

Buhle twitted during the week that she loves making stories and sharing her love for music and travel nearly as much as she loves writing.

“I must totally do a reality show or write a book.”

Some of Buhle’s fans pleaded with her to do a reality show.

They even suggested what she should include in the show.


This post first appeared on The Edge Search, please read the originial post: here
People also like
Why Furries Make Excellent Hackers
The Ultimate Guide To Obtain a Europe Residence Permit
How to Get Rid of Ants
MICRO BUSINESSES
Virtual reality tourism ready for takeoff as travellers remain grounded

Buhle Mkhize is said to have been offered a deal she couldn’t resist.