Zuma’s salary vs other world leaders (Excluding 'perks' like Nkandla, Gupta's, cars and security for all his wives) 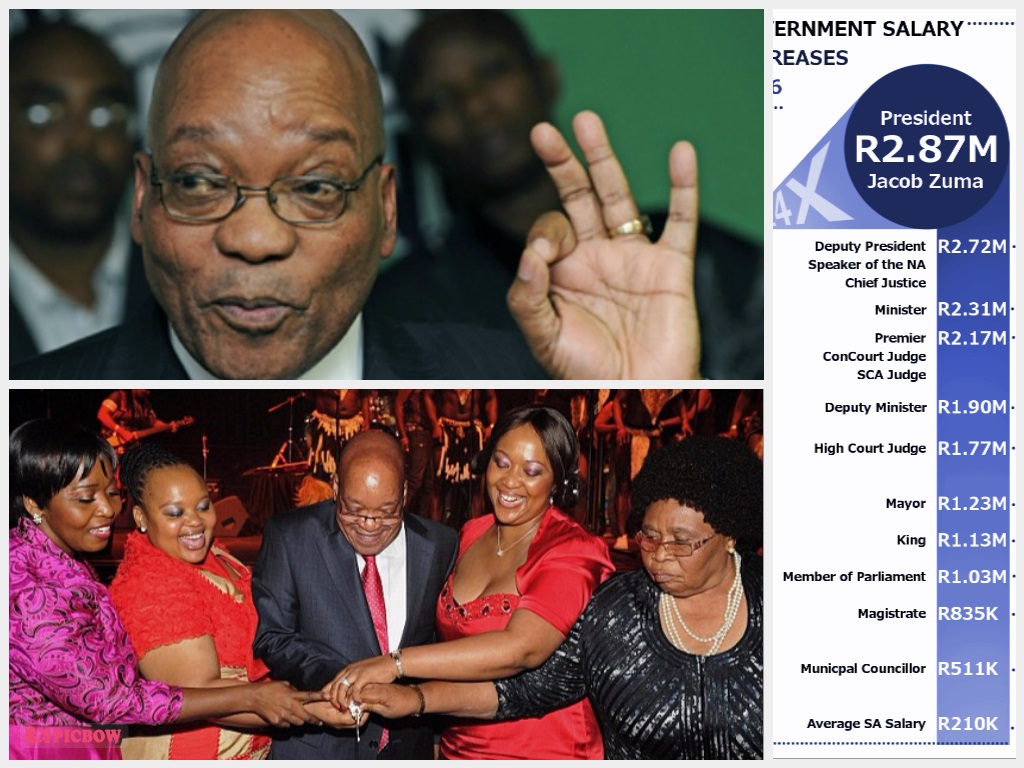 Despite a pay freeze in 2016/17, and an economy in recession, President Jacob Zuma remains one of the highest-paid leaders in the world.

In 2016, Zuma’s Salary was approved at R2.87 million for the year, putting its current dollar value at US$214,780. Later in the year, due to poor economic conditions, the president signed off on a salary freeze for politicians, putting a halt to any adjustment for 2017.

However, even without the typical 5% increase to his annual pay, president Zuma remains among the best-paid leaders in the world – with a truncated paycheque higher than many prime ministers in European countries, and his counterparts in the BRIC nations.

Singaporean prime minister Lee Hsien Loong is widely known to command the highest salary of any politician in the world, and this position has not changed.

In April 2017, Singaporean state media revealed that the latest salary increases in the nation will see the country’s 31 ministers and officials earning S$53 million a year (US$38 million).

The politician has taken several pay cuts over the years, but still earns a reported US$1.6 million annually – far more than any other official leader, despite being down from US$1.7 million in 2016.

Singapore’s president, Toby Tan – whose role is a largely ceremonial one, in the same vein as monarchs in European countries – also earns a significant US$1.1 million salary.

Australia’s PM Malcolm Turnbull, had his salary adjusted upwards to AU$527,852 (US$400,832), at the beginning of July, effectively making him the second-highest paid leader, placing ahead of the president of the United States for the first time.

Also Read: My trusted friend promised me a job and sold me to a human trafficking syndicate

US president Donald Trump draws the same salary as his predecessor, Barack Obama, which is set at US$400,000, but has made good on his campaign promises to donate it to other causes.

Trump has reportedly donated his full first-quarter, pre-tax earnings of US$78,333 to the National Park Service.

Within the BRICS nations, salaries appear far more modest, though the true extent and sources of their wealth – as with our local politicians – is widely questioned.

Russian president Vladimir Putin is said to draw a ‘humble’ salary of US$138,000, while Brazil’s controversial new president, Michel Temer, receives a fraction over US$113,000.

RPA and AI, The Two Strings of the Automation’s Bow

Zuma’s salary vs other world leaders (Excluding 'perks' like Nkandla, Gupta's, cars and security for all his wives)