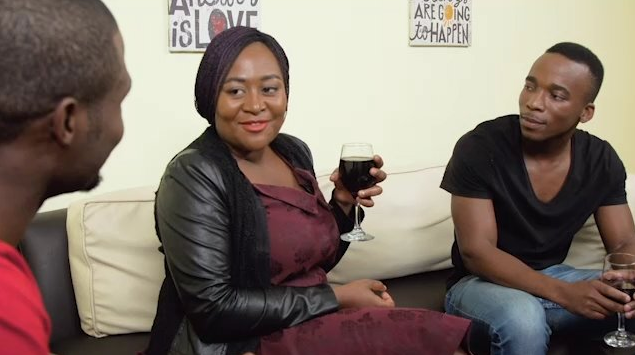 This week’s main Date My Family contestant was 25-year-old chef Mbalenhle Machele from Daveyton who loves her alcohol as much as she loves partying.

Among all the things she wanted in a man, she said he “must have party vibes, not church vibes” in addition to being handsome and a snazzy dresser.

Mbali has a laundry list of must-haves and deal-breakers when it comes to a potential bae. Will any of the suitors measure up? #DMFMzansi pic.twitter.com/odaE2I5tcy
— Mzansi Magic (@Mzansimagic) July 2, 2017

Her first date was with the family of Itumeleng Malela who is a 25 year-old “theatre practitioner.” He didn’t seem too impressed with her the first time he laid eyes on her and neither were his friends.

At one point they even accused her of being a gold-digger to which she replied “do i look like a miner?” They told her she didn’t and she said “then I am not a gold digger.”
Yikes!

Despite that, his friends wanted her to come back at the end but Tumi was NOT having it.

Itumeleng feels very passionately about Mbali NOT coming back for him. Blame it on the alcohol. #DMFMzansi pic.twitter.com/rUKKtcttkG
— Mzansi Magic (@Mzansimagic) July 2, 2017

The second bachelor was a 28-year-old Pretoria based producer named Bernard Sebola who was looking a for a “chocolate colored” woman who doesn’t drink much and is not too tall.

Mbali's issue with the food Bernard's family prepared is not so much the lack of creativity as much as the tepid temperature. #DMFMzansi pic.twitter.com/ONw0gv2j8q
— Mzansi Magic (@Mzansimagic) July 2, 2017

The minute he heard that she loves her alcohol, he was put off and also concluded that she shouldn’t bother coming back.

The final bachelor was Reitumetse Nagoya from Pretoria. The 24-year-old said he used to be a sales exec when he lived in Limpopo but he was very vague about what he does for a living now.
He also didn’t seem to impressed with Mbali at first. His friends described him well though. So well that we found ourselves considering dating him too!

Mbali and her strong personality kept the one-liners coming but we commend Tumi’s friends for keeping up with her. The conversation got a little…er… PG18 towards the end there and if it wasn’t so awkward to watch with family, it would have been entertaining.

It was easy to tell that she would chose the last family based on that evening but she seemed to be disappointed by how young bachelor No. 3 was once she finally laid eyes on him.
That didn’t stop her from blushing at his compliments and perving over his lips which she described as "Kit Kat ice cream"

They seemed to get along but Tumi said he doesn’t see them getting into a relationship (because she seems to love alcohol more than she could ever love anything/anyone else) so that was an epic fail.

That time I thought I was a drinker of wine and Mbali comes along #DMFMzansi pic.twitter.com/TasjqHJPrK
— KALANGA PRINCESS © (@Jordie_WithAn_R) July 2, 2017