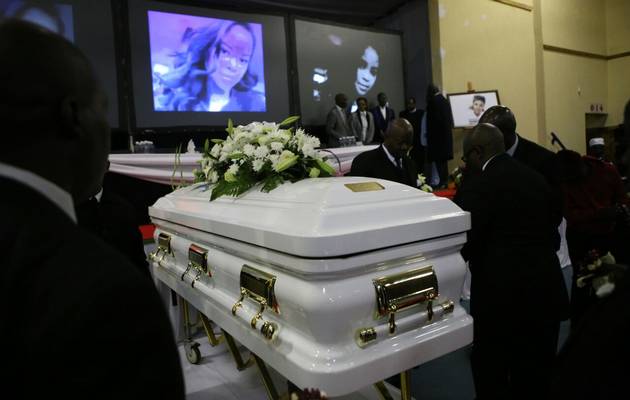 The funeral service of Karabo Mokoena got under way at the Diepkloof Multipurpose Centre in Soweto on Friday morning.

Mourners rose to their feet as Karabo’s white coffin was wheeled into the hall.
Her parents‚ siblings and other relatives walked behind it as a soft gospel tune played in the background.
Among those present at the service were minister for women Susan Shabangu and Gauteng education MEC Panyaza Lesufi.

Karabo The Junkey – I Do I Do
Connie Ferguson shows some Dance move…
Pixel Jam 2017 at University College …
Karabo was found dead on April 29.
Her charred remains were found in a ditch behind a park in Lyndhurst.
Her family‚ however‚ had continued to search for her‚ circulating her picture on social networks for two weeks‚ unaware that she had already died.
Her boyfriend‚ Sandile Mantsoe‚ has been arrested in connection with her murder.
The 27-year-old forex trader has been charged with premeditated murder and defeating the ends of justice.
Mourners were handed pink and white funeral programmes‚ which displayed pictures of the young woman.
According to her obituary‚ Karabo matriculated from The Hill High School.
She began her tertiary education at Regenesys Business School in 2015. She obtained an aviation licence at AAFSA.


This post first appeared on The Edge Search, please read the originial post: here
People also like
Karabo The Junkey – I Do I Do
Connie Ferguson shows some Dance move and Rapping skills
Pixel Jam 2017 at University College London