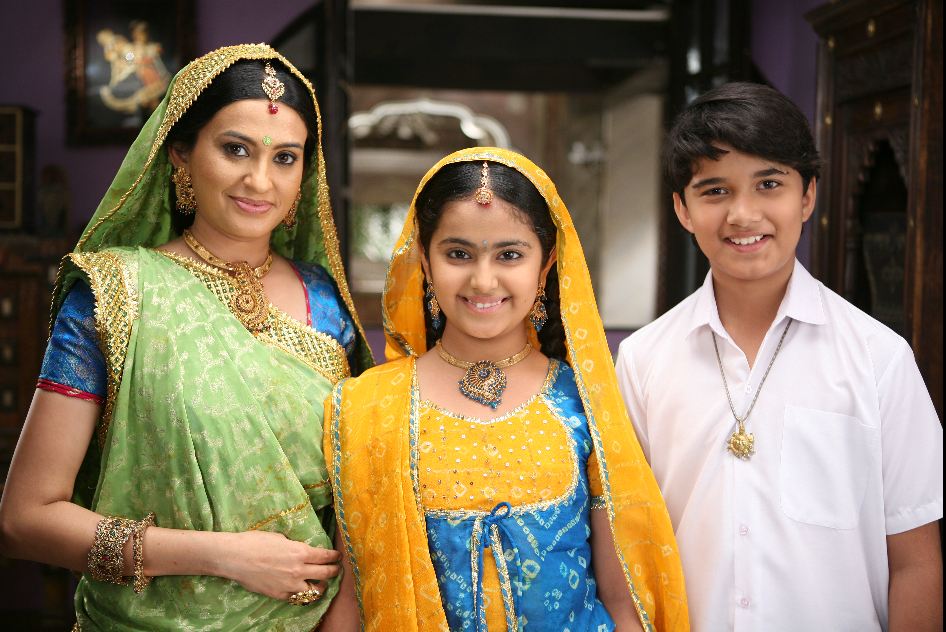 Coming up on Young Love this April 2017:

Anandi is haunted with dreams of the shootout. Meanwhile, Tipri challenges Sumitra to a cook off to win the family over.

Tipri causes Bhairon to think that she is his wife leading him to hold her affectionately. Meanwhile, Jagdish stands up for his wife.

Tipri continues her nightly roaming in the house. Meanwhile, Anandi has a hard time remembering who Grandma Kalyani is.

Tipri uses Anandi’s condition to her advantage when she plans her actions moving forward to get Sumitra out of Bhairon’s life.

Tipri has a moment of panic when she thinks that Anandi may have told Grandma Kalyani the truth. Meanwhile, Shyam tries to get Anandi to recall the incident that occurred.

Tipri manages to make Grandma Kalyani worry about Anandi and Jagdish’s marriage and their future together.

The saints arrive at Grandma Kalyani’s home for a lunch treat from the family but it seems as though a malicious mind is about to change everything.

Tipri has a dramatic emotional breakdown to get Gehna and Sumitra into Grandma Kalyani’s bad books. Meanwhile, Jagdish and Phooli get teased for Anandi’s condition.

Khajaan and Bhagwati get into an argument when Nihal comes to their home with some alcohol. Meanwhile, Sumitra tries her best to keep the peace in her home.

Tipri manages to create some drama and chaos between Bhasant and Gehna. Meanwhile, Tipri gets highly upset when Bhairon goes to his wife for assistance with regard to the drama in the home.

Bhagwati is convinced that Nihal has bad intentions with regard to her husband. Meanwhile, Bhasant gets highly offended by Bhairon when he tries to stop an argument.

Shyam gets deeply hurt when he realizes that Sugna is still in love with her late ex-husband. Will he be able to control his emotions?

Bhasant and Grandma Kalyani make peace, but both turn against Bhairon for trying to get rid of the tension in the home.

Shyam is haunted by the fact that Sugna is still in love with Pratap, whilst he cannot seem to get Sugna off his mind at all. Will he find a way to make her fall for him?

Bhasant and his family visit Sugna and her in-laws. Will everything go as planned?

Jagdish and Anandi come across a young girl who calls Tipri her mother. Meanwhile, Bhagwati has a tough time dealing with her husband’s new attitude.

Khajaan Singh uses his new home as an opportunity to prove his new status and power to Grandma Kalyani and her family.

Nihal misbehaves with Bhagwati and then with Sugna, but it seems as though Khajaan gives this a blind eye. Meanwhile, it’s about to go down when Grandma Kalyani has had enough.

Everyone starts to celebrate when they find out that Sugna is pregnant. Bhairon is worried that the pregnancy may be dangerous for Sugna and her child.

Sugna feels disappointed that everyone has turned their attention away from her son. Meanwhile, Anandi is about to cause a fire in the kitchen.

Grandma Kalyani wants to get Jagdish married to a new wife. How will he feel about this?

Grandma Kalyani and Teepri visit Bhanwari to have a look at the new wife choices for Jagdish.

Jagdish assures Grandma Kalyani that Anandi is the best wife. Meanwhile, Gehna is worried about her husband.

Everyone gets ready for Jagdish and Anandi’s wedding anniversary. Will Bhairon invite her parents?

Grandma Kalyani wants to get Jagdish married on the day of his wedding anniversary with Anandi.

Grandma Kalyani lies to the family to get Jagdish away from the home.

Grandma Kalyani gets violent and threatens Jagdish when he refuses to marry the new girl.

Khajaan Singh is ready to tell Anandi and her in-laws the truth when he arrives at Grandma Kalyani’s home. How will they handle the situation?

Bhairon tries his best to find out the truth but it seems as though he could arrive too late to stop the wedding from happening. Will Tipri use this to her advantage?

Grandma Kalyani tries to explain herself to everyone. Meanwhile, Khajaan Singh threatens Maasa.

Anandi worries about where she will go when it’s time to go home. Meanwhile, Sumitra loses control of her emotions and blames Grandma Kalyani for playing with 3 innocent lives.

The council has arrived and is ready to come to the final verdict.

Anandi is questioned in order to prove her mental state of mind. Will she be able to pass and humiliate Grandma Kalyani in public?


Premiere episodes of Young Love air on Glow TV from Mondays to Fridays at 18h00.


Please note: we can't guarantee that these will be available from Glow TV each month but we'll definitely publish them if they are.

Set in rural Rajasthan, ‘Young Love’ traces the arduous journey of child bride from the brink of childhood to womanhood. Married at the tender age of eight, she has to accept and accustom herself to a new family of strangers and accept her roles as a friend, lover, wife and a daughter in law during childhood itself. Now, as a young adult, she faces new challenges as she tries to carve out her own identity in the world.

‘Young Love’ very sensitively portrays the plight of children who are unwittingly forced into marriage, in the name of tradition, and have to bear the repercussions for the rest of their lives. The dominance of the elders in her new home – the expectation of a child to take on the responsibilities of a woman. The harsh treatment meted out by the in-laws for any infraction and the complete lack of any outside support is both painful and shocking to viewers as this is the reality in rural India even today.

However as time passes they show this very child bride to become a strong independent woman with the support and unwavering love of these very in-laws.The series has gone on to focus on several women’s issues that need to be addressed and reformed. Most importantly the storyline emphasises the importance of respecting women and empowering them in every way in order to lead full lives and contribute to society at large.
\
Be sure to tune into YOUNG LOVE at Mon-Fri 19:30 every Monday to Friday on DStv 167, OVHD 108, StarSat 570