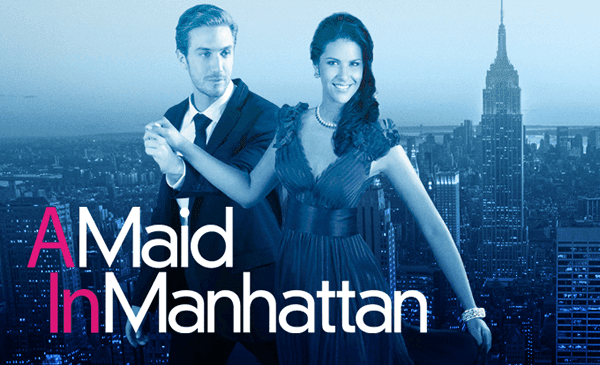 Coming up on Maid in Manhattan this March 2017:

The repercussions of what happened at the Queens event continue to affect all concerned.

Marcela notices a change in Calixta’s behaviour. Sara takes a photograph of Thompson after their encounter so she can blackmail him later.

Sara manages to make her way into Cristobal’s hotel suite. Things don’t go according to plan when Hugo takes matters into his own hands.

Sara convinces the doctors to tell everyone that she is dying. Derek confronts Hugo for changing the bullets.

Marisa is convinced that Sara saved her life by taking a bullet meant for her, and Sara uses this opportunity to toy with her.

Richard tries to borrow money from Tyron after Calixta comes up with the perfect plan to ensnare Estanislao and Lazcano.

Yaya suspects that Sara is behind the assassination attempt, but when Marisa explains this to Cristobal, he refuses to believe her.

Cristobal is convinced that Marisa is accusing Sara of being behind the attempt on their lives because she is jealous of her.

Marisa and Cristobal continue to argue about Sara. Tyron agrees to give Calixta the money she needs.

Cristobal finds himself distracted by the issues with Marisa. Sara and Catalina finally meet in court at the hearing.

Sara ensures that Catalina is sent to prison, and Marisa finds herself in grave danger when she has an unexpected encounter with Hugo.

As Cristobal continues to argue with Marisa, Sara steps in to fuel his jealousy by telling him about Frank’s advances.

Sara takes advantage of Cristobal’s depression, while a terrified Belinda tries to convince Goyo not to leave the house.

Carmen tries to convince Marisa not to let Sara take Cristobal away from her, but Marisa begins to spend more time with Frank.

Marisa tells Frank the story of how she met Cristobal, while Goya and Belinda find themselves in terrible danger when Hugo breaks into their house.

Leticia tries to find out who Rolando really is, but he evades her questions. Sara asks Derek to continue Hugo’s assignment.

Cristobal attempts to smooth things out with Marisa but still refuses to talk about Sara. Hugo’s death leads to many questions.

Tania discovers Sara and Cristobal’s secret. Rolando finally gives in and tells Leticia everything she wants to know.

Marisa discovers that Cristobal kissed Sara and refuses to speak to him. Lalo’s doctor has some terrible news.

As Marisa tries to deal with the doctor’s news, Derek tells Estanislao the truth about the attempt on Cristobal’s life.

Marisa tells Cristobal that she knows about what happened with Sara and wants to end her relationship with him. Sara gives Cristobal an ultimatum.

Cristobal refuses Sara’s advances and explains that Marisa is the only woman for him. Sara offers to give Marisa the money she needs for Lalo.

Belinda asks Goyo to give her time to get over Hugo. Marisa is upset when she finds Victor with another woman.

Victor expects Cristobal to offer him his job back, but instead gets the offer of a place in rehab. Yaya asks Marcela about Lalo.

Cristobal is rebuffed by Frank when he asks after Marisa and Lalo. Calixta eavesdrops on Sara and Estanislao as they plan a meeting.

Sara and Estanislao plot to get rid of Marisa. Bruno gets hold of Lalo’s test results. Tyron hears about the operation Lalo needs.

Sara tries to get Victor drunk in order to obtain the hotel security codes from him, but will she get him too drunk for him to remember them?

Tito tries to persuade Cristobal that Marisa needs his love and support more than his money. The police question Victor but he’s too drunk to help.

Derek and Estanislao try to keep Victor inebriated. Lalo is frightened as his operation draws nearer. Marisa is arrested over the jewel theft.

Doctor Martinez announces the results of Lalo’s operation. Cristobal learns from Marisa’s lawyer that she has been denied bail.

Calixta questions Marisa over the jewel exhibition. Richard tells Marisa she is to be transferred to the women’s prison.

Doctor Lanser puts Lalo into an induced coma. Marisa promises to be strong for her son’s sake. Estanislao tries to sell Calixta some jewels.

Catalina notices that Marisa always seems to be well-guarded in prison. Estanislao and Derek start preparing the stolen gems for sale.

Richard and his team apprehend Lazcano and Estanislao. Estanislao tries to bribe Calvo in order to get away. Derek denies any connection to them.

Calixta tells Jerome that the operation was successful. A homeless man takes Estanislao to his cave. Doctor Martinez has bad news about Lalo.

Cristobal is adamant that he will give no sign of doubting Marisa’s innocence. Derek offers Victor a bar job in spite of his alcoholism.

Cristobal is warned of the potential consequences should he formally accuse Thompson and Judge Rogers. Amador learns that Marisa has a sister.


Premiere episodes of Maid in Manhattan air on Telemundo from Mondays to Fridays at 16h20. The omnibus is on Saturdays at 12h10.

Coming up on Maid in Manhattan this May 2017:

Marisa beats Catalina in a basketball match, after which Marisa extracts a promise of good behaviour. Sara has a request for Thompson.

The doctors try to bring Lalo out of his coma. Mireya tells Victor she’ll have nothing to do with him while he is still drinking.

Judge Rogers sets Marisa’s bail at $200,000. Estanislao sells one of the stolen gems. Thompson speaks to Sara about the robbery.

Waking from his coma, Lalo talks to Marisa and Cristobal. Amador tells Victor not to visit the hospital given the state he’s in.

Oscar asks Frank to organise a  reunion with Marisa’s friends because he has something to tell them. Estanislao sets up a meeting in the barrio.

Cristobal refuses to discuss his private life. The doctors discuss Lalo’s condition with Marisa. Belinda worries about the paternity test.

Marisa explains to Cristobal that she wants the reporters to leave them alone, and fears they cannot be together.

Oscar and Calixta discuss Estanislao. Tito invites Bruno to dinner, but Bruno will not accept. Billany is enlisted in an arson plot.

Calixta and Tania are trapped in a fire at the Kali Café, which also distracts Cristobal and Marisa from their latest argument.

The doctors tell Jerome that Tania, though delicate, is past the worst. Yaya asks Derek whether the fire was anything to do with him.

Oscar suggests to Victor that they reconstruct the theft of the gems. Belinda fears Goyo will not accept a child he knows to be Hugo’s.

Cristobal is furious when he hears what Marisa said in her TV interview. Leticia tells her friends about her impending nuptials.

Lucas tells Carmen he does not want to interfere with Leticia’s plans to marry Rolando. Goyo is enraged when Belinda tells him about the test results.

Lucas tries to stop Leticia’s wedding. Sara calls Bruno, asking for his help. Victor has confused flashbacks to the night of the robbery.

Sara does her best to offend Marisa. The broker sells another of the stolen gems. Frank invites Marisa for dinner and a stroll.

Richard asks Oscar why he bothers with a useless drunk like Victor. Sara is underwhelmed when Cristobal keeps talking  politics at dinner.

The newspaper article about Cristobal and Sara leaves Marisa distraught. Yaya hears that getting Estanislao out of jail will not be cheap.

Oscar returns to the abandoned warehouse, where he encounters the Wall Street broker. Calixta asks Estanislao to help Marisa by confessing.

Frank tells Marisa he is willing to help with her new project. Tito tells Bruno he is grateful for his help in coming out.

Frank asks Mireya not to leave Victor. Cristobal sees a message from Bruno while he is using Sara’s computer. Alicia breaks down in tears.

Mireya asks Victor to seek treatment but he insists he is not an alcoholic. Marisa refuses Cristobal’s offer of help with her new project.

Oscar asks Richard to let him review the missing persons files. Catalina promises to put a saboteur inside Marisa’s project.


Premiere episodes of Maid in Manhattan air on Telemundo from Mondays to Fridays at 16h20. The omnibus is on Saturdays at 12h10.