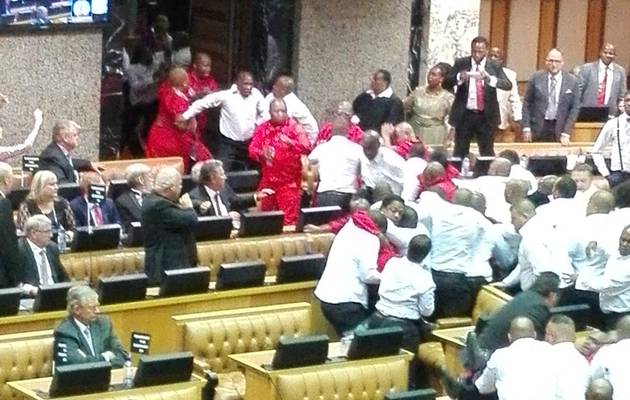 This was after opposition parties prevented President Jacob Zuma from delivering his 10th State of the Nation Address since taking office.

The chaos saw the Democratic Alliance stage a walkout from the chamber.

A Balanced Response to Allen Gwinn
Cybersecurity secrets that hackers do…
Carpenter Ants in House
Universal Tips on How to Promote Your…
MICRO BUSINESSES
It was opposition MPs and not Zuma who kicked proceedings off at the official opening of Parliament‚ raising various points of order.
Zuma was due to deliver his State of the Nation address at 7pm but he was held up by members of the EFF and DA‚ who raised security concerns and other requests.
EFF Chief Whip Floyd Shivambu was first to raise a point of order‚ claiming that 21 members of the South African Police Service were on standby in the house to arrest the party's members‚ using cable ties and biological weapons.
When Parliamentary speaker Baleka Mbete responded‚ saying that she could not act on rumours‚ party leader Julius Malema entered the fray.
"Please reassure us that we are safe in this parliament‚" he said.
Malema said that Mbete had a duty to uphold the Constitution and that the cable tie in his possession had been taken by the EFF from a security staff member at parliament‚ who was also issued with "biological weapons" - with reference to alleged injections which Shivambu had mentioned.
DA Chief Whip John Steenhuisen was also quick to raise a point of order‚ requesting a moment of silence for the 94 mentally disabled patients that died in Gauteng when they were moved from Life Esidimeni.
Mbete said the request would be entertained next week at the State of the Nation address debate.
DA MPs stood in honour of the deceased despite Mbete refusing them permission to do so.
As Zuma began delivering his speech‚ he was interrupted by the EFF's Godrich Gardee.
Gardee raised a point of order‚ saying the president is not fit to address the house because of “the failure by the NA to hold the president accountable" over Nkandla is inconsistent with the Constitution.
"The president is in breach of his oath of office…He cannot address honourable members including the presiding officers. Parliament is in contempt of the Constitutional Court."
ANC chief whip Jackson Mthembu pointed out that parliament had voted on the issue and had not removed Zuma from office.
Cope leader Mosiuoa Lekota said the following referring to Zuma: "In English‚ he is called a scoundrel. In our language‚ he's called a menne-menne. We have not broken our oath of office‚ now you want to make us complicit even though we did not break our oath of office."
The EFF’s Mbuyiseni Ndlozi was then ordered out of the chamber for calling Zuma a “constitutional delinquent”.
Ndlozi said there were people in the house he did not recognise.
“This is my house. They must leave. Do you know them? You look shocked even. Who are they? They must leave. That is the first point of order‚" he told Mbete.
He then addressed her on Zuma: “If you want to listen to a person who has broken the Constitution‚ go and do it elsewhere.”
Speaking to the president he said: “Mr Zuma‚ please leave‚ baba.”
Willie Madisha of the Congress of the People Party was then removed from the house by Parliamentary security services.
Malema said Zuma was rotten to the core as found by the Constitutional Court‚ after which a massive shouting match ensued.
Chair of the National Council of Provinces Thandi Modise said a joint sitting could not dismiss the president - it was the prerogative of the National Assembly.


This post first appeared on The Edge Search, please read the originial post: here
People also like
A Balanced Response to Allen Gwinn
Cybersecurity secrets that hackers don’t want you to know in 2021
Carpenter Ants in House
Universal Tips on How to Promote Your Business On Facebook
MICRO BUSINESSES