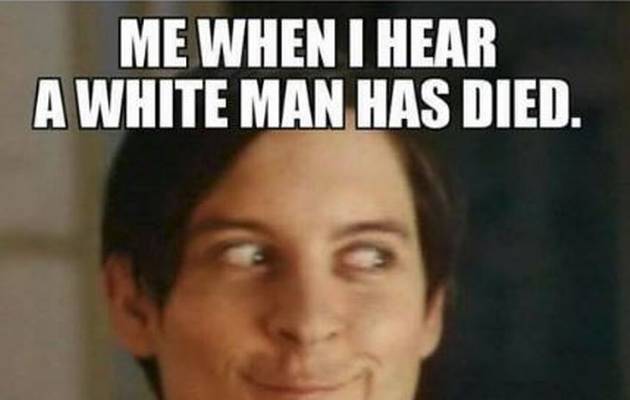 Riaan Lucas has raised South Africans' ire over his insensitive Facebook post in the wake of the death of Springbok legend Joost van der Westhuizen. 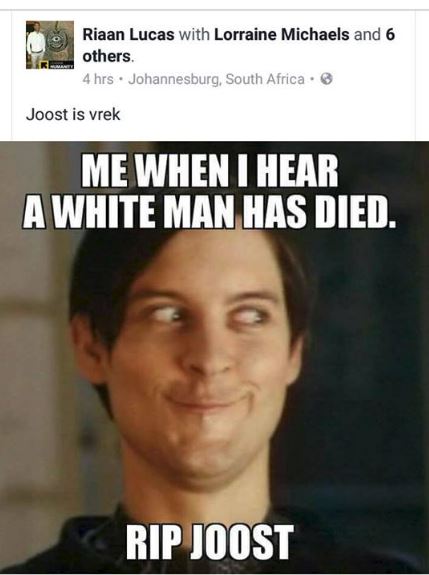 He took to Facebook on Monday to post a meme of actor Tobey Maguire smirking‚ with the words “Me‚ when I hear a white man has died‚ RIP Joost” - he captioned the post: “Joost is vrek”.

The backlash was swift and‚ despite Lucas deleting his Facebook account‚ screengrabs of his offensive comment went viral on social media‚ with many calling for him to be sacked and others saying he should face up to his actions in court.

Janneman Viljoen was among those who thought Lucas should be fired‚ posting: “Riaan Lucas‚ I hope your employer sees this and you lose your job and that you get what's coming to you... you sick‚ racist f***. Please share this post so we can make this a**hole famous.”

Louisvale Wines Stellenbosch‚ which acknowledged that Lucas had worked for them on a “casual basis”‚ said it “distances and disassociates itself from any comment made by Riaan Lucas on Facebook or any other channel‚ as well as his views”.

Lucas‚ the winery added‚ had assisted it with tastings last year but said: “We were unaware of his extreme racist views and reject them unconditionally.”

The Cape Wine Academy also distanced itself from Lucas saying he “is not and has never been an employee”.

“He was a student in 2011 and we distance ourselves from any comments made by him‚” the academy’s Michelle Grimbeek said.

On Twitter‚ the backlash trended under the #RiaanLucas hashtag‚ where Ingrid Jones @JonesIngrid angrily retorted: “This guy is a blot on humanity. #riaanlucas”.

This guy is a blot on humanity. #riaanlucas
— Ingrid Jones (@JonesIngrid) February 7, 2017

Patrick Mark Ellis shared a similar sentiment on Facebook‚ asking: “Will Riaan Lucas also be held accountable in court for his conduct as was Penny Sparrow etc. or does racism only apply when it emanates from whites?”

This was a reference to the retired South Coast estate agent whose comparison of black people on beaches to monkeys earned her two court-ordered fines last year.

Some Facebook users pointed out that this was not the first time Lucas had made racist comments‚ and shared a screengrab of a post of his that asked: “Why is the traffic acting up approaching Sandton? Was there a accident earlier? Please tell me it’s white people.”

Lisa Marcelle Hold summed up her disgust by calling Lucas “a despicable human being”.

“This is the coward and revolting human being who posted an insensitive post that is so wrong on so many levels‚” she wrote.

“A friend‚ husband‚ brother‚ father and one of our greatest rugby players died today after an incredible battle. I urge those reading this to repost this to expose this insensitive sick excuse for a human.”

Van der Westhuizen‚ a member of the 1995 Springbok team that raised the Rugby World Cup‚ died on Monday at his home after a battle with motor neurone disease.

Let's see if there really is any equality in this country and see if Riaan Lucas gets the same treatment as all the...
Posted by Arno Taljaard on Monday, February 6, 2017