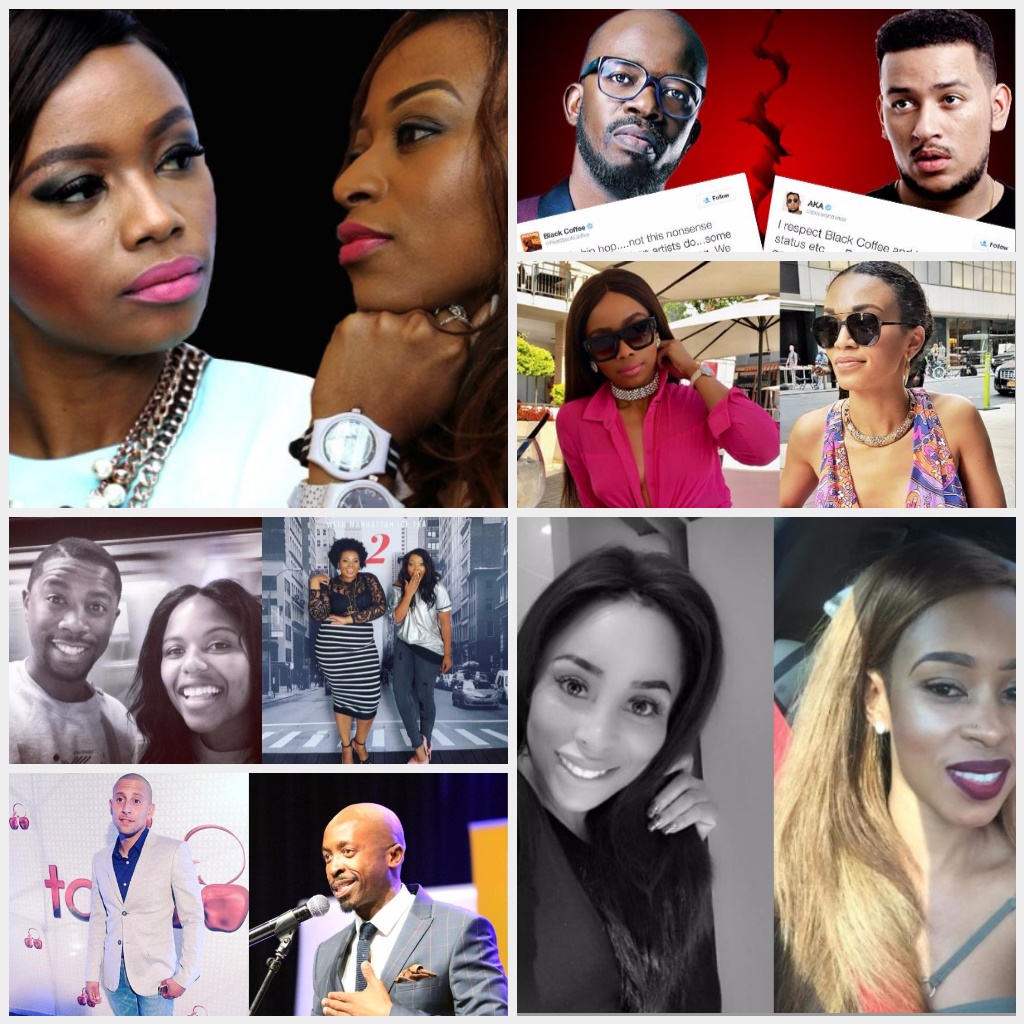 Here are SA’s biggest celebrity enemies right now; it’s never too late to kiss and make up guys!
Pearl and Bonang’s feud began when Bonang was chosen for the Revlon deal over Pearl and the two have been throwing shade at one another since then.Lexi and Loot Love’s beef is relatively new and started towards the end of 2016 after an incident at a celebrity event. Lexi took to Twitter to vent but Loot has taken the higher road since then.
Khanyi Mbau and Pulane had no real reason to cross paths until a fake Facebook page sparked a war between the two women. Khanyi slammed Pulane on Twitter for being “fake” following this incident.DJ Warras made headlines in 2016 after being caught in a bust up with Mzekezeke, Sbu’s alter ego. Let’s keep these guys out of the same room.

Building a Talent Pool in a Tight Mar…
Rise of Giza PowerNudge Slot (Pragmat…
Blueberry Muffin Mix Pancakes
Why I Chose to Be Vaccinated Against …
Giant Piece of Space Junk Expected to…
Atandwa Kani and his new wife are not on speaking terms with his ex, Thembisa Mdoda and her sister Anele. The messy breakup between Atandwa and Thembisa led to plenty of mudslinging in local tabloids.
Euphonik and Bonang’s #Nonke toxic relationship came to an end a few years ago but the DJ keeps provoking and attacking the presenter on social media every time someone mentions their relationship.
To be fair, if a woman (Buhle) claimed to sleep with my (Norma) husband, I don’t think we’d be the best of friends either. Buhle has done everything she can to get under the Gigaba’s skin including a series of open letters and outspoken posts.
Another week, another AKA Twitter war and this time he’s going at Black Coffee.
AKA and Bonang Matheba have since denied being in a relationship, but Matheba is not taking the allegations lightly. According to reports , her lawyers have sent a letter of demand to Dj Zinhle, instructing the deejay to apologise to Matheba and refrain from “publishing defamatory statements” about the TV presenter. Dj Zinhle did however respond to Bonang’s lawsuit when she created a crazy apology playlist and then hilariously poked Bonang on twitter.
International award-winning, DJ Black Coffee, slapped SA hip-hop artist AKA's manager, Tshiamo Letshwene, in what appeared to an altercation in Polokwane on Saturday night.
In a short video, Black Coffee is seen talking to two men, and while the conversation is still going, the house music producer suddenly unleashes a slap, hitting Letshwene in the face, causing his hat to fall.
Thabo ‘Tbo Touch’ Molefe blasts Lerato Kganyago after she claims Metro FM listeners increased when he left
Lerato Kganyago and Mo Flava replaced Tbo Touch after he resigned form his week day drive time show ‘The Touch Down’ on Metro FM.

On Thursday evening a fan tweeted Lerato saying,” Tbo Touch left with his listeners.” Lerato replied and begged to differ, “Is that why our listeners doubled? Ok,” she said.

Tbo Touch then hit back saying “I will quit radio and transfer R1 million into your account if you can prove this! You can lie but numbers don’t. How dare you!”


This post first appeared on The Edge Search, please read the originial post: here
People also like
Building a Talent Pool in a Tight Market
Rise of Giza PowerNudge Slot (Pragmatic Play) Review
Blueberry Muffin Mix Pancakes
Why I Chose to Be Vaccinated Against COVID-19
Giant Piece of Space Junk Expected to Crash into Earth this Weekend
Have transaction data from all your sources joined in one place