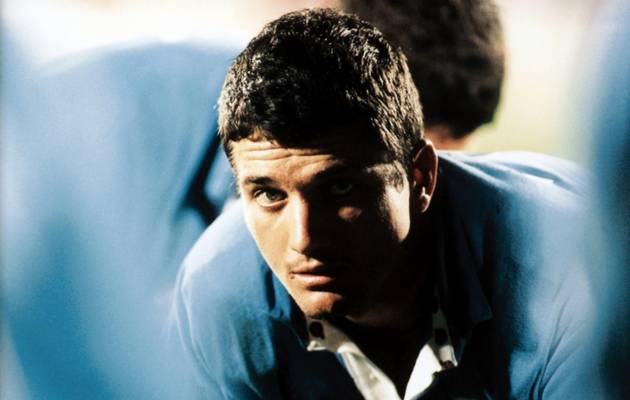 The lingering image of Joost van der Westhuizen is of him throwing himself at the feet of a rampaging Jonah Lomu in the 1995 World Cup final at Ellis Park to fell the behemoth at a time when others hadn’t.

He faced up to the physical threat Lomu posed with courage and single-mindedness. It was the same way he approached life after he was diagnosed with motor neuron disease (MND) in 2011.

Van der Westhuizen did not shy away from his condition and instead embraced the challenge of trying to find a solution while also raising awareness for other sufferers of the disease through his J9 Foundation. He tackled it head on‚ just has he cut Lomu down. Both are now gone‚ but neither will be forgotten as much for their rugby exploits‚ as for their courage and humility in the face of terminal illness.

Ultimately Joost lost the war against MND‚ when he died on Monday surrounded by family and friends‚ but he won many battles along the way.

He was 45 and leaves behind two children‚ Jordan (13) and Kylie (10)‚ as well as his father Gustav‚ mother Mariana‚ and brothers Pieter and Gustav.

He was rushed to a Johannesburg hospital on Saturday and was placed on life support. Van der Westhuizen is the second player from the 1995 World Cup-winning Bok team to pass away‚ following flank Ruben Kruger who died of brain cancer in 2010.


In 2008‚ five years after retirement‚ Van der Westhuizen noticed he was losing strength in his right arm and by 2011 he was diagnosed with MND – an irreversible degeneration of the nerve cells that control muscles.

As he physically withered‚ losing the ability to speak and walk‚ Van der Westhuizen never lost his sense of humour or his willingness to fight the disease. He did it for himself and he did it for other MND sufferers who he tried to help through his foundation.


“If we don’t have hope‚ we have nothing. And if you mean that to anyone then we are successful‚” Van der Westhuizen told ESPN in 2015.

“I know now for the first time how to invest our ideas to care for other people. When I was playing‚ everyone cared about me‚ including myself.”

As a player he redefined the scrumhalf role with his athleticism and willingness to take on defenders in narrow and wide channels and became the benchmark for halfback excellence.

“There are so many things you can say about Joost‚ but the one thing that I keep coming back to is that both as a player and person he was a warrior and a fighter‚” former Bulls and Bok coach Heyneke Meyer said.

“Joost was a great defender‚ he was like an extra flank in that position and in that sense he was well ahead of his time.

“It was great to coach him. People didn’t want to run in his channel because he was massively physical.”

Van der Westhuizen made his name as a high school scrumhalf in east Pretoria with the unfashionable FH Odendaal team that went all the way to the Administrator’s Cup final in 1987.

In 1988 he was selected for the Northern Transvaal Craven Week team and after three years at Tukkies‚ where he made his mark‚ his rise to Test star began.

He was invited to Northern Transvaal trials in early 1992 and attended‚ secretly hiding a broken small finger on his left hand‚ which he injured in a ‘koshuis’ game. The trial wasn’t a success with Van der Westhuizen losing out to future Bok teammate Johan Roux for a place in the initial squad.

But two months later he starred for Tukkies as they beat traditional rivals Maties in front of 40 000 people at Loftus. His performance earned praise from no lesser luminary than Danie Craven‚ and the following week Van der Westhuizen was included on the Northern Transvaal bench for a ‘Night Series’ game against Transvaal. He came on as a wing late in the match with Northern Transvaal winning 22-14.

His progress was rapid that season‚ eventually ousting Roux as first choice scrumhalf at Loftus. Roux would move 50km south to Johannesburg the following season to play for Transvaal.

Later that season Van der Westhuizen was chosen as the Junior Springboks’ starting scrumhalf against the touring All Blacks. The following year he sat patiently on the bench for five Tests against both France and Australia before his Test chance came.

His dazzling‚ unorthodox‚ attacking halfback play and rock solid-defence marked him out as someone special and by October of 1993 he was selected for the Boks to play against Argentina. It was the first of 89 Tests for the Boks and naturally he scored a try on debut and added another a week later in the second Test.

Van der Westhuizen had earlier made his Bok debut against Western Australia at the Waca in July‚ scoring four tries in the process. It was the start of a decade-long‚ highlight-filled association with the Bok jersey that saw him play 111 matches for South Africa and score 56 tries.

After his Test debut Van der Westhuizen lost his starting place to rival Roux for the tour to New Zealand in 1994 after his part in a humiliating 32-15 home loss to England earlier in the year.

Van der Westhuizen didn’t feature once in the 1994 three-Test series against the All Blacks in NZ‚ but was reinstated when Kitch Christie became Bok coach at the end of year.

A year earlier Joost made his Test debut against Argentina and 12 months on‚ he was back in the starting XV after Roux suffered a knee injury during the first Test in PE. Van der Westhuizen grabbed the chance at Ellis Park and never looked back. Roux would be consigned to second choice for the remainder of their overlapping careers.

Of course‚ 1995 was to be the greatest year in Bok rugby and Van der Westhuizen was a central figure in the success.

His performances at the World Cup were busy and laced with that searing drive to win and to compete. Nowhere were those traits better epitomised than in the final against the All Blacks.

Lomu‚ a wing at 1.95m and 118kg‚ had changed the rugby world and he seemed unstoppable. Inside the first 10 minutes of the final Lomu broke the Bok defensive line‚ but Joost stopped him in full flight with a head on tackle.

Ellis Park erupted and Bok chests swelled. Lomu even looked stunned. It was probably the moment that turned the final the way of the Boks. And it was the moment that bound the two players together.

There were many rugby highlights after that such as being part of the 1997-98 team that won the Tri-Nations and won 17 Tests in a row‚ or captaining the Boks at the 1999 World Cup.

Van der Westhuizen also led the Bulls to the 1998 Currie Cup title‚ ending a seven-year wait for the trophy to return to Loftus. He again captained them to the Currie Cup crown in the twilight of his career in 2002‚ leading a young team that contained Victor Matfield‚ Bakkies Botha and Derick Hougaard.

His competitive streak saw off challenges from many pretenders even at the age of 33. His final Test appearance came against the All Blacks in the quarterfinal in Melbourne‚ marking the end of his Test career.

Joost earned 89 Test caps and scored 38 Test tries‚ a record that wing Bryan Habana broke at Rugby World Cup 2011 when he scored against Namibia. He also captained the Boks 10 times‚ which included the 1999 World Cup where SA finished third.

He was nominated for the SA Player of the Year award six times‚ but never won.