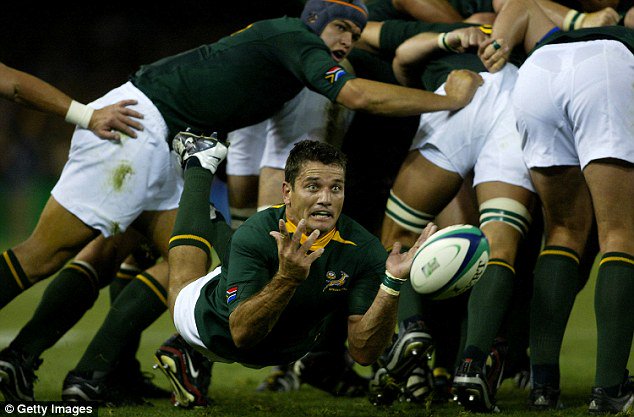 The news of Joost van der Westhuizen's death has seen the sporting community join together to pay tribute to a man who is considered one of the greatest scrumhalves in history.
The former Springbok scrumhalf died on Monday after losing his battle with motor neuron disease.
He was 45.

Van der Westhuizen was rushed to hospital in a critical condition on Saturday, his J9 Foundation confirmed.

Despite stabilising and showing signs of acknowledging those around him, Van der Westhuizen passed away on Monday afternoon.

Tributes poured out on Twitter for the former Springbok player:

Probably one of the greatest Boks ever and a close friend has lost his battle rip my Buddy
— Rob Louw (@roblouw6) February 6, 2017

Today...we cry together as a sporting nation.

A great friend has left us with an incredible legacy in rugby. Joost inspired on and off the field. Rest easy blue eyes.... #j9foundation
— Matt Dawson (@matt9dawson) February 6, 2017

An inspirational figure of our game on and off the field. Our thoughts are with the family & friends of Joost at this time #RIPJoost pic.twitter.com/CXP3ahkeMl
— Saracens Rugby Club (@Saracens) February 6, 2017

Our deepest condolences go out to the friends and family of Joost Van Der Westhuizen. RIP Joost.
— Harlequins (@Harlequins) February 6, 2017

RIP [email protected]
What a man, kept fighting right to the end!
An inspiration to all rugby players from all countries!
— Brad Barritt (@bradbarritt) February 6, 2017

What a man what a player @9Joost !!! Boks best no9 and one of the all time greats to play the game ??.rip legend,we had some awesome times??
— Herschelle Gibbs (@hershybru) February 6, 2017

RIP Joost... a pioneer in the number 9 jersey in world rugby. An example that we are all mortal… https://t.co/COn0MUaE6h
— Simon Harmer (@SimonHarmerRSA) February 6, 2017

He was an amazing man. I had the great privilege & honour to meet him through my wonderful friend Gavin. Thoughts & prayers go to his family https://t.co/GKml9XhXtx
— Shane Warne (@ShaneWarne) February 6, 2017

May God keep your soul in comfort JOOST.We were truly privileged to view your https://t.co/bB7S9LtqJQ.condolences to his family and friends.
— Marc Van Heerden (@marc1308) February 6, 2017