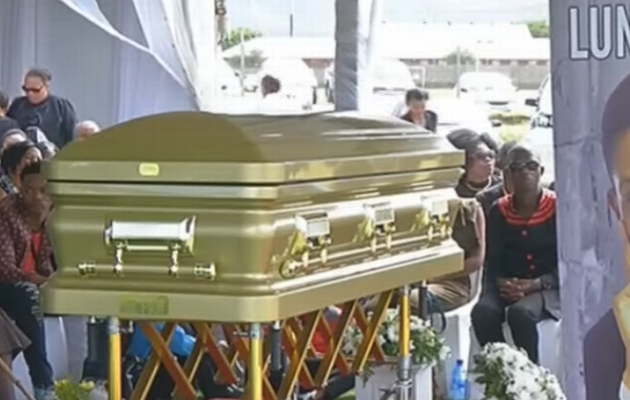 Hundreds of mourners on Sunday gathered at the Zwelethemba Stadium in Worcester in the Western Cape to bid final farewell to their favourite gospel star‚ Lundi Tyamara.

The 38-year-old died last month at the Edenvale Hospital in Johannesburg after being treated for tuberculosis.
He was described as a hero who was caring and giving to both his friends and family.
The who's who of the Gospel industry were present at the service‚ with legends like Rebecca Malope and Deborah Fraser giving live performances which had the crowd singing along and dancing.

Short Happiness Quotes From Famous an…
Bogobiri House Ikoyi Lagos: Fun thing…
Sara y Ava: la pareja lésbica de Lege…
Bikepacking - A Brief Introduction an…
Best Low Acid Coffees That Won’t Upse…
Malope‚ a long time friend and mentor‚ gave a touching tribute which left many in tears‚ singing a song titled “Goodbye My Son”.
Popular gospel artists like Dumi Mkokstad‚ the Jaziel Brothers‚ Bathabile Mcinga and Veliswa Skeyi kept the crowd singing and dancing‚ turning the funeral into something of a gospel concert.
Addressing the mourners‚ family member Nokuzola Tyamara said Lundi taught the family love.
“He was never afraid to apologise when he has wronged you‚” she said.
She said Lundi was the backbone of their home.
“I would be lying if I said as the family we are celebrating Lundi’s life. For now‚ it’s still dark. It is difficult to let it go ...‚” she said.
His friend Thulani Mangona described Lundi as a superstar and a colourful person who was loved even in countries outside South Africa.
Anele Hlazo‚ Lundi’s manager‚ said he felt privileged to have been one of the few people who worked with the gospel star.
Arts and Culture Minister‚ Nathi Mthethwa‚ who was a keynote speaker at the service‚ said the Country ended 2016 and started 2017 on a sombre mood.
He said the deaths of kwaito star Mandoza and gospel singer Sfiso Ncwane in 2016 shocked the country. 2017 began with the death of Jazz legend Thandi Klaase‚ who was laid to rest last week.
“All these tragedies came in a time when our country needs their wisdom and contribution towards our efforts to national building and social cohesion‚” said Mthethwa.
Mthethwa said Lundi touched “our lives in different ways” and the tears shed were a direct result of the void his untimely passing left.
He called on the country to ensure that the youth of South Africa lived a healthy life as they were the future.
“To you Lundi‚ you fell asleep without goodbye but memories of you will never die. Time will pass and fade away but memories of you will always stay‚” said Mthethwa.