‘I am scared’ – SABC 8 journalist who was shot in face 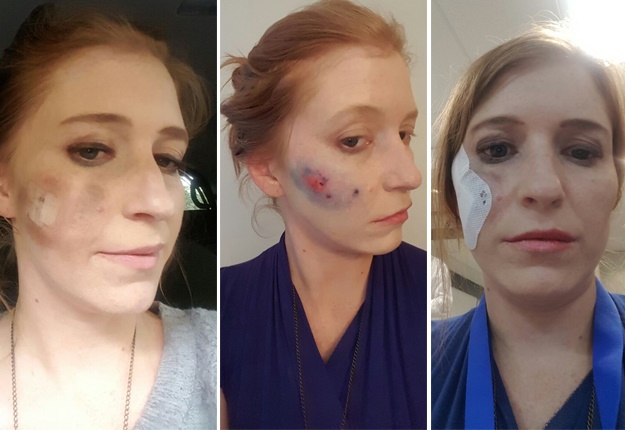 ‘SABC 8’ journalist Suna Venter, who was shot in the face with a pellet gun two weeks ago, says she is lucky to have survived the traumatic ordeal with no serious injuries.
“The doctors say, if the bullet had followed a different route, it would have gone into the eye. They regard me as very lucky. Despite what happened, it was a good outcome,” she told News24.
Venter said she was attacked while coming out of a restaurant in Linden, Johannesburg, while buying take-away food.
“As I was leaving, I felt like someone slammed me from behind, and I was bleeding.”
She said she did not immediately realise that she had been shot and had tried to stop the bleeding with a bandage.
“I eventually went to a doctor, who said it was a [pellet] gun [that injured me]. They did a CT scan and, on Monday, removed the bullets.”
Venter was part of a group of eight Sabc journalists who were fired for objecting to former COO Hlaudi Motsoeneng’s policy of no longer airing footage of violent protests. Seven of them were later reinstated.
At first, she thought the assault was a botched robbery, but said police had told her they suspected that the incident was part of an intimidation attack on the SABC 8.
“When I spoke to my boss and the police, they said something doesn’t look right and it doesn’t look like a botched mugging because the attackers did not take anything. They think it’s a continuation of the intimidation and it was added to the dossier.”
Venter said the police dossier was part of the Constitutional Court bid against the unlawful conduct at the SABC.
Since the SABC 8 took on the public broadcaster, she had been the subject of intimidation, Venter told News24.
“It’s been going on for six months. There have been two break-ins at my house. The house was trashed, but nothing was taken. I’ve had… [my] car broken into outside my friend’s house and text messages keep coming saying I’m going to die.
“I have become numb… None of us have any intention of dropping our case. We are fighting for the SABC. It’s going to get ugly and we knew this. If I would tell you I’m not worn out and scared, I would be lying.”
Four members of the group – economics editor Thandeka Gqubule, SAFM current affairs executive producer Krivani Pillay, parliamentary journalist Lukhanyo Calata, and former contributing editor Vuyo Mvoko – represented the eight at Parliament’s ad-hoc committee hearings in December.
It is holding an inquiry into the fitness of the SABC’s embattled board to do its work.
They described a reign of impunity and culture of fear, interference, and censorship at the public broadcaster.
Venter said she mistakenly told DA MP Phumzile van Damme by SMS that the incident occurred late last year.
Source: News24

‘I am scared’ – SABC 8 journalist who was shot in face