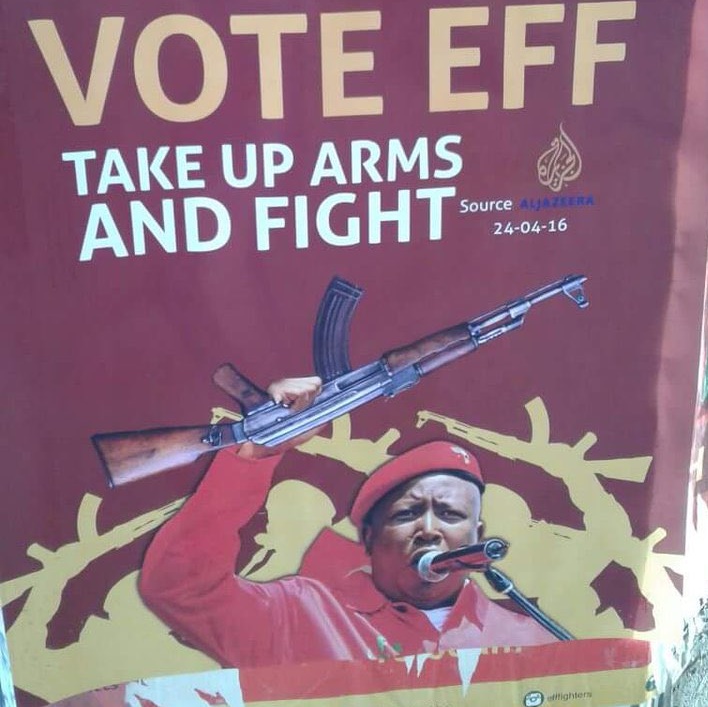 E.g If ANC promises to pay you 2 million if kill EFF leader then you agree, you start your processes. Then they don’t want to pay you as agreed, what will you do?  Go to court to help you get the money back or go to court to surrender yourself for the crime you have done?

Sihle Bolani cannot be trusted if there is no one giving her money to disclose all this information.  Why she is not just reporting crime ANC did instant she want the court of law to help recoup dirty money?  There is something fishy in this revelation I want to wait and see which court will help criminal to get dirty money.

She says that she had no choice but to take the matter to court after the ANC failed to remunerate her for her work.

The reason I had to go to court is because numerous attempts to have my invoice settled have failed.
— Sihle Bolani, MD of Sihle Bolani Communications

Bolani is adamant that she is able to support her version of events with evidence.
Take a listen to her testimony:
Meanwhile, the ANC continues to reject the allegation that that they were involved in a covert 'war room' operation.
ANC national spokesperson Zizi Kodwa explains that the party had no contractual agreement other than with media partner Ogilvy.

In the ANC, we don't run covert or dirty campaigns against our opponents.
— Zizi Kodwa, ANC spokesperson

This despite a written commitment by ANC general manager Ignatius Jacobs to pay Bolani a R1 million settlement agreement.
Kodwa says that Jacobs' agreement with Bolani was not binding with the ANC.
He says the party will have an internal investigation.
Take a listen to Zizi Kodwa's side of the story:
Also take a listen to investigative journalist Susan Comrie unpack the unfolding events:
Written by: Qama Qukula 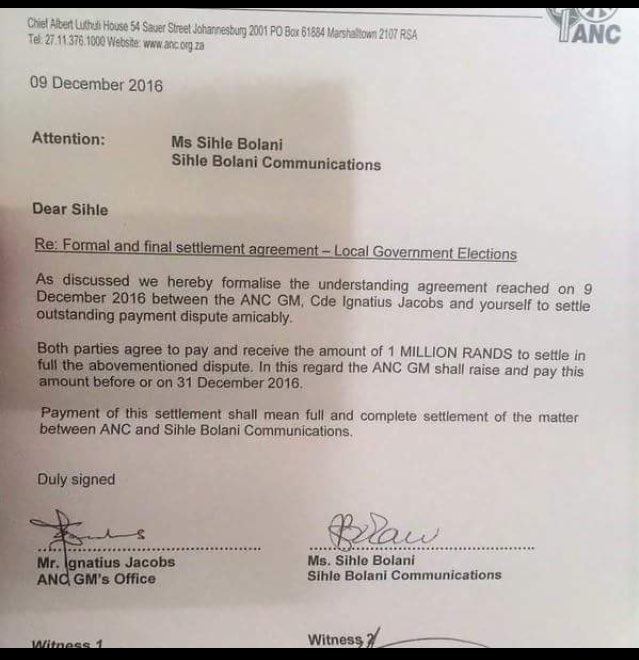 The campaign that 'never existed'
Officially, there was supposed to be no link between the War Room and the ANC.
The team, later known as the “Media Advisory Team”, would be led by activist Shaka Sisulu. ANC-linked businessman Joseph Nkadimeng was to source funds from private donors. The team was to operate from separate offices.
In the close-out report, Bolani says Sisulu and Nkadimeng told team members during an inception meeting last April that “the ANC has commissioned this project as part of the 2016 Municipal Elections”.
However, Sisulu “made it very clear” to her that she should “not at any point, have direct contact with Luthuli House”.
The inception meeting was held last April at the Bryanston headquarters of advertising agency Ogilvy & Mather, which the ANC had contracted for its election campaign. Ogilvy appears not to have participated in the team’s subsequent activities.
In an interview with amaBhungane, Bolani described the campaign as effectively a “propaganda machine”.
“A lot of the work they needed us to do they didn't want it to be branded ANC… I think the intention with this vehicle was to do all the stuff that they can't do as the ANC. So I think the directive from Ignatius [Jacobs] was ‘go crazy just don't link us [to it],” Bolani said.
Fake posters 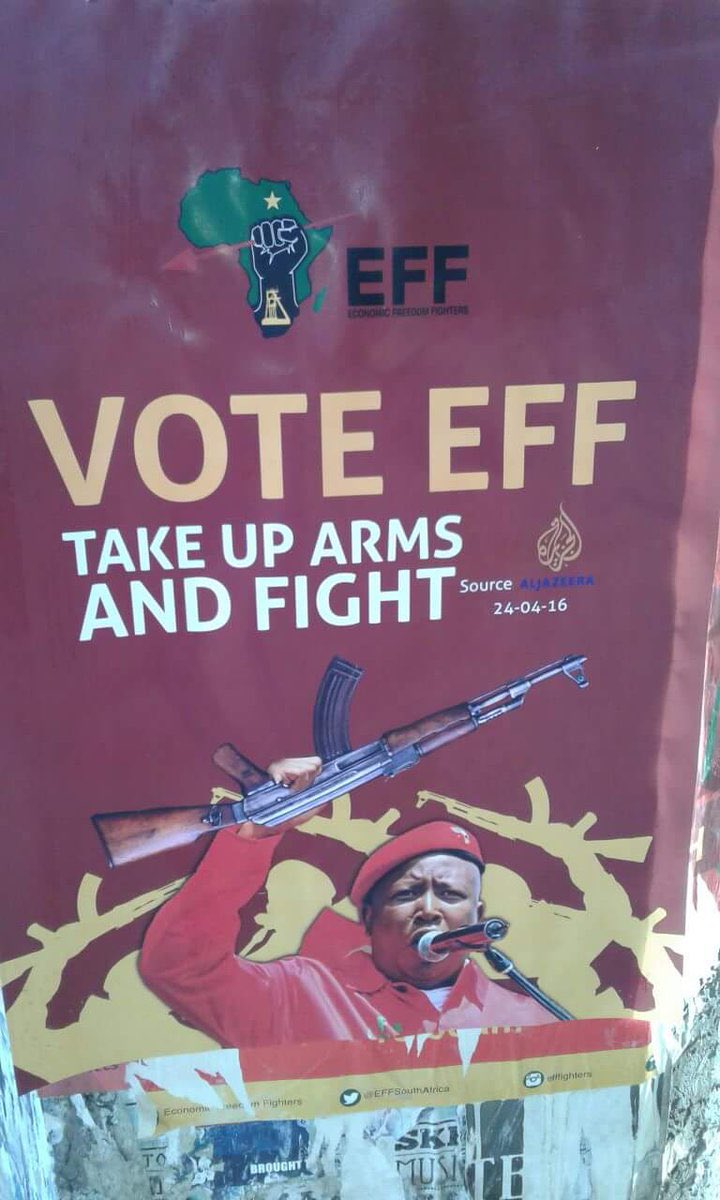 According to the close-out report, this included spending R10 000 to “develop and plant EFF posters to disarm the opposition”.
Bolani told amaBhungane: “They were meant to be mistaken for EFF posters… [The service provider] was supposed to get a poster done that looks, feels exactly like the EFF campaign posters but has a picture of [EFF leader] Julius Malema on the front holding a rifle, because it was after all of those comments about taking up arms for land.”
According to the report, Bolani suggested planting callers on talk radio station 702 in order to create publicity around the posters. However, the report questions whether the posters were actually printed.
In addition to the posters, the team planned to produce 25 000 “knock and drops” – news sheets delivered door-to-door, highlighting Malema's “we are not fighting whites” statement at a June 16th rally.
Aside from these two projects, the team appears largely to have fought its battles in the digital space.
Digital influence
This included planning to establish a network of 200 social media “influencers” – celebrities and others who would be co-ordinated to start conversations about specific topics on Twitter and Facebook. The report suggests far fewer influencers were recruited in the end.
Team minutes reproduced in the report include entries such as: “Today’s activities… Influencer mobilisation: Corruption within the organisation, EFF in parliament, problems with EFF and DA, basic needs of the poor not cared for (anti-DA) and Black Face (anti-DA).”
The team launched a news site, The New South African, which claimed to be a “platform for new voices offering a different perspective of South Africa”. It was however supplied, according to the report, with 150 stories by the team, including many advancing the ANC’s narrative.
Bolani told amaBhungane: “The New South African was about covering stories that spoke to successes that the ANC had in certain municipalities and then also just adding exclamation marks to fails for other parties.
“The SABC and ANN7 are openly known to be pro-ANC, so generally when people watch this they take it with a pinch of salt. So when there's a completely new platform that doesn't seem to have any alignment… then people are a little bit more open.”
Records show the site was registered by Majota Kambule, better known as broadcast personality Phat Joe.
Fake posters a breach of electoral laws
Fake elections posters, as the War Room had allegedly planned to print, are as much as a no-go as fake news.
Said Electoral Commission of SA (IEC) spokesperson Kate Bapela: “In terms of the Municipal Electoral Act it is prohibited conduct to publish false information with the intention of influencing the conduct or outcome of an election.
“The electoral code of conduct [also] precludes a party or candidate from acting or using language in a way that provokes violence during the election.”
Breaches of the code are a criminal offence – individuals can be sentenced up to 10 years in jail while political parties can be stripped of votes or deregistered.
According Sihle Bolani’s affidavit, the ANC was instrumental in setting up the covert campaign team known as the War Room. However, funding for the campaign would be provided by private donors.
Structures known as super PACs (political action committees) have become a common feature of US politics. However, there are strict rules prohibiting political parties from interfering in what are supposed to be independently-run and independently-funded campaigns.
“In South Africa the private funding of political parties and the private funding of electoral campaigns is presently not regulated,” said Bapela. “The position of the electoral commission is that it is desirable to put in a place a nationally-agreed regulatory framework for the future.”
The War Room’s campaign also featured a seemingly-independent news website, The New South African.
Although it is a contravention of the Press Code for news organisations to take funding from political parties or to push a particular party’s agenda, these rules only apply to media that voluntarily subscribe to the code. Publications that have chosen to opt out, such as The New Age, are not bound.
The ANC has denied any involvement in or knowledge of the campaign. Bolani’s case is scheduled to be heard in the High Court in Johannesburg on Tuesday.