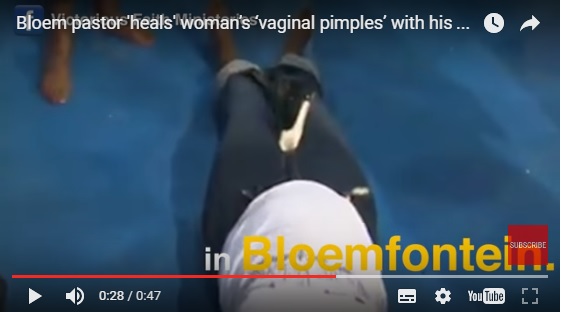 Pastors forcing congregants to eat snakes‚ braids‚ paper‚ rocks and dirt‚ spraying insect killer over them and making them strip naked - all in the name of healing. But just when you think you’ve heard it all‚ a Bloemfontein pastor adds a new twist – healing with his shoe.

A video‚ uploaded on the pastor’s Facebook page on January 5‚ shows Pastor Zendile Andries November of Victorious Faith Ministries in the Free State capital asking one of his female congregants whether she has “pimples” on her vag!na. When she replies ‘yes’‚ a man removes November’s shoe and the pastor is seen handing it to the woman to place between her thighs.

7 Reasons Why You Should Hire A Femal…
A Furry’s Guide to Cryptocurrency
How Gender Equity Impacts the Bottom …
How To Run a Beauty Salon And Not Los…
Keeping in Touch – Chapter 1
She then suddenly falls to the floor with the shoe between her thighs. Another female member is then shown saying that she went to the bathroom with the woman and that she is now healed and will finally be able to sleep with her husband.
The woman is crying and there are cheers all round as the pastor tells her to rush home - meaning home to her husband as she is healed.
The video was has received many positive comments‚ with some people said they receive blessings through it.
“Pastors from the church I used to attend used to say that I am called to be a pastor. I shadowed Bishop P.V Ndhlebende of Faith Gospel Ministries until I was ready to open my own church‚” November told TMG Digital.
“The woman came to me about pimples on her vag!na. This made it impossible for her to sleep with her husband. Because the problem was on her private part I decided to use the shoe rather. I believe in miracles and God uses anything to heal‚” he said.
The pastor also claimed that he can cure HIV/AIDS and other spiritual problems.
“I also cured a lot of people of HIV/AIDS‚ immediately after praying for them I ask them to go to the nearest clinic and test. Most of them come back negative‚ and those that are positive I encourage them to have faith and continue to pray for them. I specialise in deliverance for those who are demon possessed‚ spiritual husbands and diseases.”
In 2011‚ the Sunday World reported that its journalists had witnessed Prophet Paseka Motsoeneng‚ popularly known as Mboro‚ pump his fingers into the vag!na of a 17 year-old-girl whom‚ the pastor claimed‚ had a swelling belly because a sorceror had cast a spell on her.
Another woman suffered from dyspareunia – or “se_x hurt” - was “cured” when Mboro put his foot on her vag!na.
– TMG Digital


This post first appeared on The Edge Search, please read the originial post: here
People also like
7 Reasons Why You Should Hire A Female Divorce Attorney
A Furry’s Guide to Cryptocurrency
How Gender Equity Impacts the Bottom Line
How To Run a Beauty Salon And Not Lose Your Own Beauty
Keeping in Touch – Chapter 1
The Eight Wives of Henry VI society (EWH6)
Music Profile: Jackie's Boy - R&B Artist - Georgia, Usa | SRL Networks London Music PR
Sex on Your Period – Reasons to Do It