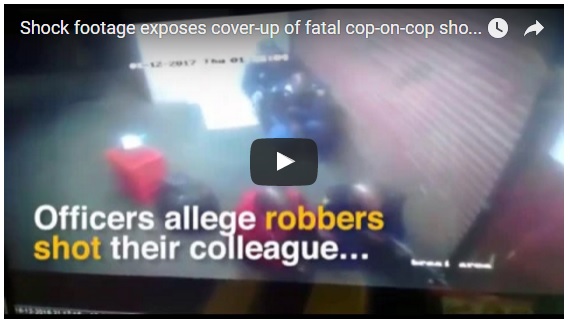 Police officers appeared to have lied about the circumstances surrounding the shooting and subsequent death of a colleague during a robbery at a Katlehong petrol station last Thursday. (Warning: graphic imagery not for sensitive viewers)

Earlier today‚ Gauteng Police spokesman Captain Kay Makhubela said the police Officer was shot after being "ambushed by heavily armed criminals" and that a case of murder‚ attempted murder and business robbery was being investigated.

Wuzzuf’s Ameer Sherif Steps Down as C…
Best Home Sauna To Stay Warm All Wint…
Digital.com Survey: Most Consumers Un…
Deep Purple Announces New Album ‘Turn…
Karen Wiesner: The Stories Behind Cla…
But video footage has called into question the police’s version of events.
The shocking video footage taken from security cameras and timestamped last Thursday night shows three uniformed officers and another man in civilian clothing hiding in what appears to be a rest area. They begin firing at unseen assailants. A uniformed officer in front of his colleagues opens fire repeatedly with an automatic weapon.
An officer flees from the area as the shootout escalates‚ leaving the Leading Officer and another positioned behind him facing the armed robbers.
As the leading officer retreats from his firing position‚ he crosses the line of sight of the officer behind him who is also beginning to retreat. At that moment the policeman behind the leading officer opens fire at point blank range‚ appearing to hit him in the head. He collapses immediately.
The officer who shot him seems shocked for a moment‚ as if he realises what he has done and then retreats‚ leaving the man in civilian clothing with the injured officer. An officer later returns to the scene where he appears to be attempting to change the position of his fallen colleague.
Independent Police Investigative Directorate spokesman Moses Dlamini‚ who has seen the footage‚ said: "What is supposed to be reported is that a policeman was killed by another. But what is reported is that he was killed by robbers."
Dlamini said the incident had not been reported to them by the police as protocol requires.
"It is supposed to be reported to the station commander and the station commander makes sure it gets reported to IPID. It is the responsibility of all police officers to report such cases‚" he said.
Dlamini confirmed that they are investigating the killing of a police of by a colleague and possible tampering of the scene‚ as another police officer can be seen attempting to move the officer who got shot.
TMG Digital/The Times