PRIEST THREATENS TO AXE WIFE FOR DENYING HIM SEX! 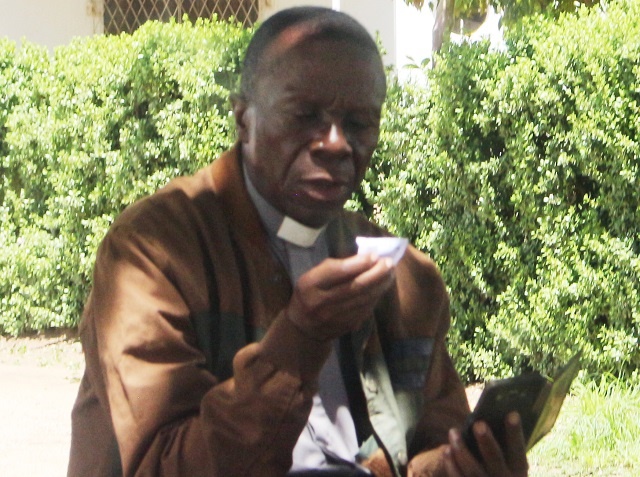 A Zimbabwean Anglican priest, 65, threatened to axe his Wife after he accused her of denying him his conjugal rights and of being "disrespectful", a report said on Wednesday.
According to the Chronicle newspaper, this came to light when Father Climax Dewa appeared in court on Tuesday in Bulawayo for violating a peace order not to physically and verbally abuse his wife, Doris Dewa, 38.

The Sign of Four
“We interrupt our regularly-scheduled…
Office Life – Preview – 2
The Rise of the Shaked Brothers
How to Keep Him Interested in You For…
Doris had applied for a peace order against her husband last year, as she accused him of physically, emotionally and psychologically abusing her. The order was granted to in April.
Father Dewa told the court during his appearance that his wife was a "gold digger". He also claimed that she was "disrespectful", adding that she also denied him his conjugal rights.
"She is disrespectful and has become the man in my house. She no longer treats me as her husband as the case before," Dewa was quoted as saying.
The magistrate advised the couple to seek counselling. In 2015, a pregnant woman reportedly stunned the court after she begged the magistrate to dissolve her marriage with her pastor husband, claiming that sex with him was “too much to bear”.
Susan Mumpande, 32 at the time, said her marriage was not working because of her husband’s “bedroom tactics”, iHarare reported.


This post first appeared on The Edge Search, please read the originial post: here
People also like
The Sign of Four
“We interrupt our regularly-scheduled programming to bring you this important message. . . .”
Office Life – Preview – 2
The Rise of the Shaked Brothers
How to Keep Him Interested in You Forever
حقوق الزوجة على زوجها
Hindi Short Film – Rajma – A husband and wife’s story during lockdown
Interview with the legendary comic book artist and writer William Messner-Loebs

PRIEST THREATENS TO AXE WIFE FOR DENYING HIM SEX!