Did You Know ANC Spent R76K On Booze For Its Birthday Bash drinking spree.? 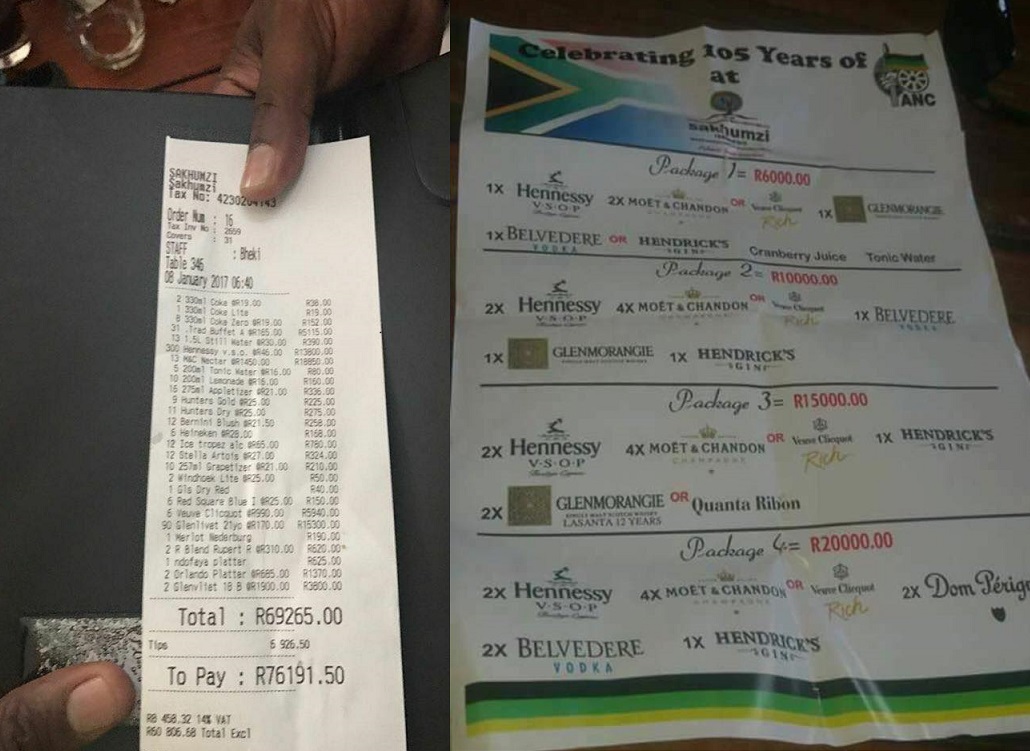 The invoice circulating on social media on Monday morning, indicated that at least R76 191 was used to buy alcoholic drinks the morning of January 8 at Sakhumzi Restaurant, which is located in Soweto.

Minutes later, another alleged document was also released from Sakhumzi. The document revealed packages allegedly made available to people attending the ANC event, with the most expensive of such package costing R20 000, which would get you two bottles of Hennessy, six bottles of French Champagne (two of them Dom Perignon), two bottles of Belvedere Vodka and one bottle of Hendricks Gin.

This comes days after the party’s women league, ANCWL slammed the Gauteng Liquor board for trying to relax its liquor rules in the city following the party’s birthday anniversary.

The league at the time, released a statement saying GLB’s decision to relax the rules around the sale of alcohol for the ANC’s 105th birthday bash will allow the historic event to be viewed as a drinking spree.

The primary aim of January 8, is for the ANC to reflect on successes and challenges of the previous years and outline the organisation’s programme for the current year, the league said.

Fikile Mbalula, the ANC’s head of campaigns, at that time, denied that he applied to the Gauteng Liquor Board to have some of its laws relaxed on Sunday so that liquor stores could remain open for a longer time than normally allowed by law.

He said the party had no authority or power to influence the Liquor Board.

However, the city of Ekurhuleni denied the alleged documents allegations levelled against its MMC of human settlement, Lesiba Mpya, and chief of staff in the mayor’s office, Reckson Hasani, regarding the abuse of a government credit card on booze.

The City, according to the citizen, distanced itself from the invoice and said the allegations are “unfortunate” as the city apparently has “no credit cards for any executive or staff member”. The city also said Mpya and Hasani were not at Sakhumzi on January 8.

“The allegations are unfortunate as the City of Ekurhuleni has no credit cards for any executive or staff member. The two public representatives of the City of Ekurhuleni further clarified that they were not at the alleged venue at that time of the morning. The two representatives were well within their rights were at the January 8 festivities and supporting the event,

“This message was affirmed in the January 8 statement and we regret the sensationalism created around false allegations around the public representatives of the City of Ekurhuleni. As the City we remain focused on delivering service to our people and ensuring that we strive towards unity and delivering on our mandate and social contract with the people of Ekurhuleni,” the city said in a statement.

Did You Know ANC Spent R76K On Booze For Its Birthday Bash drinking spree.?