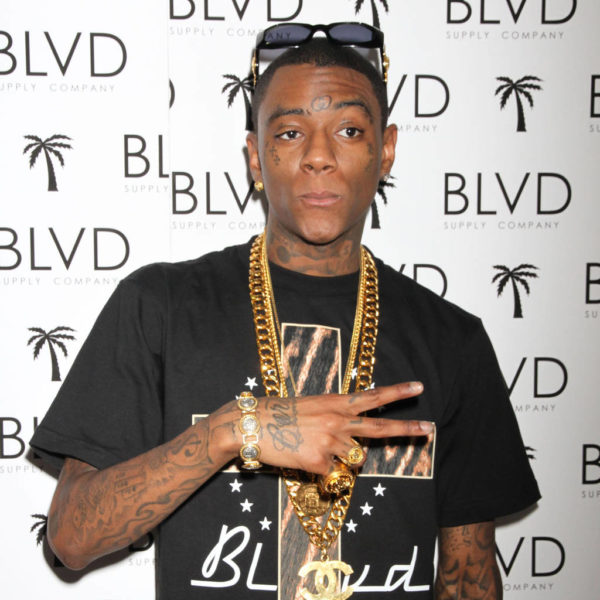 Soulja Boy has enlisted Floyd Mayweather to make his boxing match with Chris Brown happen.
The Crank That (Soulja Boy) star sparked an online feud with Chris on Monday (02Jan17) by taking to Twitter to claim Chris had called him up and threatened to fight him because the rapper ‘liked’ a picture posted by the Loyal singer’s ex-girlfriend Karrueche Tran.
Soulja Boy also referenced Chris’ 2009 assault on then girlfriend Rihanna in his rant, calling the R&B star an “irrelevant a*s woman beater” and writing that Chris was unable to look after his two-year-old daughter Royalty.
The 26-year-old musician’s insults caused Chris, 27, to challenge him to an organised fight, saying in an Instagram video, “I give you three rounds Soulja, three minutes. Thirty seconds, when that adrenaline run out, you’re gonna have to deal with a n**ga that’s been training.”
In a video obtained by TMZ.com Soulja showed he was taking Chris’ challenge seriously by getting boxing legend Floyd Mayweather to promote the fight.
Floyd and the rapper, real name DeAndre Cortez Way, stood side by side smiling in the clip, with Soulja saying that the “fight of the century” would be handled by the boxer’s company Mayweather Promotions.
In a video posted on his Instagram page, Chris accepted the challenge and slammed the musician for bringing Royalty into their feud.
“Stop bringing my daughter into this, my n**ga,” he said. “Stop saying s**t about my f**king daughter, bro… That s**t ain’t cool. Real gangstas and street n**gas know number one rule: no girls, no daughters, no kids. You’s a b**ch, my n**ga. Stop (sic).”
The agreement to fight came after Soulja Boy appeared to back down from the stand-off by apologising to Chris.
Karrueche, 28, wasn’t impressed by either man’s behaviour as she reportedly commented on Chris’s Instagram page, “First off this drama between both of these two is so ridiculous it makes no sense. We just brought in a new year and what we doing…?? This isn’t cool or funny… it’s draining… not just for me… but for everyone. There’s so much more out there in life then ‘twitter beefs’.”
At the time of going to press the warring musicians had yet to set a date for their encounter in the ring