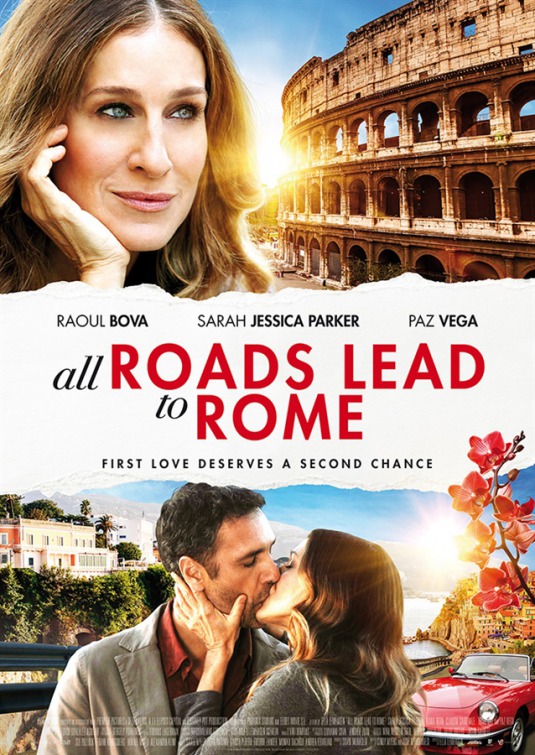 Coming up on All Roads Lead to Love this December 2016:

Pablo is told that he is a compatible kidney donor for Betty, but Eva does everything she can to dissuade him from agreeing to go through with it.

Pablo prepares for surgery - but fate intervenes. Camila and Andres Palacios get intimate. Leila tries to stop Sebastian’s autopsy from going ahead.

Leila is caught trying to cover up Sebastian’s murder. Virginia tells Martha that Marlene is diverting the funds from Mon Sol to an offshore account.

Marlene forces Elsa and Javier to return the money they stole. Raul makes a confession. Eva has a plan, and Adriana agrees to help her carry it out.

Armando triggers an argument with Marlene when he decides to make his daughter Adriana a partner in the company. Pablo snubs Eva at Betty’s funeral.

A vengeful Soraya sets a devious trap for Robert, and he promptly falls into it. Marlene gives in to a fit of rage - with deadly consequences.

Soraya tells Robert she will get him out of jail - if he agrees to her conditions. Pablo suspects that Eva knows the truth about Andy and Rebeca.

Camila decides to turn Andy in. Marlene admits to Armando that she killed Marta out of jealousy. Bobby refuses to help the Monteverdes.

Soraya decides to buy the Monteverdes’ house and humiliate them. The truck drivers start resigning from Mon Sol in order to go and work for Eva.

Leila receives a harsh sentence for her crimes. Pablo takes Ana Maria to a restaurant, but their evening out is ruined by an unexpected encounter.

Pablo tells Ana he wants a future with her. Eva believes that Armando is using her daughters to get to her. Andy confronts Esteban about Camila.

Camila has vanished, and Eva suspects that Andy has something to do with her disappearance. Virginia learns that Enrique did not get a divorce.

Eva promises to make amends for all the damage she has caused, but she is unaware that Marlene and Rebeca are already plotting against her.

Armando informs Eva about Marlene’s intentions, but she does not believe him. When she refuses his help, he turns instead to the Contreras agency.

Finally aware of Marlene’s plot against her, thanks to the efforts of Armando and Pablo, Eva takes steps to make sure it does not succeed.

Marlene lies to Aristobulo, blaming Eva for the loss of the cocaine. Diego is hospitalised after a seizure. Aristobulo confronts Eva about the drugs.

Eva manages to convince Aristobulo that Marlene is his true enemy, and he tells Armando and Marlene that he will kill them if they don’t pay up.

Armando is forced to sell Eva’s mansion to pay off Aristobulo. Enrique asks Virginia to marry him. Bobby wants to know the truth about Pancho’s death.

Federico, Soraya and Eva come up with a plan. A mystery buyer shows interest in Eva’s mansion. Pablo gives Betty’s letter to Eva.

Eva rejects Pablo and decides to go alone. Pablo and Armando get into a fight outside Eva’s house. Alberto advises Marlene to leave the country.

Armando and Marlene sign the papers for the sale of the mansion - and Marlene learns the identity of the buyer. Adriana has news for Eva and Soraya.

Marlene says she will not leave until she has made Eva pay. Eva tells Pablo she is going to be a grandmother. Adriana argues with Eva over Armando.


All Roads Lead to Love is on Telemundo Mondays to Fridays at 17h10. The omnibus is on Sundays at 12h10.

Pablo asks the judge to authorize Carmen Soler´s autopsy. Martin tells Eva to forgive Pablo. Martin tells Pablo if he does not get his game together he is going to lose Eva forever. Marlene thinks of a plan to kill Eva at Virginia´s.

Eva tells Pablo she will stay with Armando because she loves him. Robert gets Cynthia drunk. A doctor kicks out Marlene, who hears Marcos say that Florentino snitched on her. She runs.

Pablo tells Eva that Florentino confessed everything. Marlene urges Andy to run. Marcos does not find Marlene at the hotel. Rebeca is desperate. Marlene learns about Alberto´s detention and that the police are after Andy and her.

Soraya tells Cynthia that Florentino confessed to everything and they may find Pancho´s real murderers. Rebeca tells Marlene she will kill Eva. Andy is not well because of an overdose - Marlene is desperate.

A doctor verifies that Armando has no sensation in his legs. Andy tells Marlene of his intention to kill himself. Marlene wears a disguise as a nurse to see Armando. She is discovered and runs.

Armando is depressed because of his condition and because he has not seen Eva. Andy and Marlene watch news about them on TV. A nurse recognizes Marlene on television.

Pablo sees Cynthia´s recording and tells Soraya it will not be good enough for a judge. Pablo finds out that Marlene and Rebeca were able to fool the authorities and sense they will attack Eva.

Cynthia testifies in front of Marcos and is detained. Martin sees that Cecilia is sick and calls Ana. Marlene and Rebeca shoot at “Eva”, but they realize its one of Pablo´s traps.

Marlene escapes, but Rebeca is hurt and captured. Reynaldo and Ana kiss.

Robert denies the murder charges, and Cynthia confirms what they did. Eva finds out that Marlene wanted to kill her, that Virginia got married and that Armando is depressed. Pablo scolds Eva for hugging Armando and proposes that they set a trap for Marlene using Armando.

Pablo tells Marcos that with Elsa´s letter they might incriminate Armando. Andy tells Marlene that the Monteverde incriminated them for Pancho´s death.

Marlene thinks that Armando is back with Eva. Marlene issues a mortal threat on Eva. Pablo orders Jota Jota to find out where Marlene called from. Evencio gives Armando a rifle and a gun.

Andy and Marlene go back to Los Angeles. Alvarez informs Marcos that they have found an unidentified body.

The “coyotes” try to kill Marlene and Pablo and they shoot at him - a bottle is left with his fingerprints. Augusto approves surveillance for Eva´s family. Pablo learns that Reynaldo and Ana are a couple.

Armando tells Evencio that he will confront Marlene. On TV the pictures of Andy and Marlene are aired. Marcos sets up an operation, the Palacios run, they are chased. Armando has fun with Fabiola until Marlene calls him, she threatens to get him where it will hurt him most.

Marcos and Pablo meet with Marlene Palacios and her sister Andres, who returns from Mexico to get revenge against Eva.

Marcos and Pablo try to do everything possible to find the Palacios. Marcos and Augusto open the letter to read it and they find out that Armando is an accomplice to the deaths of Carmen and Sofia.

Eva meets with Marlene who threatens to kill all of them, but Armando surprises them. Adriana gets a message from Armando that he is in Monsol.

Armando thinks he is going to die and he starts to call everyone to say goodbye. Eva tells everyone that Pablo is out of danger. Marcos´s boss tells him to convince Armando to become a witness in the case against Aristobulo.

Marcos gets to Eva´s mansion to give her bad news. Eva and Pablo start to imagine their wedding. Pablo arrives in the mansion and ...

Repeat episodes will air on these days in the build-up to the new novela The Son I Never Knew which premieres on Monday, 23 January at 17h10.

We'll see you back here in the new year with the deets on what to expect.


Premiere episodes of All Roads Lead to Love air on Telemundo Mondays to Fridays at 17h10. The omnibus is on Sundays at 12h10.

This post first appeared on The Edge Search, please read the originial post: here
People also like
Pablo Bloc avec 4 couteaux à steak
News & Coffee, Barcelona
The Cage of the “Surreal” – Post 1 of 2
Netflix’s ‘The Great Heist’ Review: This is “The Robbery Of The Century”
Decorating on a Budget With Inexpensive Affordable Rugs
ThackzinDJ – Ingqumbo Yeminyanya EP
9 Absolutely Unmissable Things To Do In Guatape Colombia {Must Read!!}
Free Fun for Kids: Story Time at the Library
What do Heraclitus and Pablo Casals have in common?
Affordable Image Marketing Tools to Help Non-Profits Create Stunning Visuals
#MzansiVIP: 20 Most cherished and adorable Mzansi celebs