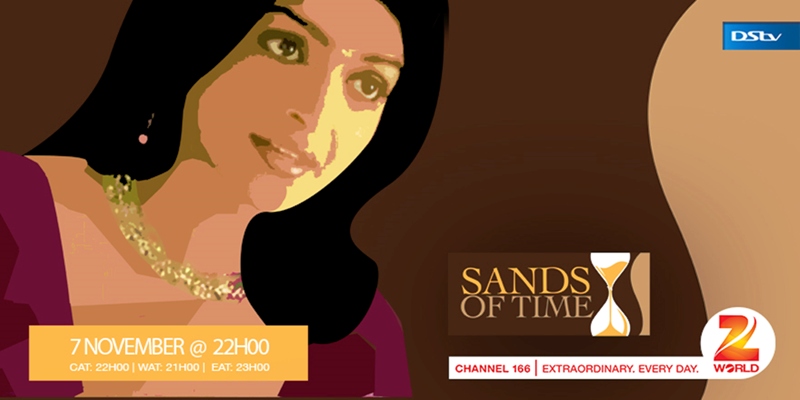 Sands of Time is on Zee World from Mondays to Fridays at 22h00.

Coming up on Sands of Time this December 2016:

Rukmani sees Aarushi with Rakesh and plans to send Aarushi back to her in laws. Savitri openly questions if Jia's baby is Shekhar's and Gynachand asks her to leave the house. Nethra misses Shekhar and declines all new work projects.

Savitri continues to create doubt in Rukmani's mind about Jia's pregnancy. Nethra comes to Mumbai for work. Jia asks Gyanchand to forgive Ananya for her past mistakes. Shekhar’s colleagues gossip about Jia’s pregnancy.

Rakesh comes to Aarushi's house and threatens to reveal the truth if she doesn’t meet with him. Savitri continues to cause trouble and provokes Rukmani, who isn’t happy about the pregnancy any longer. Gyanchand has a heart attack.

Jia is not allowed at the hospital. Savitri's influence has worked its magic and Rukmani openly blames Jia for Gyanchand's condition. Nethra has to stay longer in Mumbai and looks forward to seeing Shekhar.

Rukmani taunts and frustrates Shekhar so much that he tells Jia that he doesn’t want the child. Jia is heartbroken and decides to leave the Pandey house.

Shekhar tries to get hold of Jia at her mother's house. Jia misses Shekhar. Savitri tells Gyanchand about Jia leaving and his situation worsens.

Gyanchand refuses to go ahead with the operation without seeing Jia. Nethra visits Gyanchand and meets Shekhar’s family.

Gyanchand comes home and refuses to share a room with Rukmani. Shekhar misses Jia. Rukmani tries to bring Jia back home but is refused. Nethra dreams about being with Shekhar. Shekhar wins an award.

It's Jia's birthday and she remembers the good days from the past. Shekhar goes out in search of the criminals responsible for Jia's ordeal.

Jia tries to find a job to keep herself busy, but is unsuccessful. Gyanchand continues to ignore Rukmani, and Ananya and Nalin become the target of his anger. Gyanchand revises his will.

Jia visits her in law’s house and everyone thinks she's back. Shekhar’s path, towards finding justice for Jia, seems to be getting dangerous. Mr Shah's true identity is finally revealed.

Samar secretly becomes the surety for Jia's loan but Savitri finds out. Anand shows his support for Shekhar but plots to have him killed.

Nethra takes Shekhar to her house after the accident. Mr Shah wants to get rid of Shekhar at any cost. Samar finds Shekhar's car and tells the family about the accident. Jia goes to her in law’s house after hearing about Shekhar.

Nethra's grandmother tries to reason with Nethra about forgetting Shekhar. Manas tries to fix things between Jia and Shekhar. It's Diwali and the family miss Jia. Shekhar asks Jia to come back home.

Shekhar finds out the true identity of Mr Shah. Nethra cofesses that she loves Shekhar in front of her grandmother. Kamal tries to steal Jia's designs and Jia meets an old friend.

Nethra's grandmother tries to reason with Nethra about forgetting Shekhar. Manas tries to fix things between Jia and Shekhar. It's Diwali and the family miss Jia. Shekhar asks Jia to come back home.

Jia is back home and the entire family is happy. Savitri shares this with Nethra, who becomes furious at the thought of Shekhar with another woman. Manas discovers there's a problem between Jia and Shekhar.

Jia is happy with the change in Shekhar. Savitri continues to phone Nethra to stir trouble. Shekhar tells Manas about his problem with Nethra. Shalini is keeping an eye on Aarushi.

Jia receives Nethra and Shekhar's photos in an envelope, and Manas also sees them. Nethra's grandmother finds Jia's photos under Nethra's bed and speaks to Shekhar about Nethra's obssession with him.

Shekhar tells Jia about Nethra's obsession with him. The family is shocked to hear that Samar has made Nethra his new brand ambassador. Jia can’t stand to hear Nethra’s name.

Nethra's grandmother warns Shekhar not to cause any harm to Nethra, else she'll reveal the truth to his family. Devyani tells Samar that she's secretly planning Jia's ritual. Jia overhears Shekhar's conversation about Nethra.

Nethra attends the ceremony held for Jia. The family find out the truth about Shekhar and Nethra's night, and everyone in the house, except for Savitri is upset.


Sands of Time premiered on Zee World on Monday night (7 November) at 22h00, replacing Krishi which ended on Friday (4th).

The series airs daily and puts the spotlight on a highly underexposed theme: the impact of gang rape. The series centres round Jia, a woman who faces a struggle to get acceptance from her family and community after she is gang raped.

This is the official synopsis, followed by the teasers for the first month:

Jia's story is one of sheer determination and bravery as she offers herself up to her rapists saving her unmarried sister in law Arushi from them.
Saving Arushi may have been a noble act on Jia’s part and while her family appreciate her sacrifice, they are still unable to completely accept her back into the family. Jia is a quiet, accommodating daughter-in-law, intent on upholding her family’s honour.
Sands of Time traces Jia's difficult but courageous battle against the stigma - to emerge strong and stand tall in the face of a damning society.