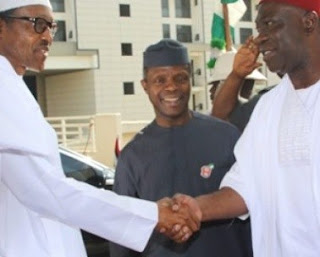 Deputy senate president, Ike Ekweremadu, has appealed to President Muhammadu Buhari to concede power if he loses in 2019, just like his predeccessor, Goodluck Jonathan did in 2015. Ekweremadu made the appeal today when he delivered a lecture titled ‘African Politics: The Dynamics and Lessons,’ in the UK.

Former President Goodluck Ebele Jonathan put Nigeria on the global map as a leading democratic nation when he put in everything to ensure a free and fair election, in which he not only lost the presidential poll as an incumbent, but also willingly conceded defeat. In fact, he called the incumbent President, Muhammadu Buhari, and congratulated him even before the announcement of the final results. In addition, neither former President Jonathan nor the PDP challenged the outcome of the election in court. Therefore, to whom much is given, much is also expected. The onus is now on President Buhari to likewise provide a level-playing ground and show uncommon statesmanship if he and his party lose the 2019 presidential election. That way, Africa’s biggest democracy will further entrench the culture of peaceful and smooth transfer of power from a ruling party to the opposition in both Nigeria and Africa.” he said

Ekweremadu warned Buhari of the consequences of “manipulating” the 2019 election, advising him to spearhead a free and fair election.