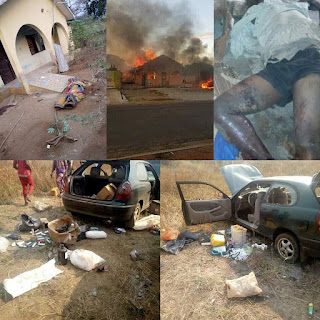 Following the explosion that rocked Okpella, the Governor of Edo State, Godwin Obaseki, has directed the commissioner of police and the Director of Department of State Services (DSS) in the state, to commence search for explosives and other weapons and dis-arm the militia group operating in the community.

A suspected bomb factory was uncovered in Iddo, Okpella, after one of the explosives exploded. One of the suspected bomb makers was killed in the explosion. One of the victim’s legs was also chopped off by the blast.
The building where the suspected bombs were manufactured is a three- bedroom apartment which the villagers said was occupied by some men from Kogi State.
A source in the village said youths in the area mobilised and nabbed some occupants in the building. One of the occupants, who reportedly escaped with a car loaded with prepared explosives, arms and ammunitions, abandoned the vehicle along a bush path and fled.

Former DJ Jörg Molt Claims Responsibi…
5 Steps to Get Rid Of Bed Bugs Infest…
How You Can “Let Not Your Heart Be Tr…
AFGHANISTAN - Peace Talks vs Attacks
What Is So Unique With The Baby Boome…
President of Iddo Youth Movement, Mohammad Mohammad, said: “We all came out when we heard the sound and informed the people that explosion killed somebody. When we got to the place one of the occupants we met immediately escaped in a vehicle.
So the youths gave him a hot chase shouting that he had killed somebody and he was subsequently arrested and taken to the Divisional Police Officer before his onward transfer to the area commander.” Wife of one of the suspects and her children were also taken into custody.