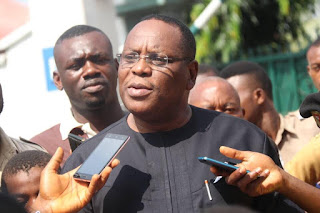 A journalist ran into Rt. Hon. Eziuche Ubani, the Abia State Commissioner for Works during his routine project inspection visit to Aba, the Commercial hub of the state and insisted to know what the Government is doing in the area of road construction given that Abians were promised that the government will take advantage of the dry season to do more work.

Journalist: Hon Commissioner Sir, Abians are worried that not much is happening on our roads in terms of construction works, what can you tell them?

Journalist: Can you tell us the areas you visited?

Commissioner: Some of the places I visited are PH/Road, Asannetu Mechanic Village and Second hand motor parts market, AsaUMUNKA-umuodo- Osusu-Aku/,the first road to be paved by the state (sadly)in Ugwunagbo since it became a local government area. I also visited MCC-Samec- Faulks/, Ahiankwo/Abayi, Udeagbala- Enugu/PH Expressway with spurs to Umuimo and AforUle..We’re not in Orji Kalu days when roads were built without proper surveys just for six months of applause says Ubani

Journalist: Udeagbala has been abandoned.

Commissioner: We stopped the former contractor handling the road because he was not meeting our standard. But Contract for full reconstruction of Udeagbala road has been awarded to same Chinese company handling the flyover at Osisioma- China Zighaou, they have been mobilized to complete the work on the road, and they will commence work before coming Tuesday. We plan to see that we reduce, if not eliminate, the stress of commuters into and out of Aba. What the company will do, beginning from Tuesday, is palliative work to make it an alternative exit and entry route into Aba, especially this heavy travel period of Xmas. We know our people are suffering now and we are not proud of it. We keep apologizing but we will work to try hard to change the situation.

We are also commencing the repair of failed sections of existing roads all over Aba and Umuahia in continuation of the Zero Pothole exercise. The new contractor on Udeagbala has been paid, so help to hold them responsible.

Let me use this opportunity to warn that we will come down very hard on commuters obstructing roads thereby creating unnecessary traffic snarls. Xmas is not a reason for rascality. We will not allow people travelling this period to be punished by the impunity of a few road users. Journalist: What is happening along Faulks Road, the Ifeobara area in particular?

Commissioner: Setraco is doing very serious work along Faulks Road. But there are two other issues left; those who have illegal structures on the 500 meters between Ifeobara and Express-road along Faulks Road, they have been marked and the residents of the area have been notified personally by me, We shall demolish such structures from Monday morning. This has to be done to enable the contractor complete the drainage on Faulks Road.

Journalist: When will work commence along Port Harcourt Road?

Commissioner: Setraco/Hartland are already on site along Port Harcourt Road, but one thing we need to fight is this attitude of residents of the area who are frustrating the work. The surveyors of the contractor on PH Road have returned to us with complains that they are being visited with hostility by people who live and do business on that road. Survey pegs are being destroyed and confiscated. Am astounded by this. People on PH Road have been shouting about the state of the road, now that we have gone to fix the road people in the area are conspiring to frustrate us. Journalist: What will Government do about that?

Commissioner: From next week, we shall come down hard on such persons. I pity anybody that will be arrested for this. Please pray for us to catch just one person, and the person will be used as good example. We shall begin to do the matter from Monday. We succeeded along Faulks Road. The same shall happen at PH Road. Trust us.

Journalist: But people complain that nothing is actually happening along Port Harcourt Road?

Commissioner: It is out of place to complain at this stage. No contractor can do much unless the surveys are completed to determine invert levels. The challenge on that road is where to drain the water and our only guide is survey. That was why I went there today. If they won't let us complete the surveys in time, then they are asking for this speed. And if they want to say what has survey got to do with it, then they should know that it is the most important thing. And without apologies I dare say that we are no longer in the OUK days when roads were built without proper surveys just for six months of applause.

Journalist: Governor OVI must be commended for the road he is opening up to link up Akwa ibom. What is the current update?Commissioner: I will tell you the story of that road. Governor and I share a personal connection to the Umuaro-Ekwereazu(Abia)-NtoEdino (AkwaIbom)road.

While I was a member of the House of Reps, I did a paper to the NDDC to construct the road so as to connect Ururuka Road to Umuahia-Ikot Ekpene Road as a way to strenthen the economic ties between border communities.The NDDC agreed and awarded the contract.Then Dr Ikpeazu and I went to flag off the road. Contractor went to site and after the initial mobilization, funding was cut off.

Today I can confirm that work is ongoing courtesy of Abia State Government.

I confirmed the value of the road when IPOB occupied Afara and Aba Road UMUAHIA.Every day of the Operation Python Dance I followed that road to work avoiding both the python and its' dance partner.


This post first appeared on NnekaTorti, please read the originial post: here
People also like
Disabled My Black A**! One Legged Man Wins Bizarre Road Rage Fight
I-81 in Pennsylvania remains closed after pileup that left at least 3 dead, 20 injured: What we know
Nextbase Dash Cams – Free Memory Card + Free Shipping
Develop a Cooking Recipe App Like Tasty and Monetize Your Culinary Skills
Robert Pattinson Beard & How You Can Ace This Thick Style