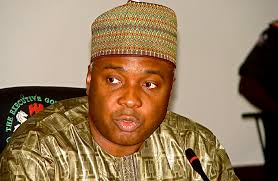 The Kwara state government says a former governor of the state now Senate President, Bukola Saraki, has returned all the pension he has received since leaving office and becoming the Number 3 citizen. Saraki had written to the state government to stop paying him pension and also refunded the ones paid to him after the Socio-Economic and Accountability Project (SERAP) raised an alarm that the senate president and some former governors, who now hold political office, were receiving double pay.

However, it was silent on whether the house it reportedly bought for the senate president had also been returned.