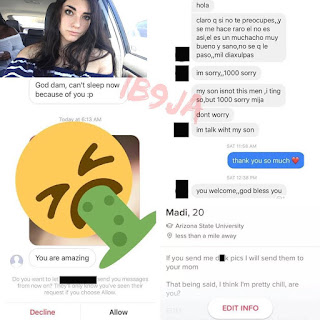 A 20-year-old lady has been forced to send an unsolicited photograph of a penis to the sender’s mother. The sender was not previously known to the young lady, though.
On her Tinder wall, Madison Kohn writes as part of her dating biography, “If you send me dick pics I will send them to your mom.” She confesses, “I had just been fed up with receiving them in the past and my friends have also received them.”
While most male visitors to her wall respected the warning, one man decided to put her to the test. A user called Ryan located her Instagram account from the link in her Tinder profile and decided to slide into her DMs.
He sent her a barrage of sexually explicit private messages – which Madison didn’t respond to – and then topped it all off with a photo of his penis at 6.13am. This sent Madison raging.

Why Should You Visit Russia? 25 Cool …
The Book Depository – 36% off The Bri…
4 Job Interview Tips: How to Make a G…
Is Botox Poisonous to Patients?
What happened to love? Did it die of …
Madison used her super sleuth skills to figure out who the guy was, using the full name and location he had on his Instagram bio. She then managed to find his Facebook account, and worked out who his mother was.
Madison, a student of Arizona State University, U.S, then proceeded to forward a screenshot of the offending message to his mum, asking her to ask her son to stop sending such images to women.
Madison received a reply from the guy’s mum the next day – in both English and Spanish – apologising profusely for her son’s behaviour.
As reported by Metro, Madison said, “If this is a continuing trend, I hope not only myself, but others will shut down Dick Pics either by sending it to the users’ moms, or in their own creative way.”
She adds, “It’s just a matter of getting the minority to understand that it’s unacceptable and gross, which is what led me to messaging his mother. I’m just glad that I could create more awareness.”


This post first appeared on NnekaTorti, please read the originial post: here
People also like
Why Should You Visit Russia? 25 Cool Things to do, Where to Stay, Things You Need to Know & MORE
The Book Depository – 36% off The Bridgerton Collection: Books 1 – 4
4 Job Interview Tips: How to Make a Great Impression
Is Botox Poisonous to Patients?
What happened to love? Did it die of COVID?
The Friday Roundup – Story Telling, YouTube Growth and Audio
Famous Girls With Beard – Causes, Treatments & More
Martha Millan Interview: Fiona’s secret on The Cleaning Lady
ALBUM: Luudadeejay, Balcony Mix Africa & Major League DJz – Groovers Prayer