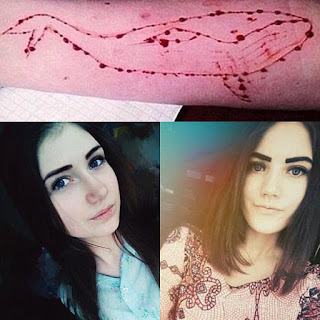 A teenage girl in Spain has been admitted to hospital after it emerged she was playing a terrifying new 'suicide game' called the Blue Whale Challenge.
The 15-year-old was saved from killing herself after her family found out she had signed up to the challenge and tipped off the authorities.
It will add to concern that the challenge - thought to be behind a string of teenage suicides in Russia - is gaining popularity in Western Europe.
The girl at the centre of the Spanish scare reportedly began a series of daily challenges, which included self-harming herself on her arm with a knife and going to a nearby station to watch high-speed trains rush past.
She is understood to have signed up to killing herself by throwing herself under a train - but became so absorbed in the game she was playing that she confided in a relative who alerted the police and health officials.
Police are said to be probing at least 130 suicides across Russia which they fear are linked to the online craze. The deaths of Yulia Konstantinova, 15, pictured left, and Veronika Volkova, 16, right, were connected to the challenge in Russia.

Quick Tips To Talk Yourself Down From…
I was nervous about switching therapi…
Q&A with Phil Yates: Shaping the Futu…
CBD Capsules Or CBD Oil Tinctures: Wh…
As well as using a knife or razor to make the shape of a whale on their wrist or leg, players are also urged to watch horror movies all day and to wake themselves at 4.20am.
Players are given a master who controls them for 50 days and each day they are given a task to complete. On the 50th day the masters behind the game instruct the young people to commit suicide and sadly across the world some have done this.
Police officers in Britain have previously posted online warnings to alert parents about the challenge.